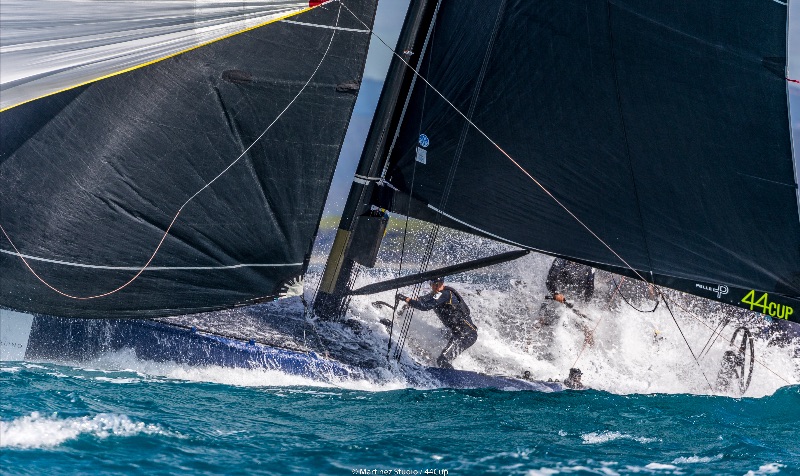 Conditions could not have been better for day three of the 44Cup Scarlino World Championship, the fleet coming out two hours ahead of the original schedule to make the best of the breeze, which was already knocking on the door of 20 knots and had the effect of mixing the results up.

By the time the first race started at 1000, the wind was firmly 20 knots and spent most of the day in the low 20s, frequently gusting more.

Blowing off mountainous Tuscany, the offshore breeze was shifty and puffy. It caused numerous lead changes and seemed to favour no one. Thus, to make up the schedule after a lost opening day four races were held. Each featured a different winner.

The overall 2021 44Cup leader, Igor Lah’s Ceeref powered by Hrastnik 1860, got off to a strong start winning the day’s opening race, but then a collision with Aleph Racing in the next meant they came home last with a two-point penalty imposed on them for ‘hard contact’.

Meanwhile, Nico Poons’ Charisma team was sailing a blinder. Winning today’s second race caused them to move to the top of the leaderboard, tied with Artemis Racing. The Swedish team showed excellent consistency, despite the difficult conditions. But, as is proving typical here, this position was short-lived for both as they scored deeply in the next race.

In this race, Chris Bake’s Team Aqua finally scored a bullet, propelling his team up to second overall as Aleph Racing took the lead.

“It was pretty tricky,” admitted Bake later. “But what beautiful conditions – sunny, breezy. It was a full-on day today, but it was good. All the boats are going really well, one mistake and you are toast – you’ll get spat out mercilessly.”

Team Aqua’s tactician Cameron Appleton added: “It has been a battle. This fleet is tight and we’ve had tricky conditions to execute all the time out there. We always know we are capable of it; we just have to connect everything together.

“We finally got a good start and sailed well in the placement up the course. As soon as you get your nose out, things become a bit easier than when you are in the back of the pack trying to fight your way out of there, because you don’t get much room in this fleet.

“The fleet is so close and everybody just knows how to sail the boats well. Every regatta this year has been windy, so we don’t have to worry about that anymore. It is now about going out there and positioning better and doing the basics well. It is going to be a good battle all the way to the finish.”

“We have always known in this fleet that it is important to be always up there,” explained Aleph Racing tactician, Michele Ivaldi. “You win regattas with an average of 3.5-4 points, so if you manage to squeeze in seconds, thirds and fourths, you end up in good shape.”

Consistency has been the one difficult thing to achieve in the blustery conditions this week. Even the leader’s average score has been just under 4 four per race.

“With the offshore wind there are huge shifts, as much as 30° during a single race,” continued Ivaldi. “I think we managed to start reasonably well and be able to sail the first shift and then you have to sail the wind that you have and try to get out of phase as little as possible….”

In the final, race victory slipped through the fingers of Pavel Kuznetsov’s Atom Tavatuy, not once but twice. Firstly, a beneficial shift while on starboard propelled them into the lead at the first top mark rounding.

“We started very nicely on the downwind and gybed at the right time and we were leading by 100 metres,” tactician Evgeny Neugodnikov recounted. “But then the wind dropped to 12-13 knots and Charisma got in front and we were still second [Charisma going left as they went right at the gate].”

There was another roll of the dice up the second beat, as Artemis Racing did well on the right to lead at the second top mark rounding with Atom Tavatuy, a close fourth behind Vladimir Prosikhin’s Team Nika.

Gybing early and splitting from the leaders, Kuznetsov’s team rolled Team Nika and was again in contention for the lead, but Artemis Racing and Charisma covered to leave Atom Tavatuy third.

“It’s nice weather, nice wind and very close racing – like usual! I hope tomorrow we will be better,” Neugodnikov concluded.

Sunday local time, the final day of the 44Cup Scarlino World Championship, racing is scheduled to start at 1100 CEST and with three or four races likely to be held, weather permitting any of the top eight boats remains capable of winning.