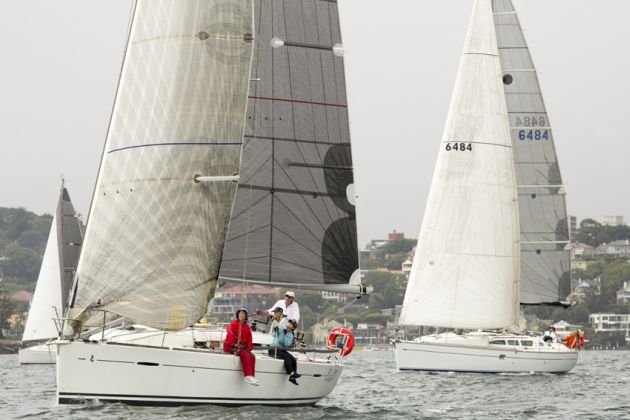 Ian Guanaria sailed his Beneteau First 35, One More-No More to its first double win of the Cruising Yacht Club of Australia’s Grant Thornton Short Haul Series on the weekend, leaving it until the final race to win decisively, while Phil Cutts took out the series overall with Assassin, his Farr 40 One-Off design.

“It was an interesting race. It was 10-12 knots in the Harbour, but 7-10 offshore and variable. The seamark wasn’t where we expected, and we had to sail back to it. As the biggest boat in the fleet, we were out in front and saw others sailing to a mark we didn’t think was in the right place,” Cutts said.

However, he and fellow Assassin owners, Ryan Brook, Tom Egan and John Vandervord, along with the rest of the crew, were very happy to decisively win the series overall from Peter McClelland’s Jeanneau Sunfast 37, Macscap and Ian Arthy’s Beneteau Oceanis 311, Jublilee, which was the Division 2 series winner from Indefensible.

“We only bought the boat from Robin Crawford two years ago and it’s taken two years to get the crew up to speed,” Cutts commented, thrilled after also winning the Grant Thornton Passage, Spring and Autumn non-spinnaker series.

“We’re planning to move to spinnaker racing next season, to the SOPS series, which will be a whole new ball game, and really looking forward to it. We’re now looking for a young fit person to fill the bow position,” said Crawford, whose immediate plan is to sail in the Land Rover Winter Series. So there are a few opportunities for bow tryouts during the series.

Race 13 of the series ended on a high note when the fleet left Sydney Harbour in a beautiful north-north/easterly, but Guanaria, who won the race under PHS and IRC, said when they left the Harbour behind, they also left the breeze there.

“It was light offshore with a 3-4 knot southerly set,” Guanaria confirmed of the race, which he won under PHS (PHS decides the series) by over three minutes from the Cavalier 37, Indefensible. One More-No More also won IRC, over Justin Pelly/Sean Rahilly’s Crosshaven by nearly five minutes, and in doing so, took out the IRC Series overall from Crosshaven, a Sydney 36 cruiser/racer.

“It’s the first time this season we’ve won the daily double. The PHS fleet has been very competitive this year. The race came purely down to navigation. It was whoever found the sea mark first,” Guanaria said of the mark, which was laid approximately four nautical miles off the Heads. “Most of the fleet sailed high, while we sailed low, and got ahead of Assassin, which is bigger than us. Then we just had to bear away to the mark.”

From there, the fleet sailed to Manly East and then Manly West before crossing the Watsons Bay finish line.

“We had two new crew for the race, but there were no mistakes. We managed to use our jib top sailing out and back – it allows us to hang on to the bigger boats,” ended the yachtsman who said it had been an interesting and varied series sailing against a good bunch of boats. He and others in the series are now looking forward to the Land Rover Winter Series which starts on Sunday 24 April.