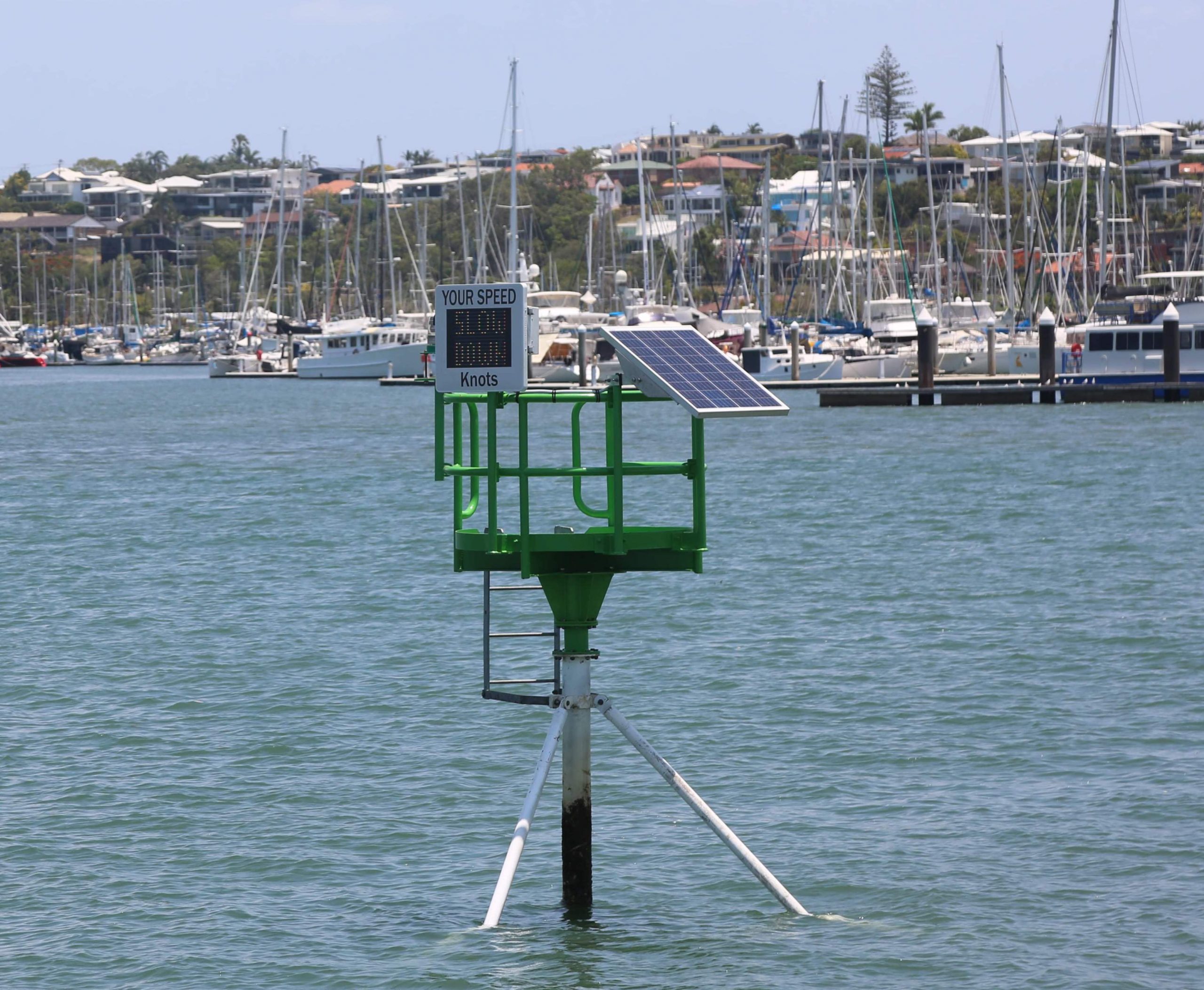 Well, pretty soon you could be seeing them on the water too, following the success of a trial commenced by Maritime Safety Queensland in December of last year.

Feedback from our colleagues in road safety about their use of Speed Awareness Monitors (SAM) on roads around Queensland was that they have helped modify driver behaviour, causing drivers to reduce speed and better observe signposted speed limits.

So, armed with this knowledge and anecdotal evidence that boaties leaving and entering boat harbours are often travelling too fast (which can cause damaging wash) Maritime Safety Queensland decided to trial its own SAM. We selected the entrance to the popular Manly Boat Harbour in southern Moreton Bay as a suitable place to trial the initiative.

The entrance to the boat harbour is a gazetted 6-knot speed zone.

Our SAM was installed on 19 December. Even before the encouraging data about its effects rolled in, we got a feeling the initiative would prove a winner with the boating public when our post announcing it on the Department of Transport and Main Roads’ Facebook page attracted in excess of 33,000 views and more than 160 shares.

Comments made about it were overwhelmingly positive, with many requests for similar signs to be installed at other locations.

Then came the data.

Over the Christmas period, 64 percent of vessels detected by our SAM were travelling in excess of the 6-knot speed limit. Sadly, the fastest were travelling at up to 29 knots!

Significantly, about 41 percent of vessels reduced speed when approaching the speed sign. This indicated the sign was proving to be an effective education tool, giving skippers immediate information about their vessel’s speed and allowing them to adjust their behaviour.

This modification of speeding behaviour was, and remains, overwhelmingly the primary reason for deploying the speed sign.  But there are other benefits.

In addition to providing us with data on speeds, the sign also provides valuable insights into traffic density and vessel usage patterns, and the ways in which our waterways are used.

This is the kind of information we’ve never previously been able to get without using resource-intensive methods such as placing staff at boat ramps for many hours at a stretch to simply count traffic.

Having access to this kind of data could, for instance, help us to plan education campaigns.

“One of the areas we need to improve in, if we want to be an effective maritime regulator in the modern age, is getting better data at our disposal about our customer base and enhancing our analysis of it,” said Maritime Safety Queensland General Manager, Angus Mitchell.

“Historically, it has not been easy to get some kinds of data without conducting surveys. While surveys are still useful, they are labour-intensive and not always as accurate as we’d like.

“Early indications are that speed awareness monitors will help improve our data capabilities while also producing a safety benefit”.

Given the positive effect of our SAM at Manly in reducing vessel speeds there, MSQ is already planning to expand the program and install more signs in Queensland’s waterways.

The most likely location for the next one is in the Noosa River, where representations from the local council, residents, visitors and businesses about speeding craft, particularly in peak holiday periods, suggest it could be very usefully deployed.

Watch out in the future for a SAM near you!