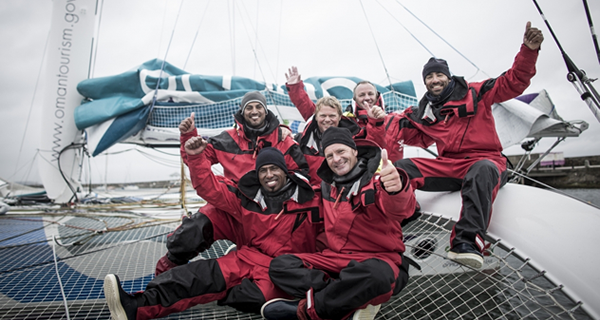 The Oman Sail team after their Round Ireland record. Photo Oman Sail.

The Sultanate of Oman’s MOD70 Musandam-Oman Sail has smashed the record for sailing around Ireland. The six-man crew, skippered by Sidney Gavignet, and including Omani sailors Fahad Al Hasni, Yasser Al Rahbi and Sami Al Shukaili, key members of last year’s Round Britain and Ireland world record setting team, plus Spain’s Alex Pella and French multihull veteran Jean Baptiste Levailland, crossed the finish line beneath the Kish Lighthouse off Dublin Bay just before 1000 UTC having started their record attempt at 1704 UTC on Monday.

They needed to be back by 1500 to take the record but their breakneck speeds down the west coast of Ireland, at one stage reaching 38 knots, meant they were finished well before that, some three hours and 50 minutes faster than the 44 hours and 42 minutes set by Steve Fossett in his first ever world record back in September 1993 aboard his 60ft trimaran Lakota.

Helmsman Fahad Al Hasni said this record attempt coming at the end of a European winter, had proved tough. “It was both scary and exciting because we saw 40 knots of wind and massive waves that we reckoned were around six metres but the main challenge was the cold,” said Al Hasni. “It is still winter here and my hands were so cold I still can’t feel them but I’m really happy because there have been some very famous sailors who have made attempts on this record but we are the ones who now hold it. We have become a really good, tough team and it feels great to be part of it.”

It had been a challenging but amazing experience for the Omani sailors, added Gavignet, who was full of praise for his crew.

“This was a real test for them and they came through with flying colours – the whole crew put in a great effort. We had to be very careful in these conditions and had no choice but to slow down at times but to have achieved the record so early in our season is a great feeling. It had been a priority and now it is done.”

This was Musandam-Oman Sail’s second attempt on the Round Ireland record. Two years ago they set off from Dublin Bay with high hopes but were forced to abandon due to unsafe conditions.

Today was a different story and everyone on board was delighted to add this one to their burgeoning collection.

“This is a great accomplishment for Oman and Oman Sail,” said David Graham, CEO of Oman Sail. “Attempting to break the Round Ireland record has been our goal for many years now and achieving the feat is a shining example of the hard work and dedication of our sailing squad.

“Racing against yourself to set a time is the hardest test of discipline. The team must remain focused and motivated at all times, and we have instilled these values since the start of the Oman Sail programme.

“With a 50% Omani crew, this record shows that the present and the future of sailing in Oman is on the right course.”