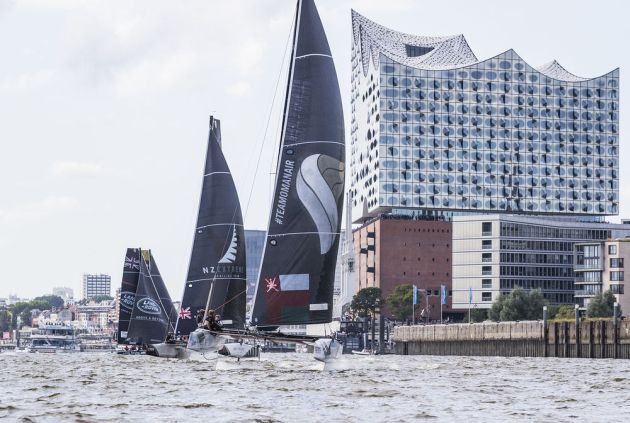 Oman Air took its second Act victory in a row in a thrilling Hamburg finale on the River Elbe. Photo Lloyd Images.

Oman Air took its second Act victory in a row in a thrilling Hamburg finale, despite last minute pressure from SAP Extreme Sailing Team. The triumph sees the Omani syndicate move into pole position in the overall rankings.

“We're over the moon,” said a grinning Phil Robertson, skipper and helm of the Omani-flagged squad, who adds to his growing tally of recent sailing successes, which include wins in the World Match Racing Tour and M32 World Championship, as well as in the previous Extreme Sailing Series Act in Barcelona.

“The fight was on today and the boys fought hard. SAP Extreme Sailing Team was sailing well and getting win after win so we knew our lead was getting smaller, but we didn't panic, which was key,” commented Robertson, whose team has sat top of the Act podium since race one.

“I'm going to put my feet up for a week, that's for sure,” added Robertson, whose winning crew included Pete Greenhalgh, Ed Smyth, James Wierzbowski and Nasser al Mashari.

The battle for glory between SAP Extreme Sailing Team and Oman Air went down to the wire, however even a win in the final double-points race wasn't enough for the Danes, who needed to put at least two boats between them and their rival to finish ahead.

“It was super close out there. We started off strong but Oman Air sailed really cleanly and we just couldn't catch them.” said Adam Minoprio, helm of SAP Extreme Sailing Team, whose team finishes just three points shy of the Act champion having started the day with an eight-point deficit.

“It was good to take the final race for bragging rights as you're only as good as your last race. We look forward to Cardiff and to getting one back on Phil, and we're really enjoying the close competition,” added the Kiwi sailor, whose team drops from first to second on the 2017 podium, tied on points with the leader.

Red Bull Sailing Team finishes third and was awarded the Zhik Speed Machine Trophy, with insights from SAP, for the second Act running, for reaching the top speed of the regatta at 23.9 knots. The team remains fourth overall.

At some point during the Act, each of the top six finishers have had a turn on the podium, with the constantly shifting scoreboard demonstrating just how tricky the racing has been for the international fleet of world-class sailors.

The biggest upset of the Act sees Alinghi finish sixth and drop to third on the season scoreboard, a devastating blow for the 2016 champion, who led the 2017 rankings for the first three Acts.

“We feel really disappointed because we didn't sail well at all, but the other teams deserve it. It wasn't our regatta and we need to work harder for the next one to come back in to the game.” said co-skipper Arnaud Psarofaghis.

“The crew did a good job the whole regatta but we were just off pace, made some bad decisions tactically, and that put us in a bad situation.”

NZ Extreme Sailing Team follows the Swiss in fourth, having suffered a damaging blow to its scorecard in race 14.

“We were launched off the first race but we got pretty beaten up and ended up last, so it was tricky to bounce back from that. Just as we got some momentum going, we ran into the ground in the pre-start and weren't able to race so that was hard to build from,” explained co-skipper Chris Steele.

“Fourth is the best result for the team so far this year, the learning curve this week has been awesome. I really feel like we've taken two steps forward, so hopefully we can take them to Cardiff,” added Steele, whose team leapfrogs Land Rover BAR Academy on the overall scoreboard to take fifth.

Despite a strong start to the day for Land Rover BAR Academy, who posted a first and a second in the opening races, the young British syndicate finishes the Act in fifth, two points ahead of Alinghi and tied on points with the Kiwis.

The penultimate Act of the Flying Phantom Series was won by Red Bull Sailing Team, who has dominated the competition since the first stage in Madeira Islands. Kiwi sailors Olivia Mackay and Micah Wilkinson racked up an impressive 15 podium finishes, including five wins, from 17 races. Culture Foil, sailed by Eric Peron and Théo Constance, follow in second with ZEPHYR by Idreva, sailed by Charles Hainneville and Antoine Rucard, in third.

The international fleet of GC32s will reconvene in Cardiff in less than two weeks for the sixth Act of the eight-Act season, headlining the Cardiff Harbour Festival. The UK stage will also see the champion of the 2017 Flying Phantom Series decided. More information about the event can be found on the official website.