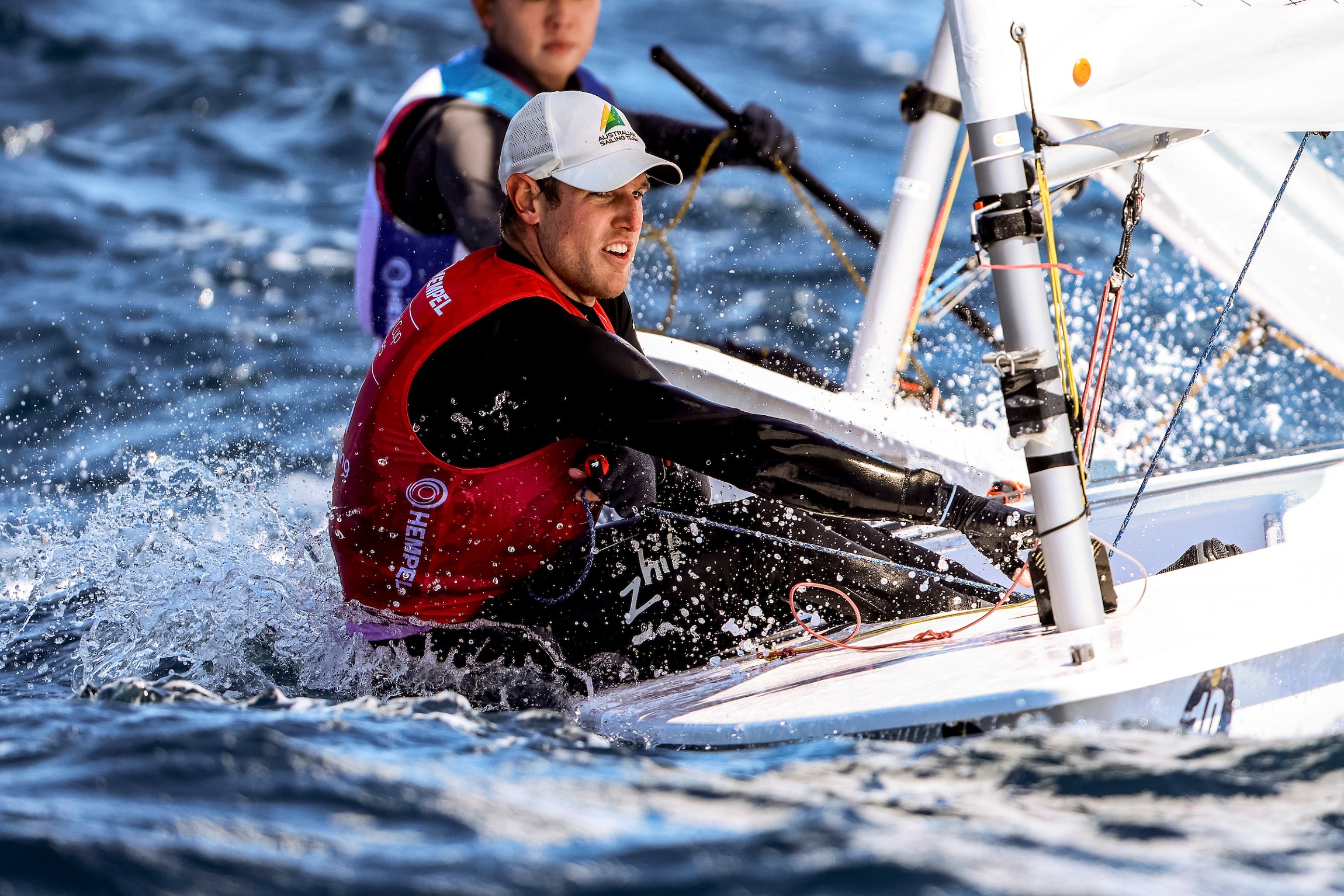 Hyères has hosted the elite of Olympic sailing for more than 50 years and more than 1,000 sailors from over 50 countries are expected to compete in the ten Paris 2024 Olympic classes at this post-Covid comeback edition. The venue is renowned for its technical and tactical challenges as well as its strong easterly winds.

Following the Hempel World Cup Series at the Trofeo Princesa Sofía in Palma, Spain a couple of weeks ago (1-9 April), the French Olympic Week is only the second international all-class regatta since the Tokyo Olympic Games and in the shortened Paris 2024 cycle.

“Our AST and ASS (Australian Sailing Squad) athletes exhibited a strong start to the 2022 season and left Palma with many performance experiences to analyse and capitalise on. After their time together in Palma the energy and excitement within the team has continued to grow,” Australian Sailing High Performance director Iain Brambell said in the lead up to Hyères.

Brambell will be guiding the team at the French Olympic Week together with Australian Sailing Technical Director and three-time Olympic gold medal winning coach Michael Blackburn, with the team featuring several returning Olympians as well as some new additions, including a new-look high performance leadership and coaching team.

“Following our pre-departure camp in Sydney, the team worked really well together going into Palma with all the regular wonders of international travel, container logistics and COVID protocols. Hyères will be another welcome opportunity to refine and further explore the learnings from the Palma regatta and to get back into big fleet racing. It will also be one of the few all-class events before our crews will head to their individual class training camps, World and European champs,” Brambell added.

The French Olympic Week will mark the start of a new campaign for Rio Olympic ILCA 7 champion Tom Burton, who together with Simon Hoffman will make his international debut in the 49er at Hyères.

“This will be the first big regatta in a 49er for me. We have done a bit of training at home and a few races, but this is the first event for me with a lot of boats and many elements of a big regatta just can’t be simulated. It’s going to be a steep learning curve, but I’m really looking forward to it,” Burton said about the new challenge.

“If we can improve each day and take more steps forward than we do backwards I think we will be pretty happy. We will have a few more big-fleet regattas later this year in Europe to hopefully be as comfortable as possible heading to the Worlds in Canada later this year. That’s the big regatta we want to give our best performance for, and I hope the whole Australian squad can be racing near the front of the fleet,” Burton added about the goals ahead.

For Burton, it is a new beginning on several levels with the 32-year-old becoming a dad for the first time only recently.

“Leaving my wife and newborn in Australia was definitely tough and a much different feeling to years of spending lots of time away in Europe. So, this first trip will be short and a little test trip to see how it all goes. I will head back home after Hyères and come back for the Allianz regatta (Hempel World Cup series) and Kiel regatta a month later,” Burton said, explaining his plans.

“Being back in Europe is pretty exciting, it actually feels like I was only here yesterday to be honest. I’ve spent a lot of time here over the years and being at a big regatta again is pretty cool. Although there’s more going on at home than there used to be,” Burton added laughing.

London Olympic silver medallist Olivia Price (NSW) also makes her return to the international racing circuit this European season, after teaming up with Evie Haseldine (NSW) in the 49erFX. They are joined by Laura Harding (NSW) and Annie Wilmot (NSW), with both crews coached by 2020 49erFX World Championship winning coach, Victor Paya.

Tokyo Olympic ILCA 7 champion, Matt Wearn (WA), kicked off his Paris 2024 campaign with a silver medal at Palma. He will make the most of another racing opportunity at Hyères with the regatta the final rehearsal before the 2022 ILCA 7 World Championships in Mexico at the end of May.

Australia’s ILCA 6 (former Laser Radial) sailors have their world championships in October, so will continue to race on the European circuit over the next couple of months to gain as much international fleet racing experience as possible until then. Western Australian Elyse Ainsworth was the stand-out performer in Palma when she made her first medal race and finished 10th.

“I was really stoked to make the Medal Race in Palma and it was such a fun experience, I can’t wait to do it again. However, my goals remain the same and nothing really changes from a performance point of view. I’m just focusing on the process of getting good starts and working on my psychology. It’s as simple as that,” Ainsworth said.

“I think that our results have been building from the year before and we have all pushed each other really hard. It was exciting to see all of us do well in Palma and we are certainly becoming a force to be reckoned with.”

“The new coaching line-up is creating a really good balance of knowledge and skills between the two coaches. Although it has taken some adjusting, it certainly seems to be working.”

After a cycling camp post Palma and some time to kick the feet up as well, the group is excited to get back into it at Hyères before heading to the Allianz regatta in the Netherlands and Kiel Week in Germany, along with multiple training camps.

Tokyo Olympians and Rio silver medallists Jason Waterhouse (NSW) and Lisa Darmanin (NSW) will also be back in action at Hyères after being sidelined by COVID-19 and missing the first couple of days at Palma. After their fifth place in Tokyo, the cousins will have the chance for a rematch with gold medallists Ruggero Tita and Caterina Banti from Italy and the silver medallists from Great Britain, John Gimson and Anna Burnett, in the 31-boat fleet.

The 470 double-handed dinghy is being sailed as a mixed double for the first time as an Olympic event this Olympiad with two Australian crews to test their skills in a big fleet of 59 entries from all around the world at Hyères.

Also debuting as an Olympic class on Hyères waters is the iQFOiL, which has been selected as the windsurfing equipment for the 2024 Games.

Featuring a foil allowing it to fly on the water, Australian Sailing Squad’s iQFoil sailors Grae Morris (WA) and Caelin Winchcombe (WA) are keen to test their skills against the world’s best including the French hosts, who have been dominating the new format winning recent World and European championships. They are coached by Olympic coach Arthur Brett, who mentored Michael Blackburn and Tom Slingsby at the Athens and Beijing Olympics respectively.

KiteFoil is another new discipline, which will take its Olympic place for the first time at Paris 2024. And while Australian Sailing Squad’s Breiana Whitehead (QLD) has raced internationally before, these regattas mark the first time she has done so as part of an international Olympic class regatta.

“It’s exciting to have the Kites being a part of the world sailing circuit and I really enjoyed being a part of the Olympic class regatta in Palma. 2019 was the last time that I was able to compete internationally, so it has been really fun to race against the best girls in the world again,” Whitehead said.

“Palma was not without its challenges, as we had some tricky conditions and really close racing. Being the first regatta back after such a long time of not competing at this level, I found I made quite a lot of little mistakes that added up,” the 21-year-old said.

“It is only the start of the season and I am looking at Palma and Hyères as learning events. So as far as Hyères goes, I want to learn as much as I can, have fun, and enjoy being able to race with the really fast girls,” Whitehead concluded.

Racing at the French Olympic Week starts on Monday, 24 April 2022 with the opening series spread across five racing courses on the bay.

Results and entries can be viewed here.