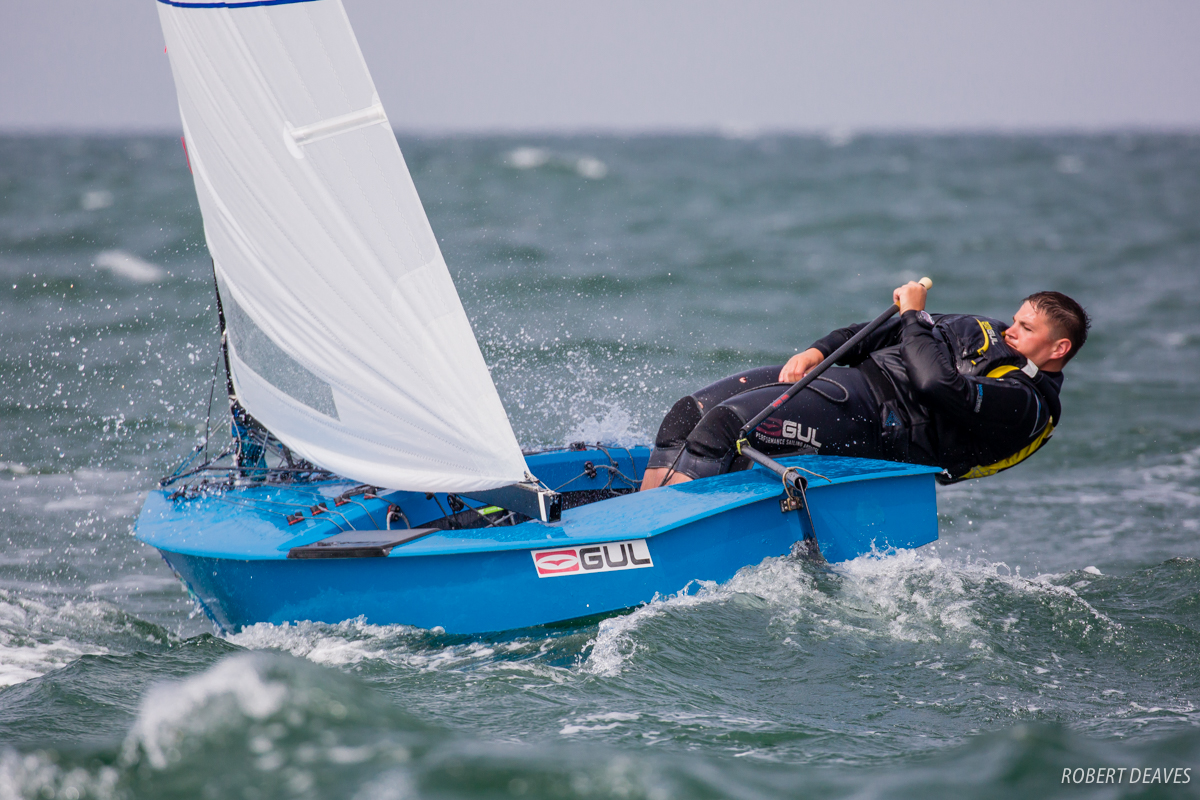 A huge fleet of around 140 OK Dinghies from ten countries is all set to begin the 2018 World Championship in Warnemünde, Germany. It is the second largest OK Dinghy world championship fleet ever and underlines the growing relevance of the class on the international stage.

The class is attracting sailors not only from among its usual club based fleets, but also an increasing number of top sailors from other classes looking for highly competitive racing in a friendly fleet that knows how to have fun.

Equipment checks and preprations are almost complete in Warnemünde, ready for the start of racing on Tuesday.

The fleet this year includes a host of former world and European champions, as well as a group of former top Finn sailors. Last year’s world champion, Nick Craig is missing, but Britain has a very strong team with 2004 and 2016 world champion, Jim Hunt in the mix along with top UK sailor Charlie Cumbley, who had taken a string of medals at championships over the past three years and also the Spring Cup earlier this year, but has yet to win a major title.

Hunt was under no illusions as to the scale of the competition ahead, “I think it is going to be very, very difficult. I think there is an assumption that Freddy is going to be the man to beat and I think that’s a pretty fair assumption. I am more looking like somewhere in the top five if I do well, but I have no idea how I am going to do and no idea who is going to be up there. I think it could go anywhere.”

From the home country, André Budzien already has two world titles to his name, in 2012 and 2015, but this year he is joined by former Finn Junior World Champion, Jan Kurfeld, who started in the class last year and more recently took a confident win at Kieler Woche in the most competitive fleet of the year so far.

Kurfeld is relishing the opportunity to race in such a large, high-calibre and competitive fleet this week. “I am really looking forward to the week to race against great sailors like Freddy Lööf, and plenty guys from Australia, Scandinavia and Great Britain, so it looks to be a very competitive fleet. I am also looking forward to nice sailing conditions, though I would prefer tough sailing conditions, with stronger wind, so hopefully there will be no light winds.”

Denmark also has several contenders with double European champion and former World No. 1 Bo Petersen keen to claim a world title. Petersen recently took silver at the Nordics, behind the former Finn World Champion and 2012 Star Olympic gold medalist, Fredrik Lööf. Lööf sailed OK Dinghies briefly when he was 17 before starting his Olympic career, and after winning the Nordics in June, didn’t take much persuasion from the fleet to take part in these worlds. Lööf last sailed in an OK Dinghy world championship back in 1987, when he placed fourth. Understandably, he is one of the main favourites for the title though didn’t have it all his own way during the pre-worlds racing.

With the large number of entries, the fleet is being split into two groups and sailed on trapezoid courses for the first time in the history of the class. The class used to limit entries to 80, but the growth of the class worldwide, and the interest in competing at the worlds led to an open entry system. This will be the first world championship sailed in two separate groups.

Other former world champions taking part include Thomas Hansson-Mild and Mats Caap from Sweden, as well as the current World No.1 Greg Wilcox, from New Zealand.

Wilcox said, “It’s probably going be one of the best, or one of the most competitive, worlds ever in terms of the amount of people who can win it or get into the top 20, and the amount of people who can win races. Especially with two different fleets it is going to make the points much closer all the time, so it’s going to be very interesting and hopefully a lot of fun.”

Last year, former Europe world champion, Lars Johan Brodtkorb, from Norway, was offered an OK Dinghy to sail the European Championship. He surprised most of the fleet by winning the title after just three days training. He is back for more this year in his first OK worlds and is sure to be among the top contenders.

Most of the fleet have now arrived in Warnemünde and are undergoing equipment checks and last minutes preparations, though on the water practice has been limited by the strong winds that have blown on three of the last four days.

The Pre-Worlds regatta suffered from too much wind for the first two days, with all racing cancelled as 30 knots winds buffeted Warnemünde, but on the third day 56 boats got in three races in a gradually dropping westerly that started with quite a high sea left over from the previous days. Former world champion Budzien dominated, including winning two of the races. Current European Champion Brodtkorb, from Norway was second with British champion, Luke Gower in third. The third race was won by Jan Hempel Sparsø, from Denmark.

All things considered, the fleet this year is probably the most competitive and successful group of sailors ever to challenge for the OK Dinghy World title. Over the next five days, class knowledge and experience will be being pitted against some outstanding sailors from other classes. The battle for supremacy will be both fierce and fascinating.