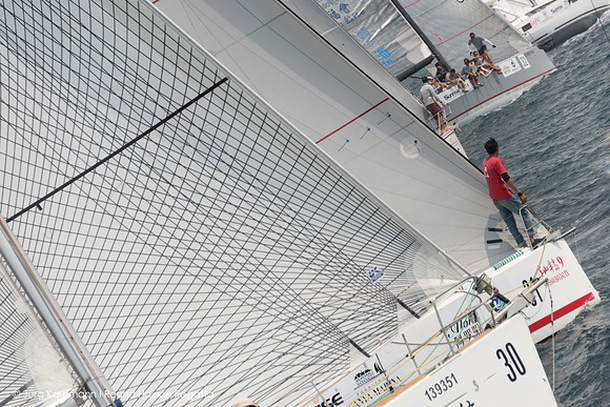 Two more races for the IRC 3/4/5 and three for the Faerst18 one-designs to celebrate is style the conclusion of the 2015 Round Hainan regatta inshore section that crowned the 2015 champions. After having left Sanya yesterday, the big boats from IRC 1&2 covered most of the 300nm to Haikou. The overall leader is still the Swan 82 UBox with the two HNR Dubois50s Lingshui and Sanya trying to close on in and the 40 foooter Seawolf in fourth overall. The leaders are sailing at good speed towards the finish that they are expected to reach around midnight local time.

The final day of the Aloha Round Hainan regatta inshore series opened under an overcast sky and a very light breeze but the weather conditions quickly improved, and a fresh north-easterly breeze of around 10/12 knots enabled the IRC and Fareast18 classes to wrap up two and three races respectively.

In the IRC 3 class, the Mills 41 Ambush owned by Lin Xiaobin closed the three day long series with a clean score of four wins and a margin of six points on second placed Oceanis 58 ATC and eleven points on Farnova 48 Wanning. “We had a good series, sure our boat is more of a pure racer but despite what the final ranking may suggest the competition was pretty hard, especially with ATC.” Declared Ambush's Italian helm Alberto Carrara. “We were also favoured by the conditions on the race course: good breeze, flat sea and little current. The race area is quite challenging though, loads of work for the tacticians to get the wind shifts right. Our mixed international/Chinese crew worked together very well. We used the inshore races to practice for the incoming offshore to Wanning too. We are looking forward to it and have a clear objective: a win!”

Among the IRC 4 the final overall ranking was decided right at the last race, with First 40CR HNA Sailing Team andFirst 40.7 Hainan Luke tied on points while Grand Soleil 46 Lianchuang finished in third. French female skipper Laurence Nicolas led her full Chinese crew on Banshanbandao, the smallest boat of the whole fleet, to overall victory in class IRC 5 with a nice margin on the two Oceanis 43Hongzhou and Lan Jing. “We are very happy with the result, compared to last year we had a faster boat and we put together a very good team, with some expert sailing instructors I used to work with. We are proud to have beaten much bigger boats.” said Laurence Nicolas. “We are not very experienced offshore sailors but we are ready to go out and do our best, let's hope for another win.” Tomorrow the IRC 3/4/5 fleet will leave for the offshore leg along the Easterly coast of Hainan bound to Wanning.

And finally, in the one-design Fareast 18 class, after seven intense races, the title went to a very special crew composed of six young students from Beijing's TSU primary school and their parents, rotating as crew members on board every day. “The idea of the team was born after the kids had their first sailing courses at the Hainan Luke Academy. We are very happy to have had the opportunity to participate in the RHN regatta.” Said the skipper Ling, who also declared: “What is important is not being a kid or an adult to be part of our crew, but team spirit.” Silver went to Jess Rose and bronze to Black Fox.

While the smaller boats were battling in Sanya Bay, the IRC 1&2 fleet that left yesterday for the first 300nm offshore leg to Haikou, has made excellent progress to the finish, getting the best of the local breezes along the western coast of Hainan Island. Mid-afternoon today, after over 32 hours from the start, the tracking system reported speeds around 7/8 knots for the leaders that have covered almost 80% of the route and are expected to reach the island's capital Haikou around midnight, local time. The pack is led by Swan 82' UBOX followed by the two Dubois50' Linshui and Sanya. Fourth overall is the Archambault 40 Seawolf, showing impressive speed performances for a boat its size.