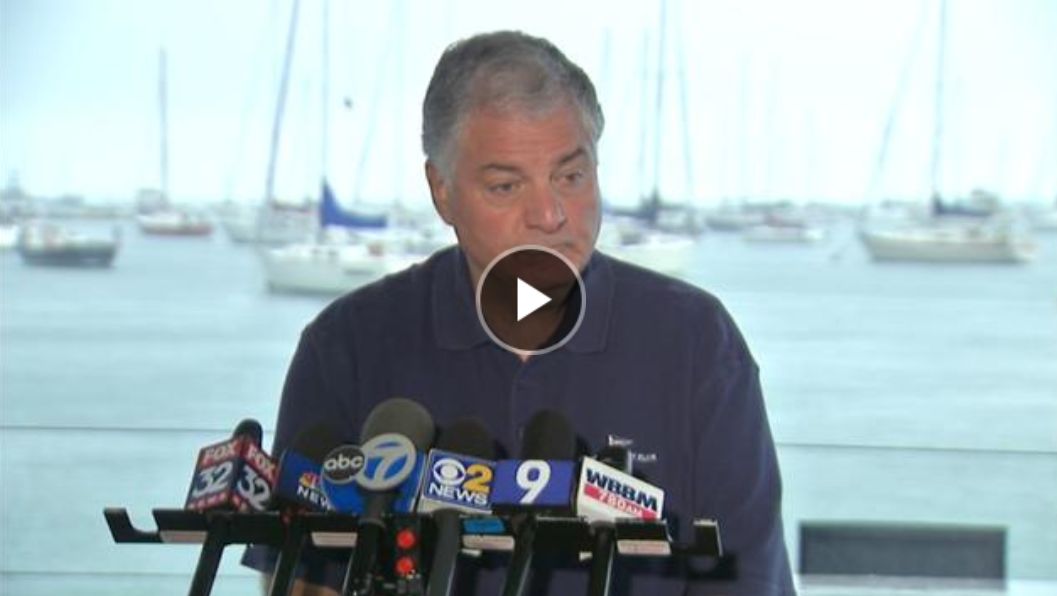 Nick Berberian of the Chicago Yacht Club at a press conference regarding the MOB incident. Source ABC7.

Sunday, July 22, 2018 10:37AM
A sailor who went overboard into Lake Michigan during the Race to Mackinac remains missing and the search has turned into a recovery mission Sunday.

Jon Santarelli, 53, is said to be an experienced sailor. He was on one of the boats participating in the Chicago Yacht Club's Race to Mackinac, a 333 mile race across the lake.

The boat, the Imedi, was roughly four to five miles northeast of Navy Pier when Santarelli fell overboard Saturday.

Nick Berberian of the Chicago Yacht Club said at a press conference Sunday that Santarelli was moving toward the back of the boat to make a routine sail adjustment when a large wave hit the boat, which caused him to slip into the water.

Berberian said that Santarelli has 10 years of experience as a racing sailor and served seven years on the Imedi.

“Jon was a highly respected, highly active, highly enthusiastic and highly passionate member of that sailing community,” he said.

Despite the strong winds and high waves on Lake Michigan, race officials do not believe bad weather led to this accident.

“These sailors are trained,” said Jay Kehoe of the Chicago Yacht Club. “They practice man overboard. They practice sailing in big breeze. The conditions were not extremely challenging.”

The Coast Guard said Santarelli was wearing an inflatable life vest that did not inflate and was last seen swimming towards a flotation device thrown to him.

According to the Chicago Yacht Club, which organizes the annual 333-mile race, the Imedi and its crew of thirteen were in the last wave of sailboats to start.

After seven hours of searching Saturday, the U.S. Coast Guard suspended their rescue efforts when it got too dark. The Chicago Yacht Club said it is now a recovery mission.