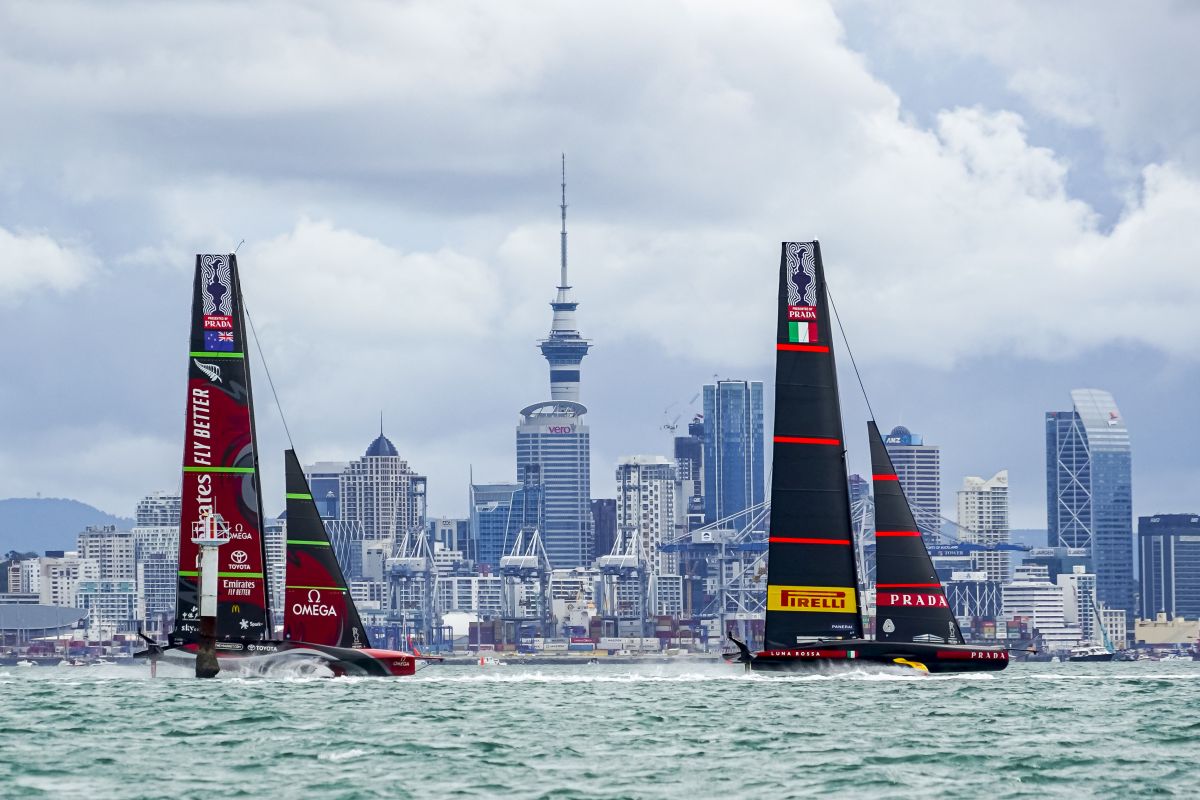 On what could have been the final day of the 36th America’s Cup, the defenders Emirates Team New Zealand won an exciting first race that featured a number of lead changes. It wasn’t until they sailed into a big right-hander at the top of the course on the third beat that they were able to put some distance into the challengers, Luna Rossa Prada Pirelli.

With both teams looking anxiously at the weather, race director Iain Murray made the correct decision to call off the second race, as the wind was going around to the south-west and was not settled enough to get a start away before the 6pm time limit. This means they will do it all again tomorrow, with the Kiwis needing one win to retain the Cup and Luna Rossa needing to win both races to take the event into Thursday. The score is now 6-3 to the Kiwis in the first-to-seven Match.

Emirates Team New Zealand entered cleanly across Luna Rossa Prada Pirelli who took their time to gybe around and head out to the right-hand side of the pre-start zone. The Kiwis were first to get there, gybing around while the Italians tacked before diving back down to the Kiwis.

Plenty of weaving followed as both boats tried to slow down on their approach to the start line. With the greater wind speeds the pre-start zone was feeling smaller.
The start was even, both on starboard but a big big gap between the two as they charged out to the left-hand boundary at 30 knots.

A critical tack was coming – could Luna Rossa get up to the Kiwis and cast dirty air on them? The Italians’ height mode was working as they eventually forced the Kiwis to tack off while they headed for the right-hand lay line for the top gate who had to put in two tacks to get around the top gate plus. As they came together the Kiwis dipped the Italians’ transom to take the right hand mark of Gate 1, while Luna Rossa took the left hand mark, leading by just a second.

As the pair split on the downwind leg the Kiwis seemed to get a better gust of breeze and manged to cross in front of the Italians when they came back together a lead change followed. Now they had swapped sides, gone to the full width of the course and were about to come back at each other for another cross. This time it was the Italians who were in front, another lead change. By the bottom gate a perfectly executed gybe by the Italians protected their position and forced the Kiwis to follow them through Gate 2.

As the second beat continued the battle remained close but by the top at Gate 3 the Italians had protected their lead once again. The same was true of Leg 4 with yet more close racing. At the bottom Luna Rossa LR rounded the right-hand mark of Gate 4 and were 3 seconds ahead as Emirates Team New Zealand took the left-hand mark. The Italians had released their cover on the Kiwis, although they retained the starboard tack advantage. When they came back together Luna Rossa was still ahead.

But the big change came towards the top of Leg 5 when the pair came together once again. Now it was the turn of the Kiwis to come back in on starboard. But Luna Rossa were just ahead as they crossed and tacked in front of the Kiwis forcing the defenders to tack back to the right-hand side of the course. Was this another risk? The Italians would be on port tack when they came back.

But there was trouble in store as the breeze shifted right, benefitting the Kiwis. By the time the pair came back for Gate 5 Team New Zealand had taken the lead, rounding the left-hand mark ahead by 18 seconds.

One leg to the finish with a distance of 400 m between the pair, this was a big distance to make up for the Italians with so little runway left. As Emirates Team New Zealand came into the finish they had taken Race 9 by 29 seconds in the closing stages of the race.

A dramatic and closely fought race to place Emirates Team New Zealand within just one win to take the 36th America’s Cup.