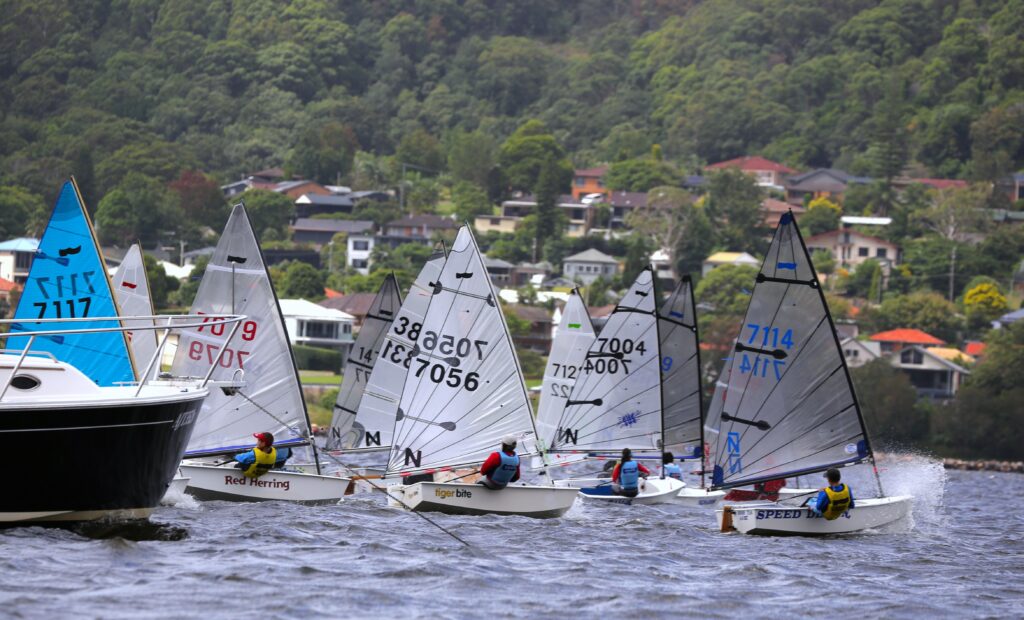 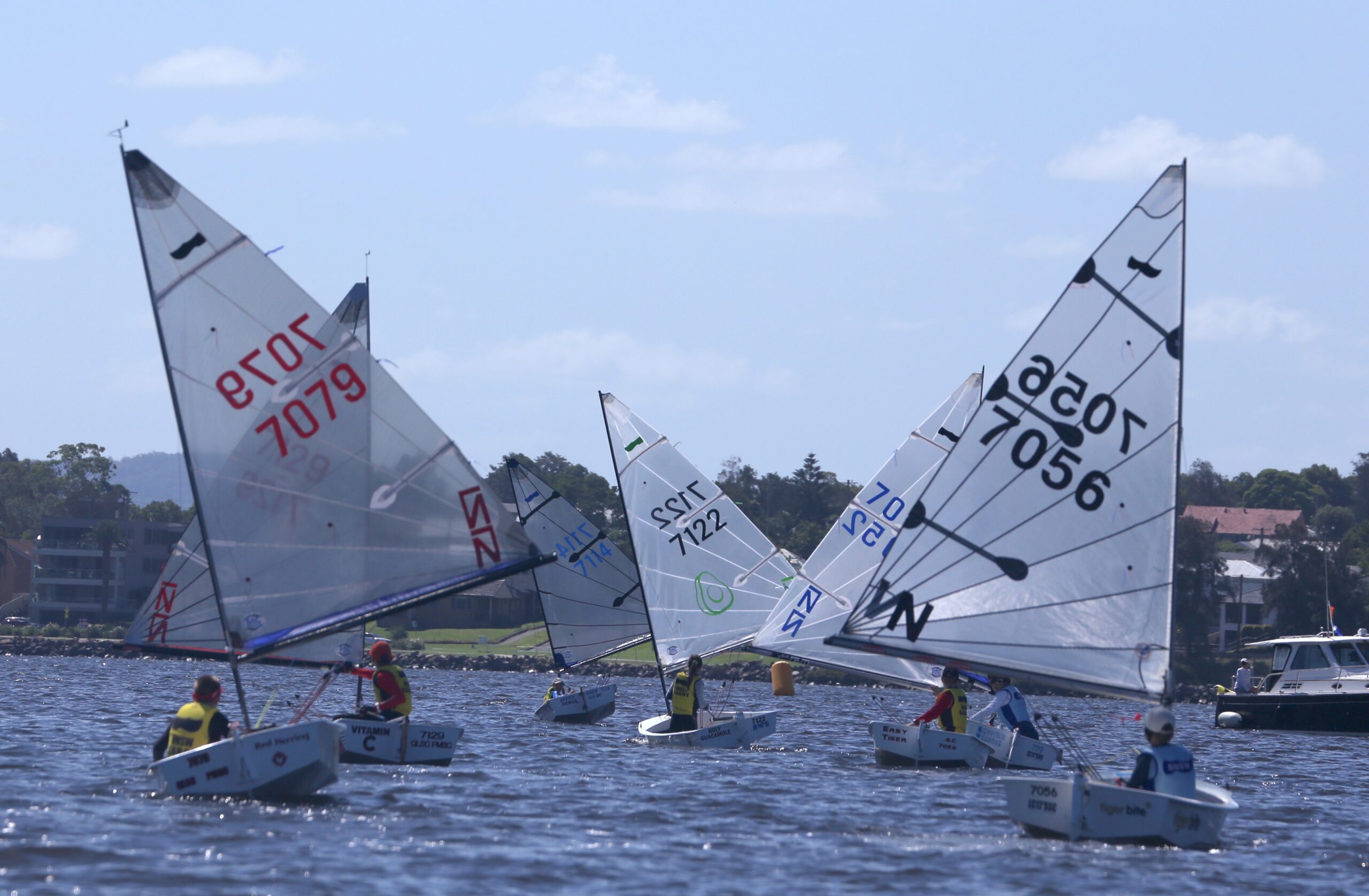 The top seven 1-Up boats in the NSW Sabot Championship. Pic - Sam Gong 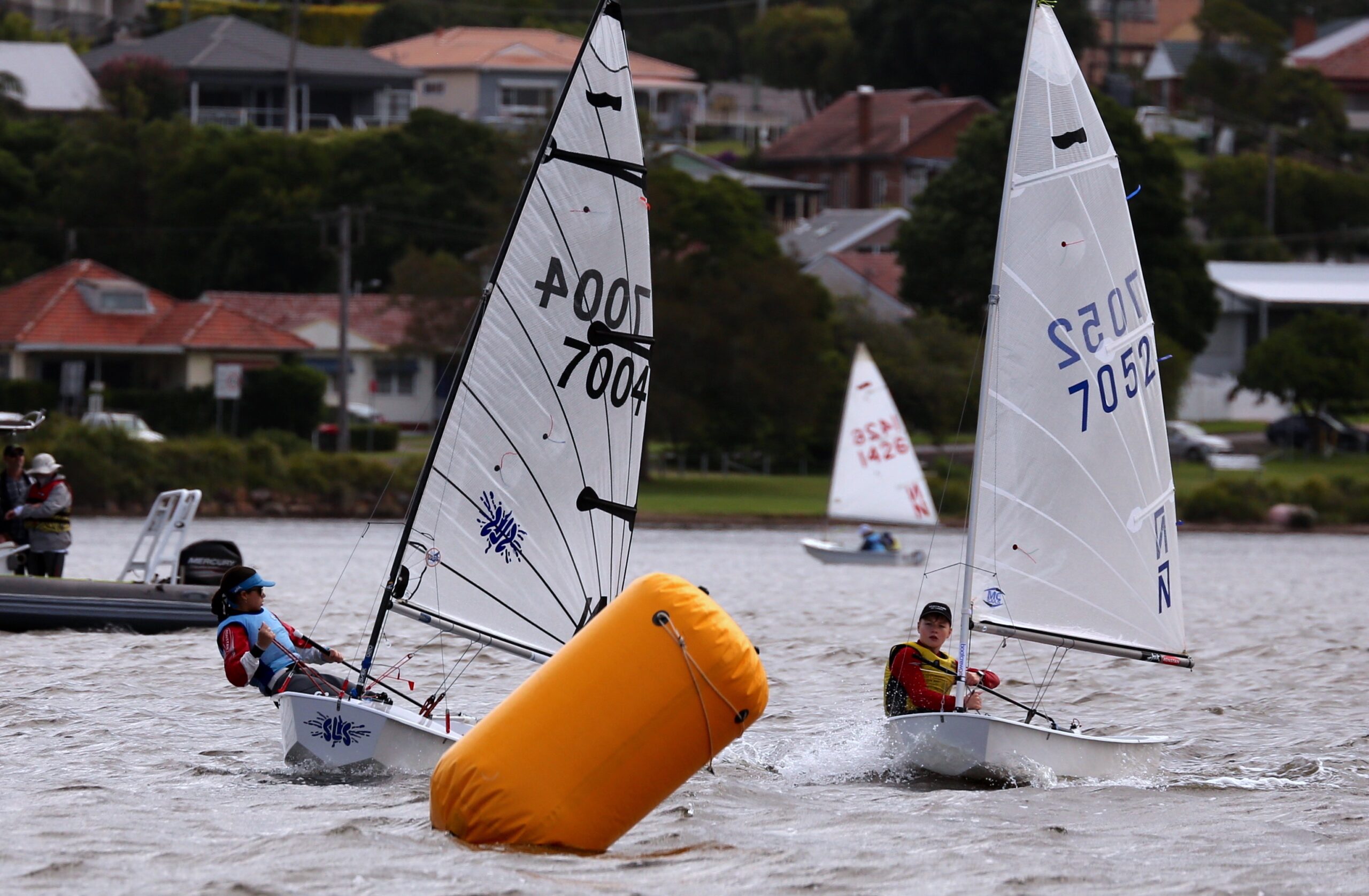 The NSW Sabot Championship concluded over the weekend (March 19-20) with Round 2 being hosted on Lake Macquarie by Teralba Amateur Sailing Club.

The event was sailed over a variety of conditions across both rounds, giving the 43 competing boats lots of opportunities to advance their sailing skills. Round 2 saw some big waves and strong wind on the Saturday, providing the kids with lots of great rides and stories to share on shore.  While sibling rivalry between Marshall and Keisha Day was extremely high in the final results, in true Sabot style, the real winners of the event were the friendships strengthened between competitors and the opportunities for improvement in sailing skills through participation.

The Sabot 2-Up State Title was won by Lane Cove and Drummoyne sailors Luke Mercer and Mary Lou Doolan, in White Pearl, who finished three points in front of Aerial, sailed by his siblings Lily and Harry Mercer. Aerial was leading this division after Round 1, showing how close the racing was between the 2-Up Sabot sailors.

The Spark Sail division had six entrants and was taken out by Meg Ellis, representing Teralba Amateur SC.  The Spark Sail is a slightly smaller sail, a class initiative aimed to provide the opportunity for smaller kids or those new into the class and preferring to sail 1-Up to participate in events.

The future for sabot sailing is looking extremely positive, with half the competitors in the NSW State Titles being 12 years old or younger.  Additionally, it was really pleasing to see three boats travelled to Round 2 from Coffs Harbour Yacht Club, where an emerging NSW regional sabot fleet is gaining momentum.  Finn Savage from Coffs Harbour competed in a Sabot States for the first time and finished 11th in heat 10, evidence that this new fleet has lots of potential going forward.

For the full results, see: http://www.sailingresults.com.au/ScoreItV2/Public/Templates/Default/index.php?event_id=1115

Round 2 of the NSW State Championship was the perfect lead up regatta to the Lake Macquarie City Council Sabot National Championship and Paul Stivano Sabot Week, to be held at Teralba 9-12 April 2022. The upcoming regatta caters for all levels of sailing skill, with kids newer to sailing participating in Sabot Week, while the more experienced sailors will compete for the National title.

Sailors registered to participate in the event are travelling from areas including Townsville, North Queensland and Tasmania.  It is exciting that the 11 registered Tasmanian sabots are representing five different clubs, evidence of the strength of the class in Tasmania.  The vast distances families are travelling to compete confirms that Sabot sailing is serious fun.  There are currently 52 boats registered and counting to compete in the event commencing 9 April (39 National Titles, 11 Sabot Week).

Charter boats are available for the event – see the Notice of Race for details on how to get involved: http://sabot.com.au/australian-sabot-news/