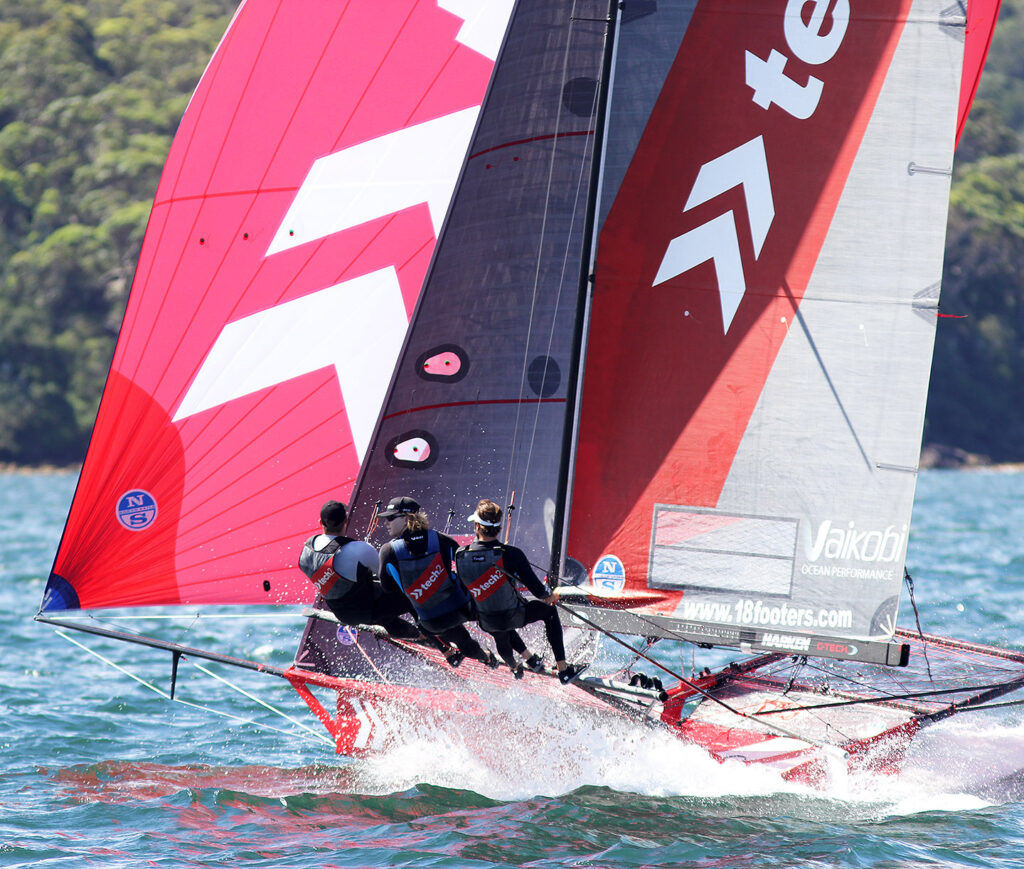 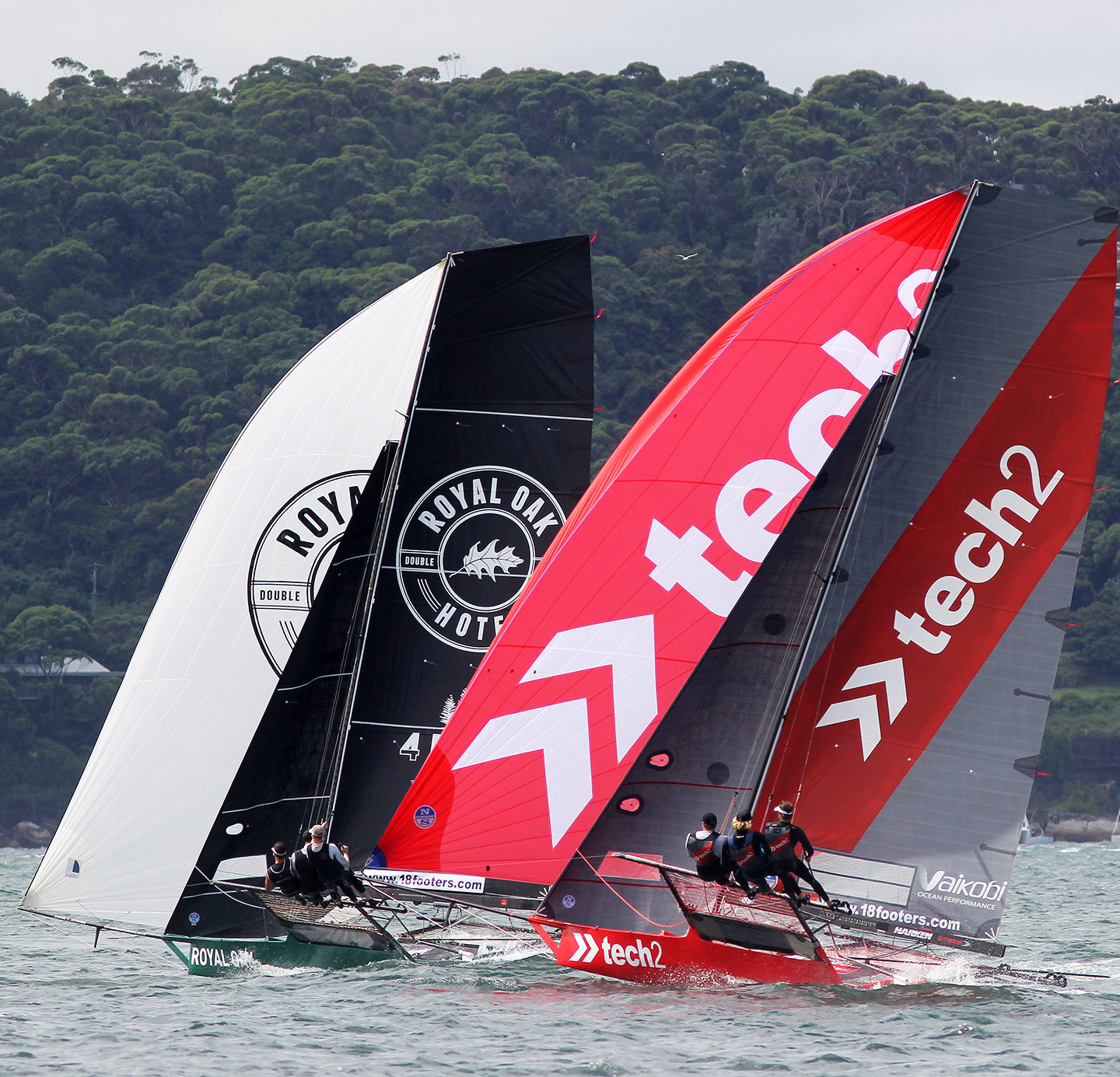 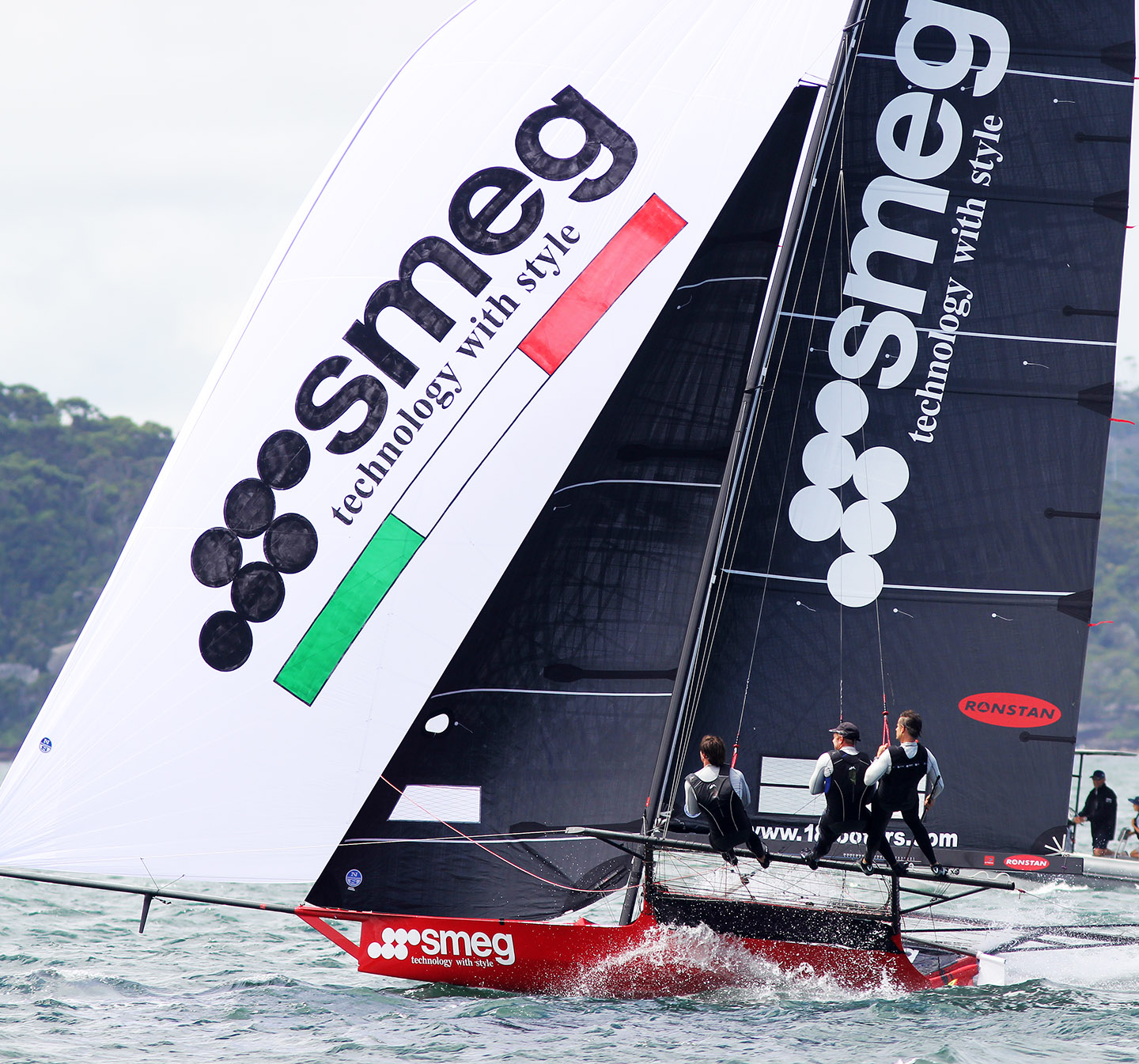 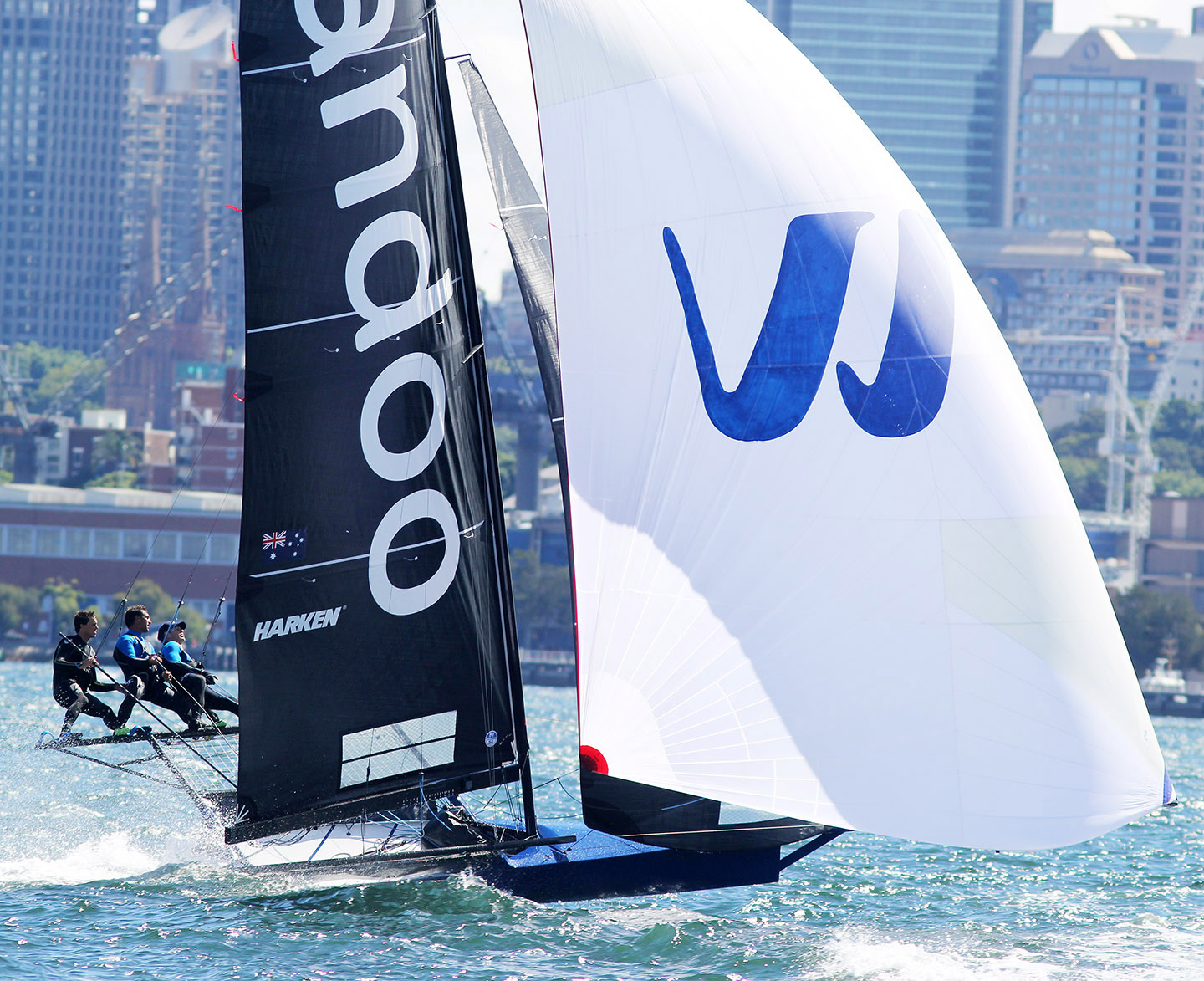 Andoo leads the race on the run to the bottom mark at Robertson Point. Pic - 18ft skiffs 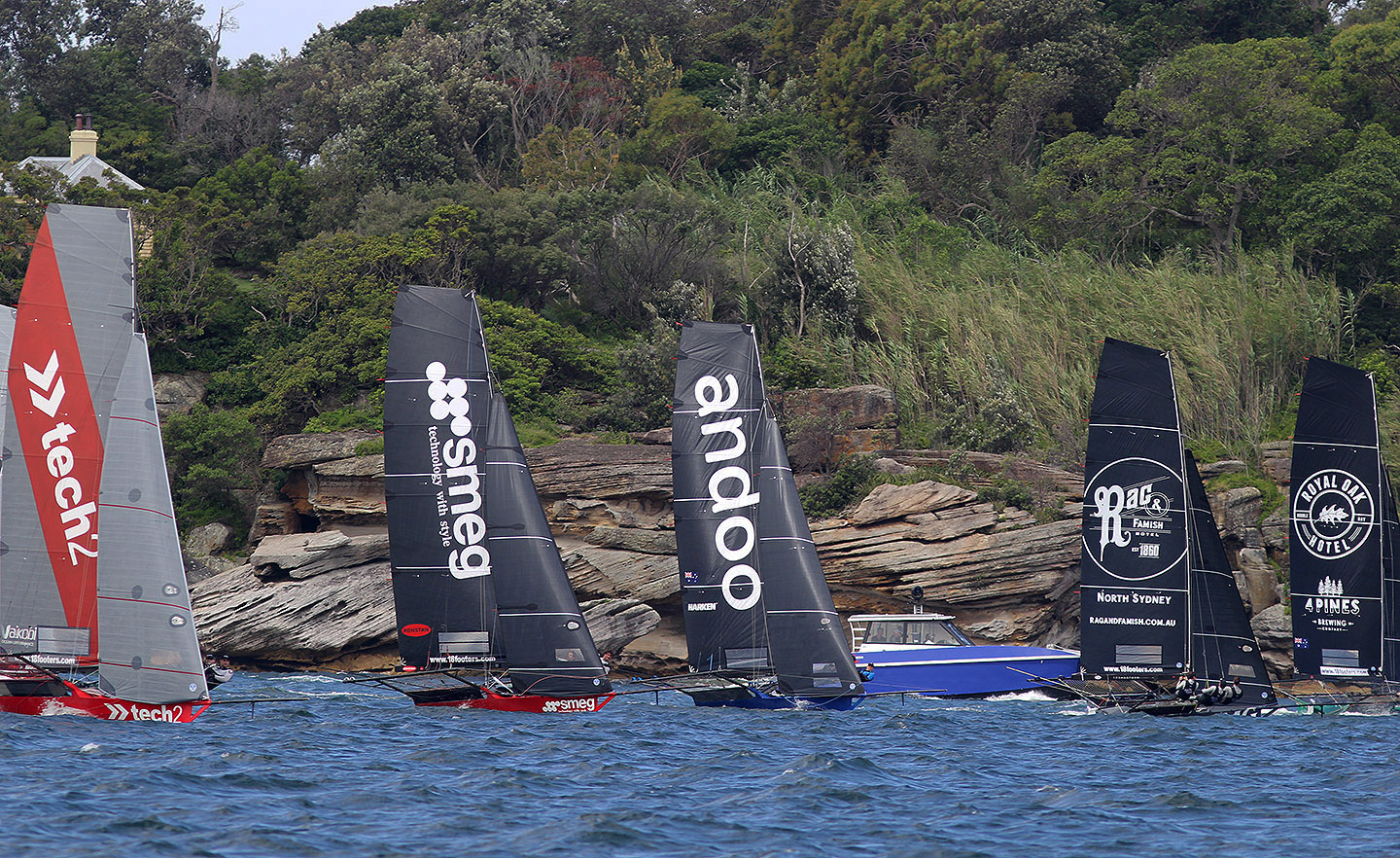 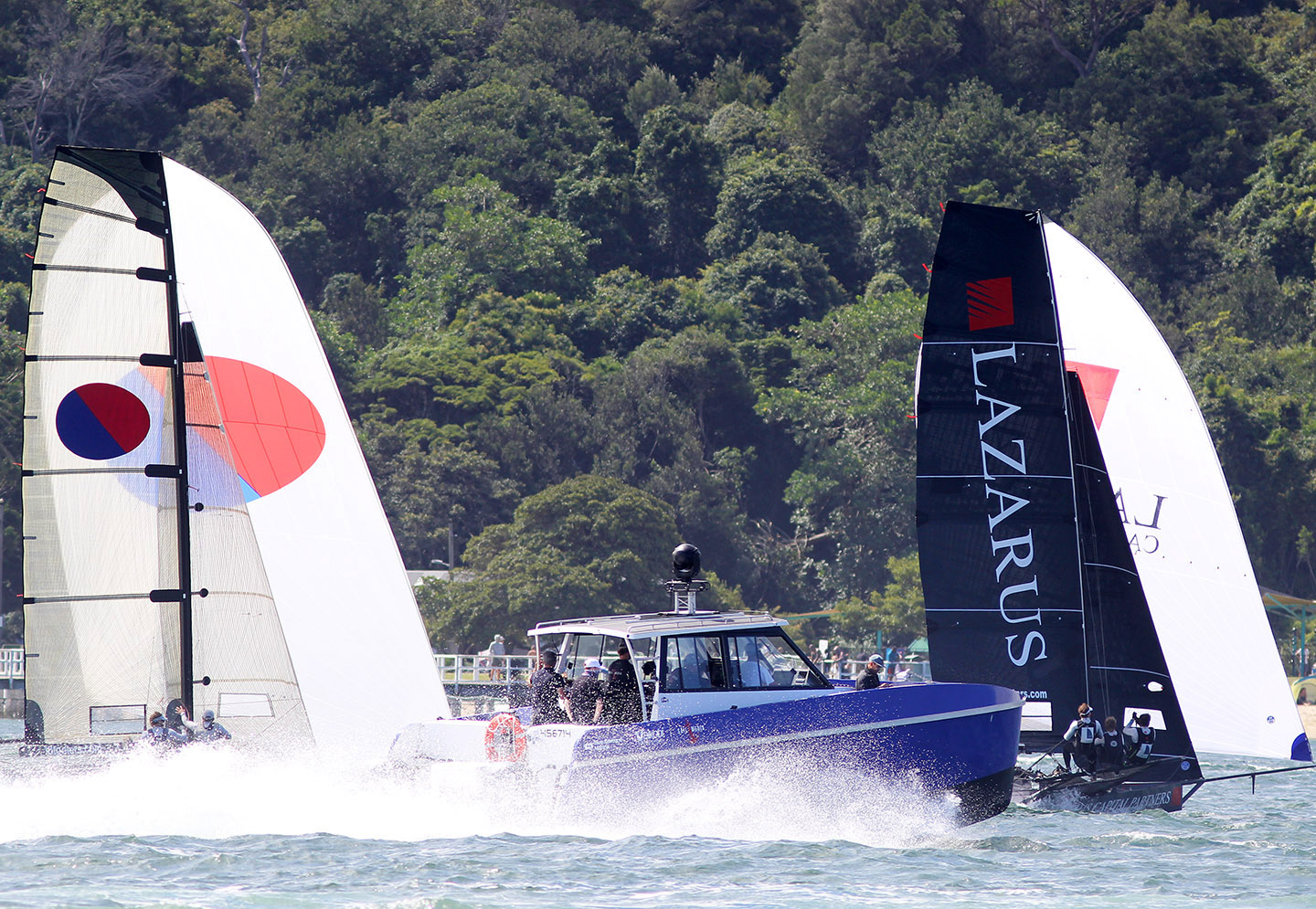 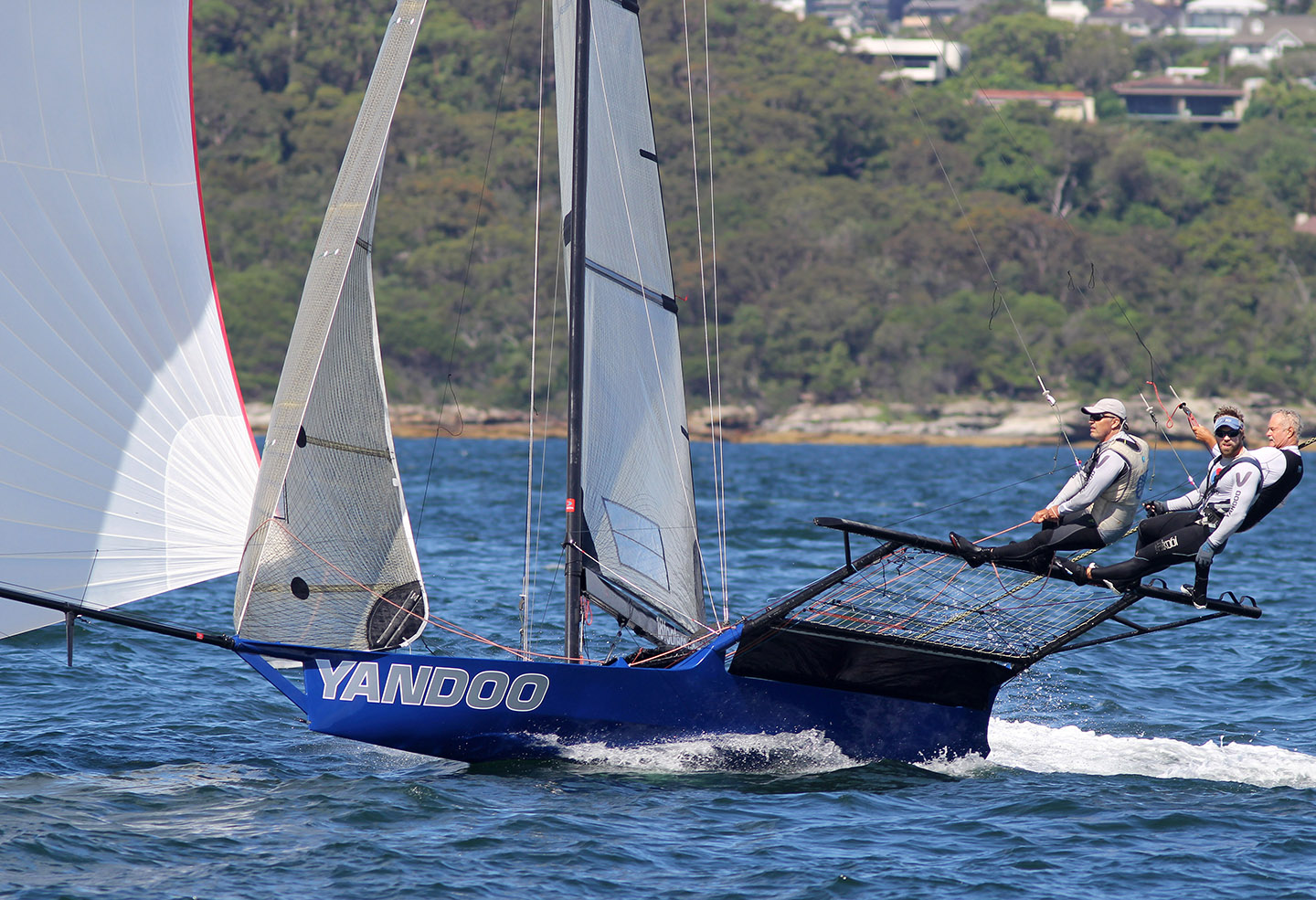 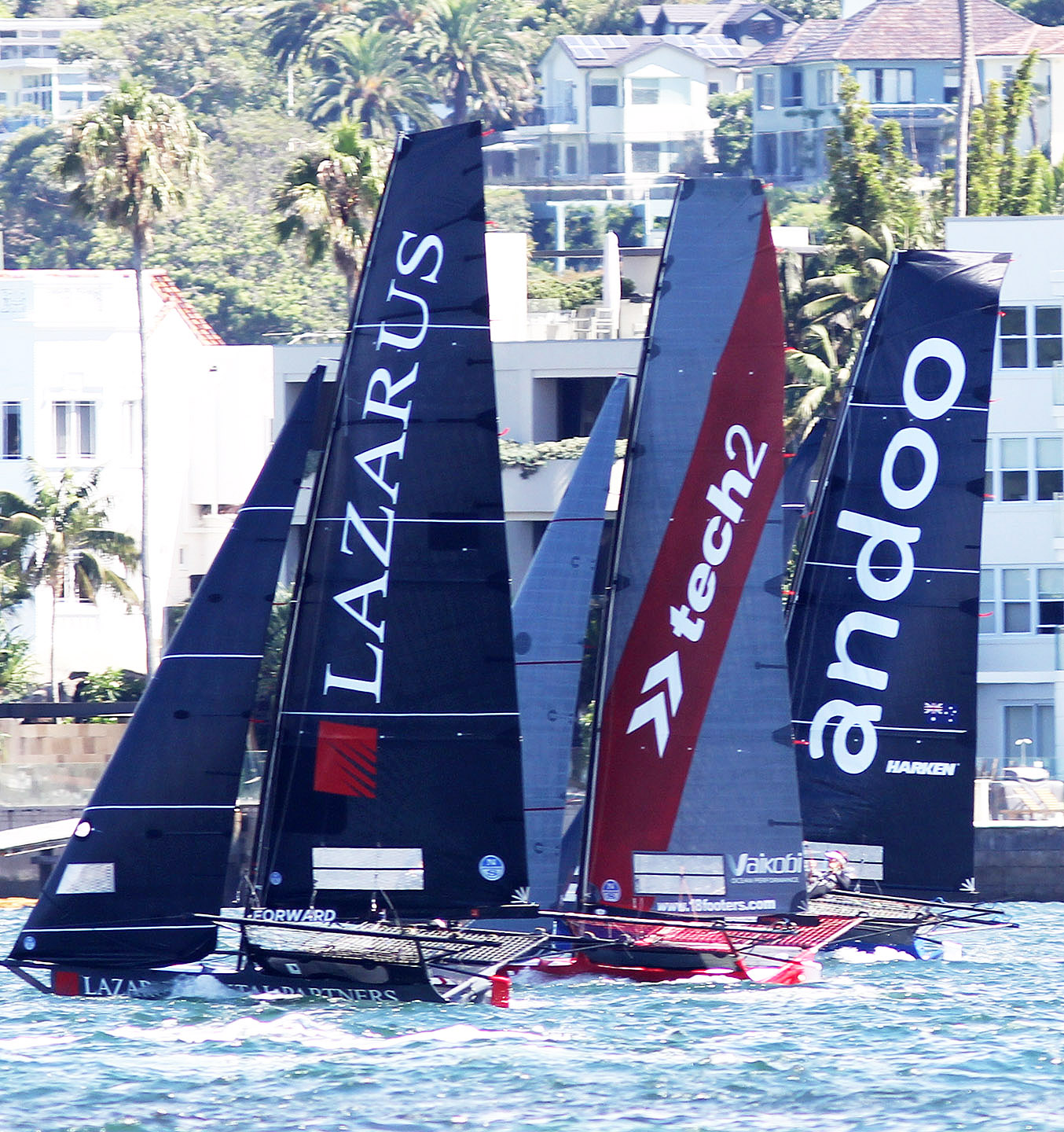 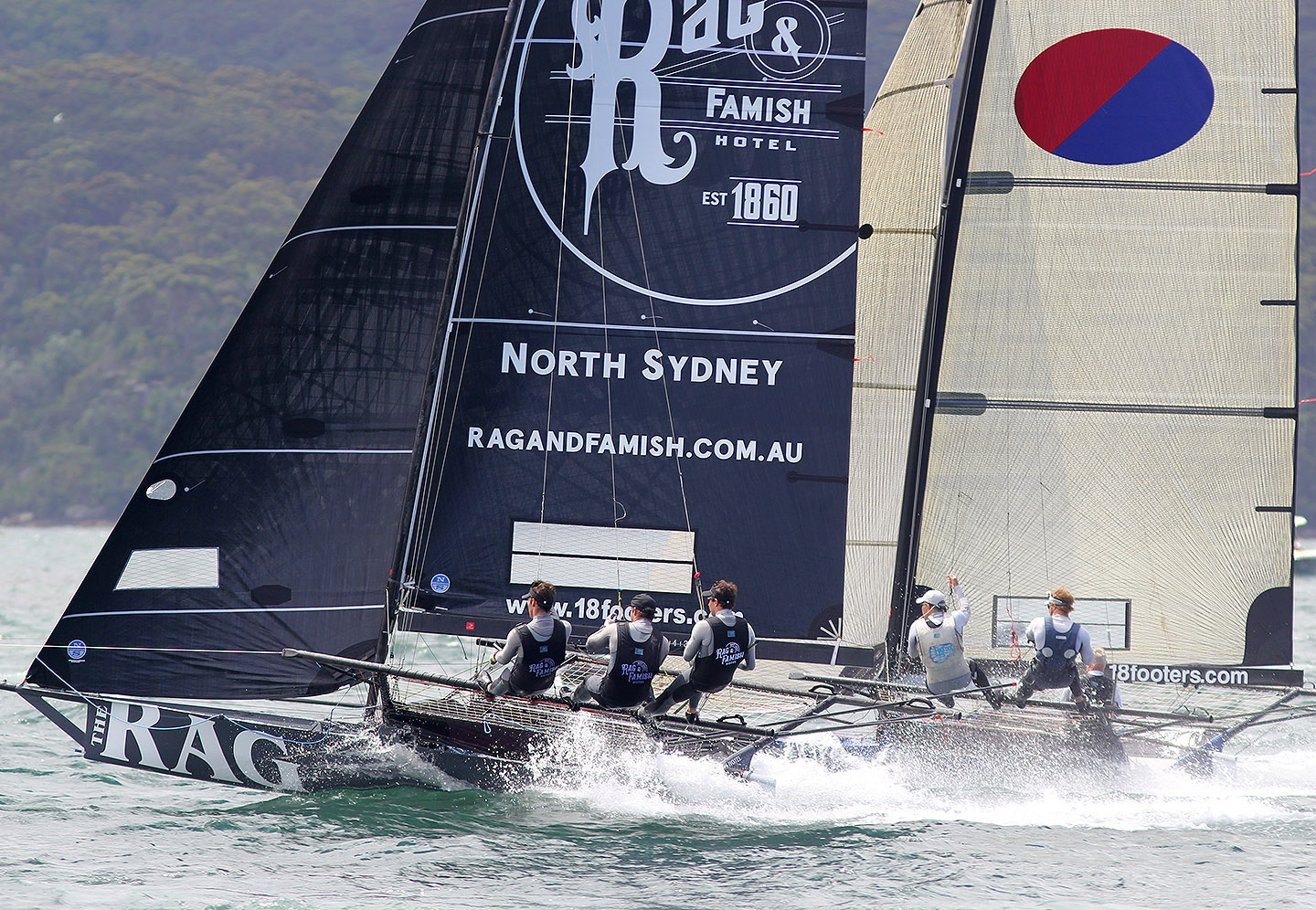 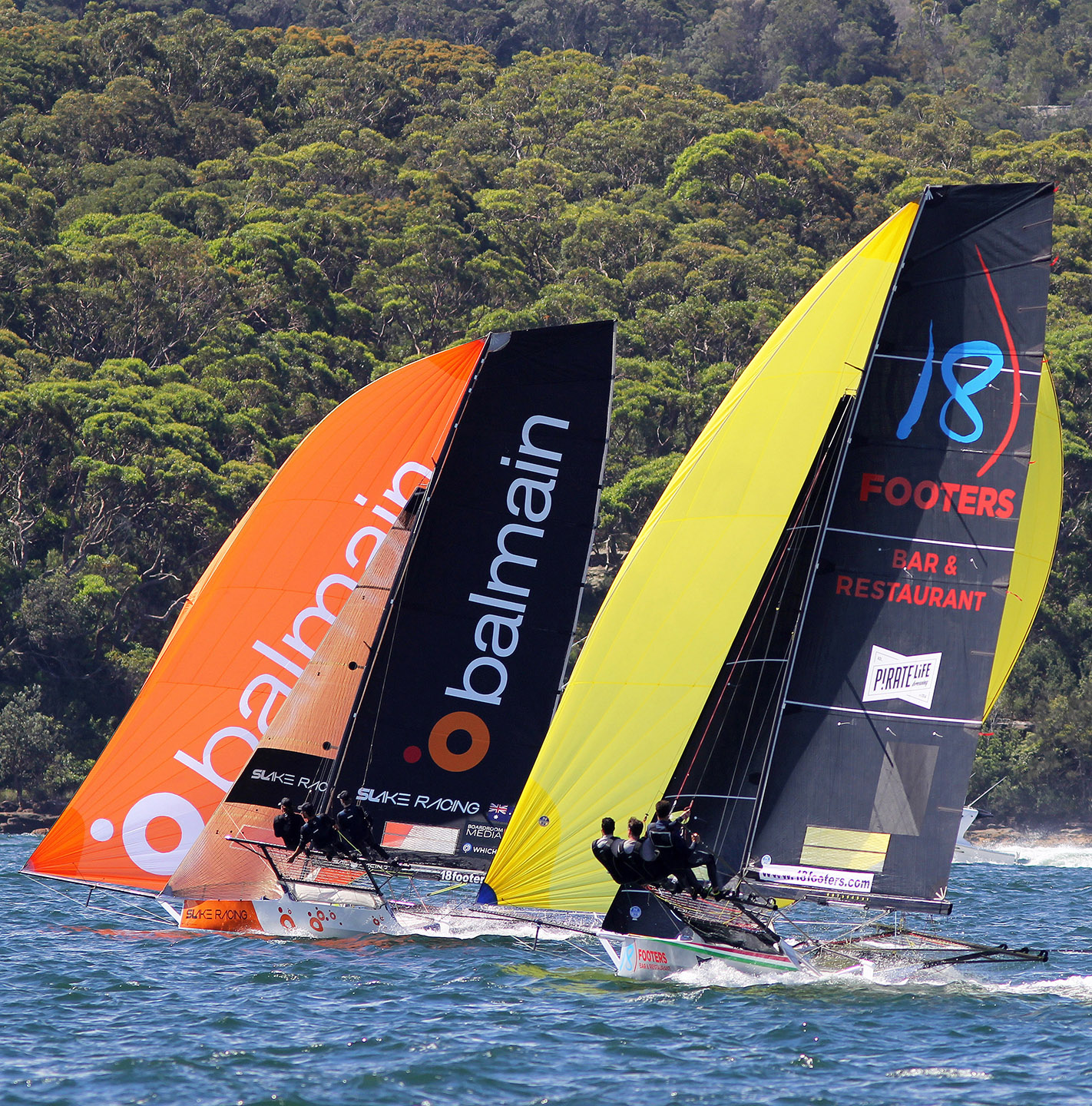 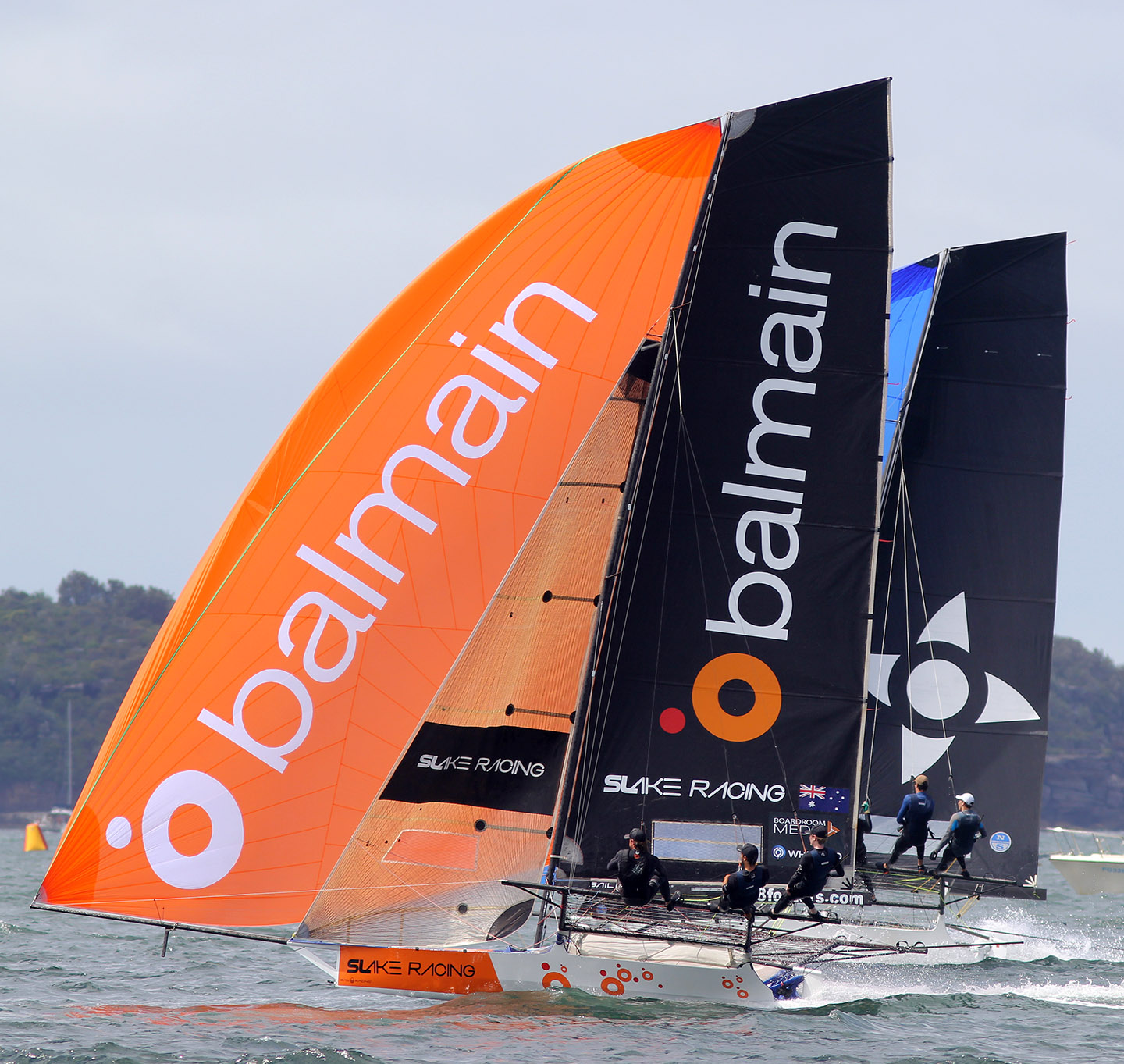 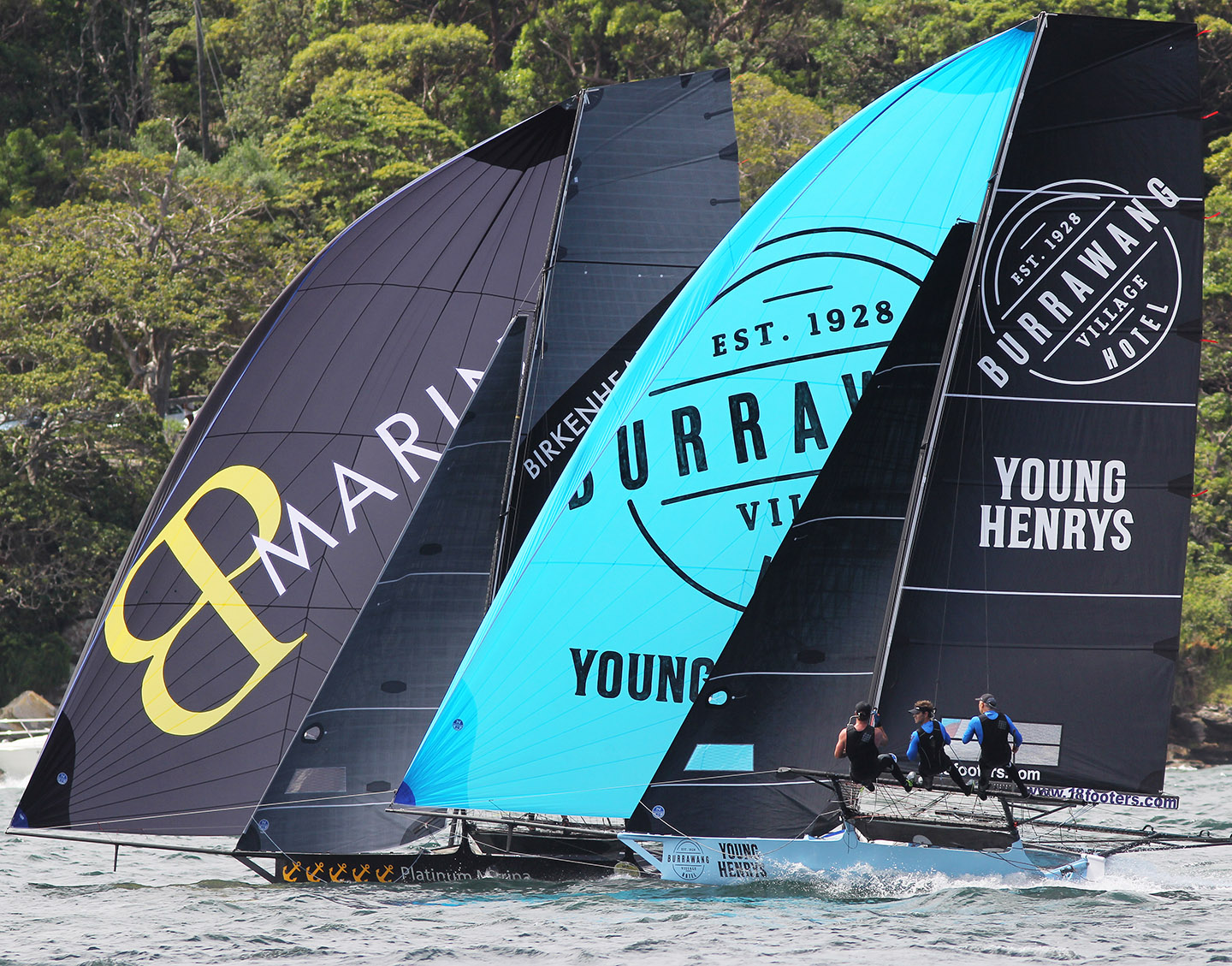 It has set the scene for a match race type finish to the series as only one-point separates Tech2 and Yandoo going into next Sunday’s final race.

Tech2’s team of Jack Macartney, Charlie Wyatt and Lewis Brake had to recover from a slow start, which saw the team back in seventh place at the windward mark in Rose Bay, before going on to take today’s race by 26 seconds from the rookie Rag & Famish Hotel team of Harry Price, Josh McKnight and Harry Hall.

Andoo (David Gilmour, Sam Newton and Matt Stenta) led for much of the course before fading over the final leg to finish third, three seconds behind Rag & Famish Hotel.

Tech2 and Yandoo had been level on 10 points (net) after last Sunday’s Race 6, but Tech2 was this week given a four points penalty for a sails infringement earlier in the championship.

The present (net) point scores going into next Sunday’s final race of the NSW Championship have Yandoo on 14 points, followed by Tech2 on 15, Noakesailing (Sean Langman) on 28, Rag & Famish Hotel on 30, Shaw and Partners Financial Services (Steve Thomas) on 34 and Fisher & Paykel (Jordan Girdis) on 37.

For the first time since early in the season, the fleet was able to use the big #1 rigs in the SSE breeze and the result was a great race with often only secs separating the leading three or four teams around the course.

John Winning’s team elected to sail the first windward leg, from the start in Taylors Bay to Rose Bay, on the western side of Shark Island and grabbed a narrow lead from Rag & Famish Hotel when spinnakers were set for the long downwind leg to the bottom mark off Robertson Point, on the opposite side of the harbour.

Lazarus Capital Partners was in third place, having also sailed to the west of Shark Island, followed by The Oak Double Bay-4 Pines (Aron Everett), Andoo, Smeg and Tech2 in seventh place.

The young team in The Rag grabbed the lead from the more experienced 18 footer teams at Robertson Point. Lazarus Capital Partners had moved up into second place with Andoo next and looking dangerous.

On the following windward leg to Clark Island, Andoo and Tech2 made significant gains on the RHS of the course and Andoo was the new leader from Tech2 with Rag & Famish Hotel relegated back to third place ahead of Lazarus Capital Partners and Yandoo.

The leading positions remained unchanged on the run into Chowder Bay but the next windward leg across the harbour back to Rose Bay saw the lead change on two occasions.  Tech2 narrowly crossed Andoo west of Shark Island but Andoo recaptured the lead on the next tack just minutes later.

Rag & Famish Hotel and Lazarus Capital Partners were also near the two leaders and the four teams were putting on a great race for the big spectator fleet.

Andoo finally went around the Rose Bay mark with a 12 seconds advantage over Tech2  and the pair set about a close battle on the loop across the harbour to Taylors Bay and back to Rose Bay where Andoo’s margin had been reduced to just five seconds.

Andoo, Tech2 and Rag & Famish Hotel were separated by only 10-15 seconds for the next long spinnaker run to Robertson Point  which forced all three teams to set their spinnaker soon after rounding the Rose Bay mark.

The SSE wind was putting even more pressure on the teams as they battled to clear Bradleys Head and this is where the race was ultimately won as Tech2 managed to drop its spinnaker marginally quicker than Andoo and took the lead as the fleet headed for the finish line off Clark Island.

The Rag team’s performance was so good it earned it the Ferry Patrons Trophy handicap section of the race and has moved it into third place overall in the League’s Season Point Score.

Today’s result sheet, progress points table, and images from the racing are attached.

Race 8 (last race) of the NSW Championship will be sailed next Sunday.

Spectators can follow the race on board the club’s spectator ferry, however due to the COVID-19 policy, numbers are limited.  Booking online through the club’s website http://www.18footers.com.au/18-footers-sailing/spectator-ferry/ is essential.