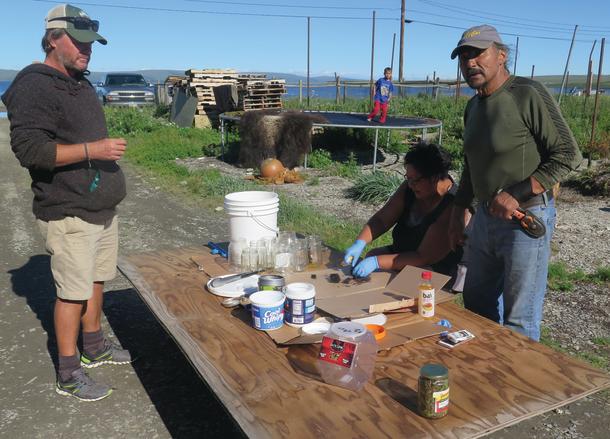 After finishing her 2016-17-summer contract with the Australian Antarctic Division, former multihull ocean racing sailor and cofounder of the Australian Wooden Boat Festival, Cathy Hawkins, sailed monohull, Abel Tasman, 4,427 nautical mile from Australia to Kushiro, Japan. From July she clocked-up another 7,155nm on board Abel Tasman from Dutch Harbour in the Pacific Ocean’s Aleutian Islands, through the Arctic Ocean’s notorious Northwest Passage to the Atlantic Ocean and onto Greenland and Norway.

This is her second story in her Northwest Passage series.

First impressions ambushed my initial judgment of Nome and its inhabitants; it was like stepping into ‘Mad Max-ville’ both on and off the water. Or, as my fellow crew Dave described: “beyond Thundernome”. It had a ramshackle post-WWII feel about it and held a premonition of what is to come when the world goes off the ‘deep end’.

First impressions, however, can be impulsive, more on that later.

Gadgeted together and overloaded with contraptions, a fleet of dubiously seaworthy gold mining barges dominate Nome’s snug harbour in western Alaska. Rusting generators and engines sit precariously close to gunnels and are enwrapped with ‘sucker-upper’ hoses that snake haphazardly on decks waiting to be deployed to the bottom of a stirred up coastline to lift nugget rich sand into rough-running sieving sluices.

It is head-scratching stuff for someone like me without an engineering bone in her body, but here goes: divers go over the side on -30 degree icy winter days and walk on the bottom vacuuming up sand with the thoroughness of a house-proud 1950s housewife. They are soft really, the prospectors not the housewives, because saltwater runs through a deck heat exchange, down a tube to fill their wet suits with hot water to keep them warm. Beats the old wee-wee in the wetsuit trick I guess!

The gold barges are conceived in all shapes and sizes and Abel Tasman was alongside a hulking one that sported an excavator appendage instead of a ‘sucker-upper’ hose.

There have been generations of prospectors hallucinating weird and wonderful modifications and enhancements to perfect their barges. Dozens of decomposing bungled prototypes lie abandoned around town. It is an infectious pursuit and eccentric, optimistic prospectors are an addictive breed as they doggedly pursue their passion until it breaks them. If they get it right, however, there is certainly more than a living to be made … maybe.

The reality TV show, Gold Hunters of the Bering Sea, has aggravated intergenerational prospectors who are solidly at the top end of the gold-finding chain. “We get all sorts of ‘blow-in’ duffers trying to make a quick buck after watching the bloody show. See that barge with a bus on it. Four guys from the Yukon brought that thing across Norton Sound. Scared themselves witless, got off and we haven’t seen them since,” said Geoff disparagingly.

Heading northwest, north and north east, like the radiating bones on the back of your hand, there are three dead-end roads that lead out of Nome and are advertised as needing a day to explore. Our journey down the first road taught us that the landscapes and lives beyond were worthy of more than one-day’s fleeting visit.

Layer-upon-layer of barren-topped Alaskan mountain ranges peak and descend into green gullies, canyons and a network of twisting salmon filled rivers and creeks that interconnect and race to the sea.

Not a plant is out of place and there is not a weed in sight, everything has evolved to survive the brutal climate. Summer vegetation is filled with bush tucker: salmon berries that explode sweet apricot essence into your mouth, tart blueberries on prostrate plants and there’s an abundance of leafy greens for salads or, when soaked in seal oil, preserved as winter vegetables; as done by the Eskimos, it is OK to call them that. A land of plenty for the multitude of birds, moose, bears, musk ox, Caribou and reindeer who roam the landscape.

At the end of the Teller Highway, a dusty dirt road undulating through the foothills of the Kigluaik Mountains, is an Inuit tribe fishing the waters of Port Clarence, Grandey Harbour and the Imuruk Salt Basin. Idly driving through the town we found a rusting ‘aboriginal bush mechanics’ spare part heaven of sledges, engines, vehicle bodies and pumps.

A quick walk to the end of the spit, chuck a ‘u-eey’ and we could have been out of there But not so. What transpired was remarkable in its minimalism and I will carry every moment of this visit onwards.

Eskimo Joe was hauling in his shore strung ‘grab-all’ net bearing 40 odd large pink salmon after about a four hour wait. It was food for his 25 huskies and a half-wolf who were burning energy big time during their summer moult.

He stewed the fish in a 44 gallon drum with a hobbled together heating source to feed and hydrate the hungry pack of dogs. The ever-watchful huskies would jump to Joe’s terse instructions but not the wolf “he’s here for shagging and takes no notice of me,” said Joe.

In the winter, Joe hunts moose on the tundra with dogs and sledge. One moose will feed his family for 12 months. He has competed in 20 Iditarod dogsled races but does not want to do them anymore because the course is “graded like a driveway” and there is too much mushing and vet support. “They’ve made it too easy, soft and safe. The challenge has gone,” he frowned.

We passed a few hours with Joe and Mary and their bypassing kids and grandkids. Every plant around their home was eaten and preserved; Mary cut whale blubber, seal intestines and meat into bite-sized chunks with an Ulu and bottled them in seal oil for the winter.

I tried everything and it was palatable except for the whale blubber that I can only describe as slimy chunder. Salmon was drying on racks on the foreshore, ready to be preserved. Their grandson was bouncing on a trampoline and belly flopping into a musk ox pelt.

The Inuits of Nome and Teller may not appear to be house-proud surrounded by rusting abandoned machinery, but they do have a revered and coveted sense of home and family and the children are endearingly respectful and polite.

I spent some time on the shore skipping flat smooth stones on the water with cousins Franklin (eight years old) and Galen (10). “We miss winter,” they told me, “we like sliding down the snowy hills, throwing snowballs and cracking ice on the water’s edge”.

Inuit psyches are geared that way, the same as we crave the end of winter’s short days and look forward to sun and surf. It is just a matter of how you arrange your mind and what’s ‘normal’. In this case it is blizzards, ice, snow, -30° dark days. It is absorbed into their being from the day they are born.

Clara, Marilyn (10) and Melissa (12), an Inuit mum and her two daughters, were at the other end of the crescent-shaped beach. They had moulded a hole in the grey sand and started a fire to cook a slab of salmon under the coals.

Everyone gravitated to the fire towards the close of the endlessly-bright day. Marilyn finished fashioning her sandcastle of Abel Tasman complete with a schooner rig. Melissa casted and spooled her rod in and out of the water. In their unhurried, annunciated way they asked contemplated questions about our passage, the boat and our lives.

Long pauses between questions and answers hung in the cloudless sky as we processed the contrasts of our cultures and how much we could learn from them. A placid scene of empathy between contented natives and transitory travellers who simply took the time to sit quietly together in rare warm sunshine.

When it was time to depart we were ceremoniously gifted with a bag of smoked and dried salmon and a five kilo fresh salmon!

The next day’s drive took us to Pilgrim Springs. Snaking along the mountain road we fantasised about the spring, surrounded by snow-capped mountains, a waterfall of hot water avalanching into a crystal clear pool bordered with lichen covered rocks and caribou, moose, musk ox and bears grazing in the distance.

Better still, we found a more authentic scruffy Alaskan experience: a half-finished, in need of maintenance, muddy hole in the open wind-scoured tundra. A hole filled with warm water, running hot from a floppy old agricultural pipe wedged between a bundle of boulders so it pointed in the right direction. We had not had a wash since leaving Dutch Harbour in the Aleutian Islands, so it was Alaskan perfection to us.

With a bath under our belts we were ready to tackle the Arctic Ocean’s notorious Northwest Passage from west to east. No two years are the same and nothing is ‘normal’ in the Northwest Passage so off we go into a frozen quandary. ≈