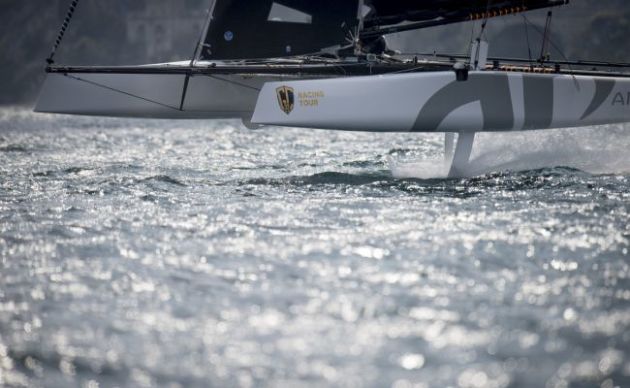 Franck Cammas steered NORAUTO to the top of the leaderboard after six high-speed races at the GC32 Riva Cup today, the first event of the GC32 Racing Tour 2016. The French offshore racing legend managed to squeak past Team Tilt after the Swiss team suffered from some gear breakdowns.

Sebastien Schneiter and Team Tilt took scores of 1,1,2,1 in the first four races, although when their cunningham system broke they were unable to sail the boat at full pelt on the reaches. The Swiss finished 5th in the next, and was on course for another victory in the final race of the day. But then their mainsheet strop snapped and Team Tilt slipped to 3rd while the crew hurried to repair the broken rope as quickly as possible. This allowed NORAUTO to win the final race of the day and take the top of the leaderboard.

Team Tilt is just two points behind. The mainsheet trimmer is Australian Olympic medallist Glenn Ashby. “Awesome racing today, six races maybe a bit much for us old boys,” he said. “We were pleased with how we were going, Arnaud [Psarofaghis] was steering the boat really well. Had a bit of gear failure but, all things considered, still a really nice day out on the water.”

Gunvor Sailing was also having a good day with helmsman Nathan Outteridge getting the best of the hectic reaching starts, even if the crew weren’t quite as fast around the track as the French or Swiss. But when skipper Gustav Petterson fell overboard in Race 4 during a high-speed turn at the leeward mark, the Swedes dropped back to 7th while they waited for an umpire boat to put Petterson back on board. The Swedes now sit in 3rd overall just 2 points in front of Flavio Marazzi and ARMIN STROM. “We had a 3rd in the first race,” said Marazzi, “but then we struggled to repeat that level for the rest of the day. We’re a pretty new team sailing together so we’ll start working out how to get things better throughout the week.”

A 2nd place in the last race of the day lifted Seb Rogues and Team ENGIE to 5th overall, 3 points ahead of Argo skippered by American owner Jason Carroll. Moth sailor Anthony Kotoun is crewing for Carroll and said the key to improving performance was improving crew communication. “Only trouble is, sometimes you can’t hear a thing over the screaming of the foils,” he said. “When the boat’s really going fast you can shout as loud as you like but probably no one’s going to hear you!”

There is a race within a race between the three Owner-Drivers at the GC32 Riva Cup. Currently winning the battle for the Owner-Driver Trophy is Pierre Casiraghi steering Malizia – Yacht Club de Monaco. Argo is just 1 point behind the Monaco team, with Orange Racing in 3rd place and 9th in the overall standings. Casiraghi was still shaking his head at what an exhilarating day’s racing he’d just experienced. “That was crazy, amazing, so many close situations, a great finish with ARMIN STROM where they only just beat us by a couple of metres.”

In race 3 Malizia was lying in 2nd at the bottom of the course, looking good for their first top 3 finish. “I told Boris [Herrmann] to go forwards to help trim the boat,” said Casiraghi. “Suddenly, I don’t know why, the boat dropped off the foils and Boris didn’t have time to grab something, so over the side he went.” This dropped the Monaco crew back to 8th in that race, but they have at least had a glimpse of the front of the fleet. The learning curve for all these teams is very steep, and will remain so for some time to come. Today Lake Garda delivered exactly the conditions that the nine teams competing on the GC32 Racing Tour wanted. Friday’s forecast offers the prospect of more high-octane action.