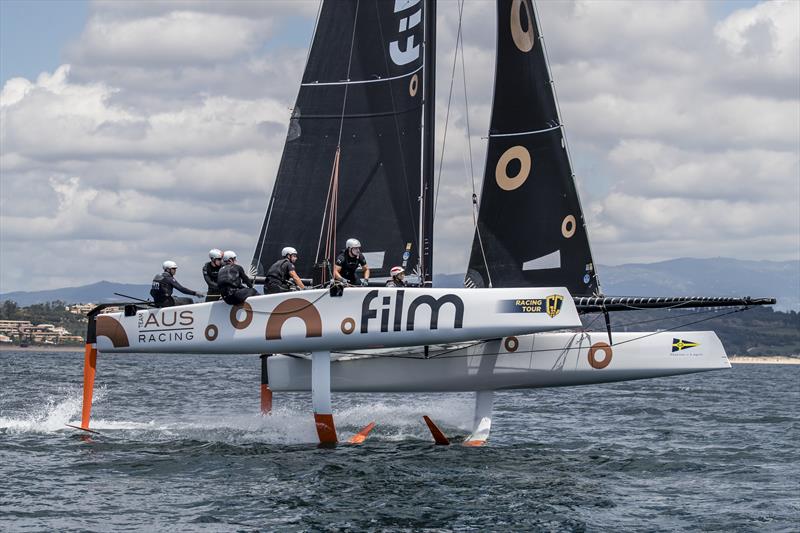 Franck Cammas’ Norauto powered by Team France continues to hold a comfortable lead at the end of the penultimate day of racing off Portugal’s Algarve coast at the GC32 Lagos Cup, second event of the 2018 GC32 Racing Tour.

It was a day of two halves with some patient waiting for the wind to settle in both direction and pressure. Principal Race Officer Stuart Childerley initially held two races with conventional windward starts further out into the middle of the Bay of Lagos. For the first time this week, in the south-west wind, the boats experienced waves.

Childerley then moved the start line up the course towards Lagos’ famous tourist attraction – Ponta da Piedade with its grottos and reddy-golden cliffs – where two further races were held with high octane reaching starts in slightly stronger 14 knot winds.

There were some new teams venturing towards the upper end of the leaderboard today. Simon Delzoppo’s .film Racing prevailing in today’s second race.

The GC32 Racing Tour’s Australian owner-driver is sailing with a new team this year, including former America’s Cup skipper and GC32 veteran, Sebastien Col, as tactician and an experienced crew including Britain’s Adam Piggott, recent winner of one of the world’s leading dinghy catamaran events, Round Texel.

“We got a decent start, tacked away pretty early and just focused on smooth sailing, good boat speed and positioning, got into the front and then held it,” recounted Delzoppo, who is also GC32 International Class President. “We led from start to finish although we covered the fleet a little bit. Towards the end I said to myself ‘just keep calm and enjoy it’.”

Unfortunately .film Racing followed this with two deeper results to lie in sixth place overall, however the boats mid-leaderboard are tightly bunch with the Aussie team just eight points off the bottom step of the podium.

Also on the ascent today was Switzerland’s Realteam, skippered by Jerome Clerc. In the final race, the 2017 GC32 Racing Tour champions got off to an excellent start to lead around the top mark. Clerc admitted that they then dropped the ball with a bad gennaker manoeuvre and overstood on one layline: “The fleet is so tight you can’t make mistakes.”

In an ultra-close finish they were rolled coming into the final mark upwind by Zoulou, rounding overlapped with Jason Carroll’s Argo to come home third. However they were second highest scoring boat of the day, which has elevated the Swiss team to third overall.

“It is just about crew work,” said Clerc. “We are getting better and better. We managed to have good communication and we found the solution to work together. But we have plenty to improve. Zoulou and Norauto are really good. It will be hard to catch them.”

While Norauto is still out in front with a 10 point lead going into the final day having added two more bullets to her collection of six (from races 1 and 3 today), Zoulou, lying second overall, was top scoring boat today, having relieved Realteam of the win in the ultra-tight finale to the last race.

Owner-driver Erik Maris explained their motivation. “It was going okay. Then for the last race we were in a rush to finish so we could watch the last few minutes of the game (France v Argentina in the FIFA World Cup). We got lucky and managed to come out in front.”

The Sir Ben Ainslie-skippered Ineos Team UK suffered in the third race when she broke some of the bolts in the worm-drive arrangement that operates the rake mechanism for one of her daggerboards. However spares were kindly lent to the British America’s Cup team which was back in action for the day’s fourth and final race.

Today’s round of the Anonimo Speed Challenge was claimed by .film Racing.

One race behind on the schedule and with a 1530 curfew to start tomorrow’s final race, racing on Sunday is set to start an hour earlier, at 1200pm.