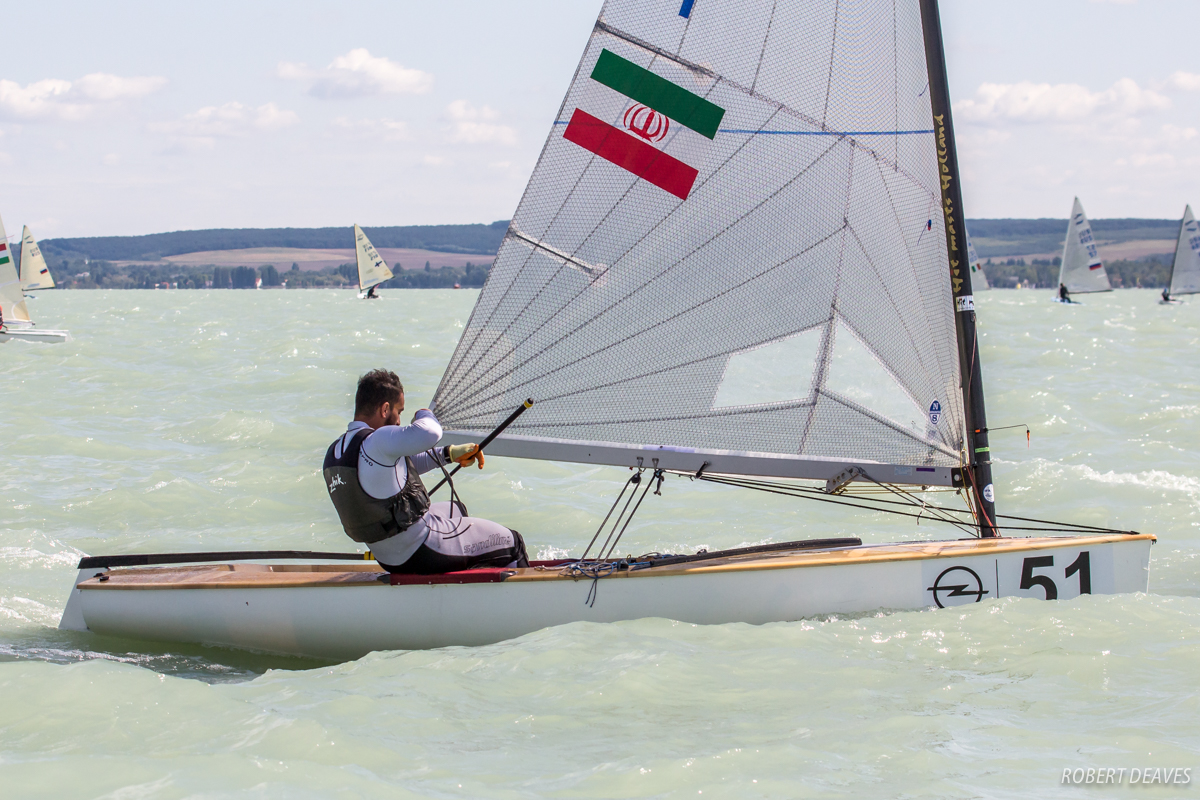 The fifth day of the Opel Finn Gold Cup at Balatonföldvár in Hungary started promising with some nice wind on the lake, but just as the sailors were getting ready to launch, a fog bank rolled in and AP was displayed.

When the fog cleared two hours later, the wind had gone and Balaton remained calm and largely windless through the morning and afternoon. Finally at 15.30 the race office pulled the pin and the sailors dispersed.

There are two days left to sail, with three possible races remaining in the opening series before the final and Medal Races on Sunday.

For the past ten years, the Finn class has been supporting sailor’s dreams through the Finn Class Development Programme (FIDeS). The current support includes part-funding three sailors to train at the Dinghy Academy in Valencia and with some logistical support.

The three sailors receiving funding are Oisin Mcclelland, from Ireland, Ahmad Ahmadi, from Iran, and Rockal Evans, from Bermuda

While Mcclelland is sailing in his second Finn Gold Cup, both Evans and Ahmadi are sailing their first, and are very encouraged by the experience, though hoped they would be doing better on the water.

Evans moved into the Finn just over a year ago. The grandson of 1976 Finn Olympian Howard Lee, he has set his ambition to qualify and compete at the 2020 Olympic Games in the Finn. He even uses the same sail number as his grandfather.

He is finding it a tough challenge: “The fleet is awesome with tough, tough racing. They are tough boats to race at the top level, so I have to get fitter, do more cardio, get stronger and better all round. However, I am learning a lot.”

“I was in Sydney for a month of training before this event with Rob McMilllan in Rose Bay. It was a solid bit of training. Then I went back home for a week and went to Croatia for two weeks to train with Milan Vujasinovic, and that was my preparation for this event.”

He is certainly the right size for the boat at six and a half fleet tall and weighing 103 kg, but knows he has a lot of work to do.

“I have been in the boat about a year now, racing and training, improving slowly but surely, but I have got to make way more improvement before the first qualifier next year in Aarhus.”

“My plans after the Gold Cup are to move to Sydney to train from October to February 2018, and then I come back to Europe, maybe to Valencia, training with a new group of guys there in the lead up to the first qualification event in Aarhus in August.”

Mcclelland has spent most of the year training in Valencia at the Dinghy Academy with the new group that has formed there.

“We got some pretty good training in over the summer. After the European Championship [in Marseille, in May] I felt that I had made a big step forwards in boat speed and set up.”

He placed 30th out of a fleet of 64 “My goal for the year was to finish top 30 at a major event, so it felt like I’d done well there. Top 30 here will be tough considering where I am currently sitting, the number of people here and the trickiness of the racing.”

After seven races he is the highest of the three sailors in 49th place out of 113 sailors.

“The money from FIDeS had allowed me to train pretty much nonstop since the Europeans, and assist in the training cycle of three months leading up to this Gold Cup. It really felt like I came into this competition with the best preparation I have had towards any event I have done.”

“The FIDeS funding has been a big help this season, giving me a more stress free time to train and not worry about the money.”

He says that next for him is solid winter of training in Valencia.

“I think this season was a lot of building. I learnt a lot, made some steps and next year I just have to put it all together and move forward. Obviously the goals are a bit higher next year, but the progress is still there. I am still making progress every day I am on the water.”

He was joined on the campaign trail this year by another Irish sailor, Fionn Lyden, who recently picked up the bronze medal at the U23 World Championship.

“It’s a good thing for sure. With another competitor from the same country, it’s going to make you wake up better in the morning. When you are feeling a bit groggy in the morning it’s definitely great motivation. We get along well and we are making plans to train together next season as well.”

Ahmadi is the most recent inclusion in the FIDeS programme and this Finn Gold Cup is his first major event in the class.

“I really have a good feeling about the races and the guys and how friendly they are, helping each other and I really appreciate that.”

“Every race I did here I learn something from the start to the finish line. It has been really good so far in the seven races so far. It was completely different to what I was expecting but since I joined in, it has been a really nice fleet for racing. I really love it, and I am learning all the time.”

For the future, “I just need to keep training towards my qualification, the worlds in Aarhus and the continental, as well keeping up with the paperwork for the visas and stuff. “

“I want to sail full time and keep improving in the Finn and sailing fast, so I am really looking forward to having good progress in the coming months.”

Racing is scheduled to restart at 10.00 on Saturday. Three races are scheduled before the final race and Medal Race on Sunday.