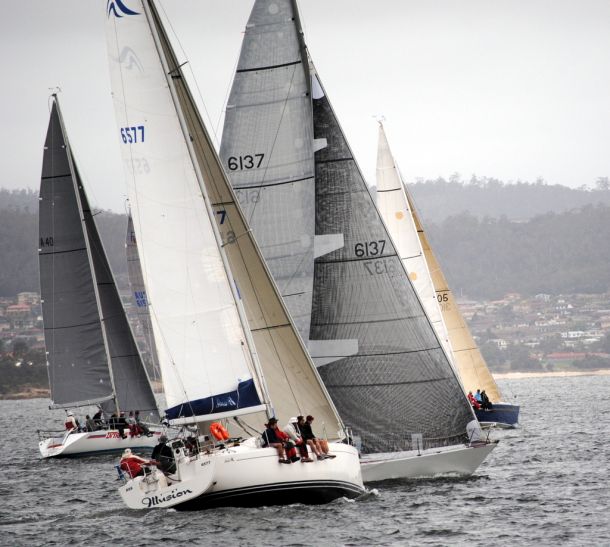 Second place on corrected time in yesterday’s final race of the summer season gave Derwent Sailing Squadron member David Brett and his Hanse 40 Illusion a one point winning margin in the PHS summer pennant for Group A in the Combined Clubs Long Race Series, sailed on the River Derwent and Storm Bay.

Illusion came from behind to outsail series leaders TasPaints (Ian Stewart) and Cleopatra (Matthew Denham) in the PHS category of the 32 nautical mile race down the Derwent and into Storm Bay to Little Betsey Island and the Yellow Bluff mark before heading back up river to the finish off Hobart’s Castray Esplanade. The Hanse 40 also won the Group A AMS category of the final race which gave her third place overall in the Long Race Series.

Illusion was one of five pennant winning yachts in the three groups and handicap categories decided on results in yesterday’s seventh and final long race.

Don Calvert’s Castro 40 Intrigue from the Royal Yacht Club of Tasmania celebrated 30 years of racing on the Derwent by taking out both the Group A categories for AMS and IRC handicaps.

Malcolm Cooper’s Snook 30 Kaiulani from the Derwent Sailing Squadron won the PHS pennant in Group B while the AMS pennant went to Stewart Geeves’ Young 88 Footloose, sailing under the burgee of the RYCT. The other pennant winner, for Group C, was Steve Mannering’s cruiser/racer Camlet Way.

The 28 boat fleet started from Castray Esplanade in a 30 knot northerly, providing an exhilarating spinnaker run down the river, with the faster boats hitting 16 knots. However, conditions became light and shifty at the river entrance for Group A and B boats, notably for the bigger boats between the Iron Pot and Little Betsey.

Back in the river, the wind backed to the nor’west, building again to 30 knots and giving the fleet a hard beat to windward along the western shore to the finish at Castray.

Colin Denny’s The Protagonist took fastest time in Group A, beating John Mills’ Nexedge across the line by 50 seconds while the Jory Linscott-skippered Whistler, “had a blinder” to finish third home, another 30 seconds astern. Whistler won the IRC category and placed second under PHS to Illusion in the final race of the summer.

Craig ‘Esky’ Escott was to have sailed aboard Whistler as back-up helmsman yesterday but called in sick, with David Rees and Tim Jones sharing the helming.

Intrigue placed fourth in the final race under IRC scoring but won the series on a countback from The Protagonist. Intrigue finished back in seventh place on corrected time in Group A AMS, but still ended up a comfortable overall winner from TasPaints and Illusion.

Going into the final race for Group C only four points separated the top four boats and it was much the same at the end of the day, Camlet Way finishing one point ahead of Quebrade (Tim Maddock) with just two points to Alibi II (Rod Williams) and another two points to Kindred Spirit (Alastair Douglas).