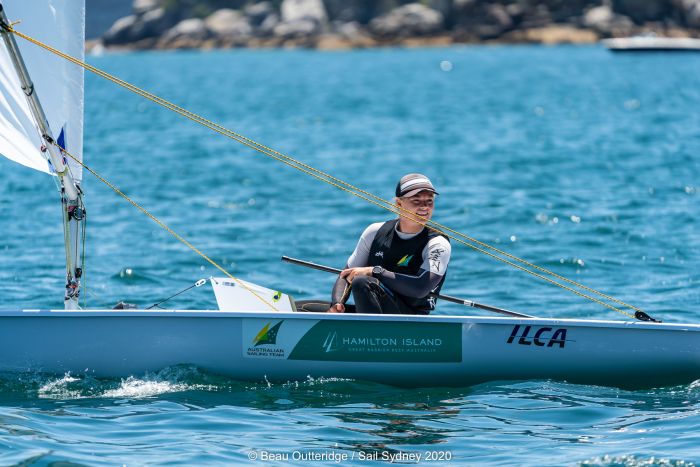 The Australian Sailing Team is going to have to wait another day for a return to competitive action, as Day One of Sail Sydney was called off after a southerly buster hit Sydney Harbour shortly before racing was scheduled to commence.

Sail Sydney will be the first taste of Olympic class racing for many of the athletes since before the COVID-19 pandemic forced the world into lockdown in early 2020.

“The athletes have been waiting months for this regatta to start, so even in fresh conditions they were ready to go,” said Australian Sailing Team National Lead Coach Michael Blackburn.

“They went out in about 5-6 knots and had a nice little warmup, but when we looked to the south, we saw the clouds and wind coming. It was just unfortunate that the front pretty much exactly matched the time of our start, otherwise we may have got a race in before it hit.

The Laser Radial and Finn classes got out to the racecourse before getting sent home, with winds hitting 25 to 30 knots not long after.

“We organised a bit of a practice race on the way back to ensure the athletes got some race work in,” continued Blackburn. “But for now, they will go home, get some rest and be back tomorrow ready to go again.”

Sail Sydney is a critical step in the preparation of the athletes selected for the Olympic Games, as they work their way towards success on Enoshima Harbour in July and August next year.

“The race committee was all set up to race us, but some clouds came over and swung around to a pretty strong southerly,” said Tokyo-bound Laser Radial sailor Mara Stransky. “As we were getting ready to race they put up the AP over H and sent us in, so we went for a little practice race on the way home.”

Racing is scheduled to commence at midday tomorrow, with lighter south-east 15 to 20 knot winds predicted.

The wait is now almost certainly over.