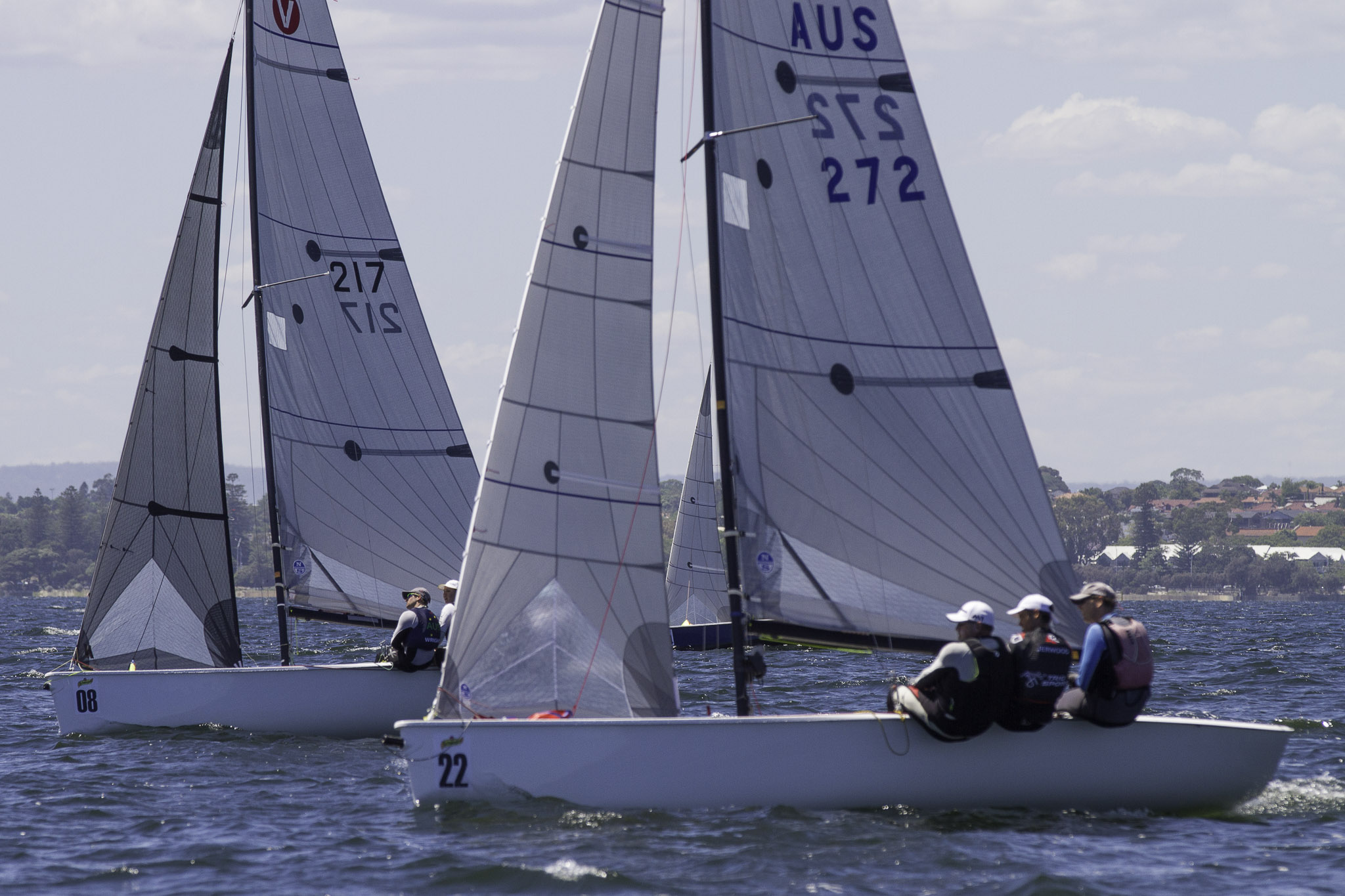 In perfect conditions on Perth’s picturesque Swan River in Western Australia, another four races of the program were completed, leaving just two to go on tomorrow’s final day. Today’s breezes remained relatively steady between 250 and 260 degrees, ranging in strength from ten to fourteen knots – perfect weather for Viper 640’s.

Today also showed that Nick Jerwood is after all, fallible. After racking up another two first placings in the first two races today, his uncharacteristic start in the third put him in the middle of the fleet. No amount of tacking could find a clean lane and he reached the top mark in tenth place, his worst performance of the series. Maintaining that position on rounding the second time, Jerwood then executed a gybe set, heading to the northern side of the course when everyone else went south. The move failed, dropping him back further still to finish sixteenth – easily his worst result for the series.

In race 12, to end the day’s program, Jerwood found himself behind the leaders after the start but sailed strongly to emerge at the top mark in fourth place. On the final downwind leg he sailed inside the leaders and maintained a very deep line without dropping boat speed. At the final gybe for the finish line he squeezed ahead of American Justin Scott and Albany’s Michael Cameron to finish second to Martin Webster, who started strongly, sailed a brilliant first leg and went on to quietly extend his lead for an easy victory.

Denis Jones, sailing with Colin and Graeme Spence, notched his first win for the series in race 11.

“We’ve been starting conservatively so far so I decided to go for broke this time,” Jones commented after his all-the-way win.

Keith Swinton emerged at the top mark in first place in race 11, with Martin Webster and Justin Scott close behind. Downwind speed has been a vulnerability for Swinton, who has one of the heaviest crew combinations in the fleet. “We’re the slowest downhill boat in the whole fleet,” he joked. “There’s nothing we can do about it.” That may be the case, but he has sailed the regatta with remarkable consistency, his worst placing today being a seventh, which leaves him comfortably in second place behind Jerwood on the overall points table.

Justin Scott, who finished second in the last World Championship, has now moved up to third place outright, even with a 17 included in his scoreline. When tomorrow’s races are completed, he should be able to drop the race which will leave him very close to Keith Swinton in the battle for second. Scott had a brilliant day today, scoring three seconds and a third from the four races. Britain’s Lawrence Crispin is carrying a 13 in his score, so he is another who might be in the mix for podium places.

The weather forecast for tomorrow’s final two races is daunting, with 20 knots plus likely on the Swan River. The stage is set for a very exciting finish to what has already been an entertaining series.