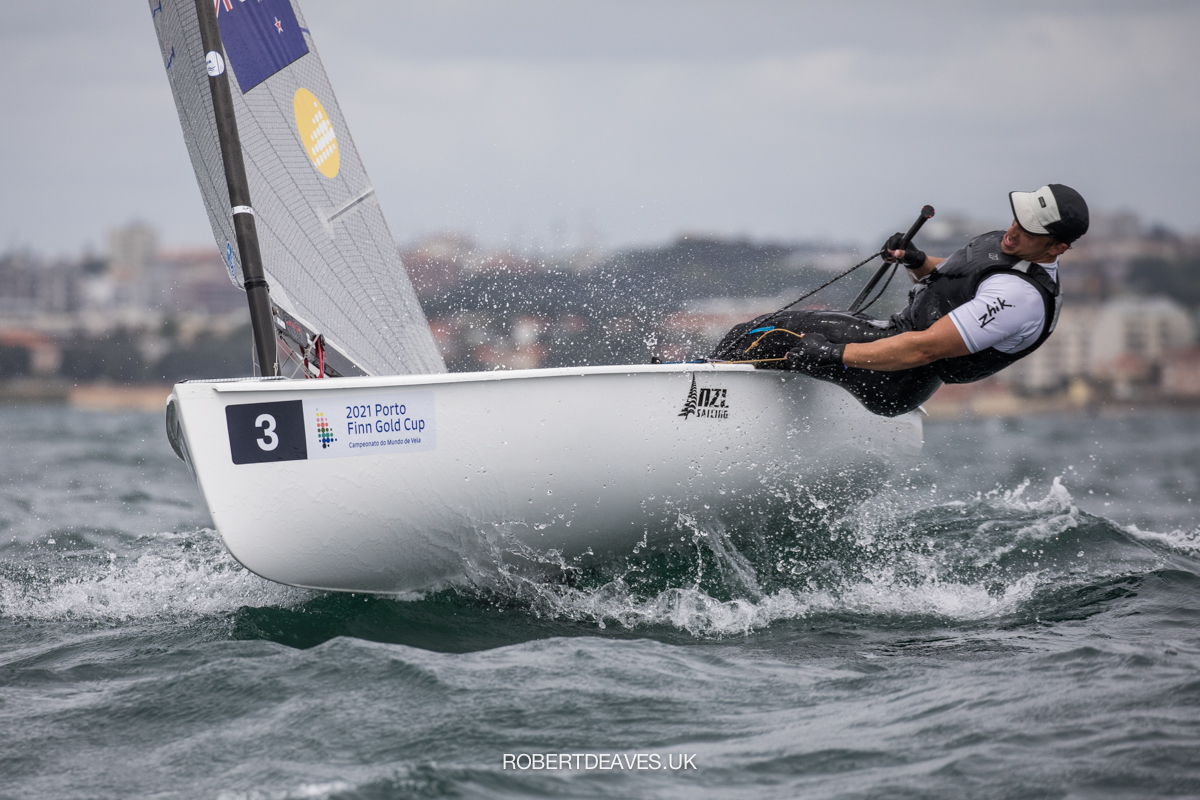 New Zealand’s Andy Maloney has extended his lead at the 2021 Finn Gold Cup in Porto, Portugal, to take a five-point lead into the final day on Wednesday, with three races possible. Zsombor Berecz, the 2018 champion, from Hungary, moves up to second, while defending champion Josh Junior, also from New Zealand, climbs to third.

Race wins went to Brazil’s Jorge Zarif, in the very light first race, before Nenad Bugarin, from Croatia, and Junior won the next two races in winds of up to 16 knots.

After no racing for two days, everyone was happy to get racing again and what a day it was. It was actually a day of three thirds, with a very light opening race of 6-8 knots, followed by clearing skies and a slightly tougher race of 12-14 knots, before finally clouding over and picking up to 14-16 knots in the final race.

The one constant though was the shifting wind, which kept the sailors on their toes and the race teams busy repositioning marks for almost every leg.

Britain’s Giles Scott led round the top from the middle left in Race 4 from Ioannis Mitakis, from Greece and Brazil’s Jorge Zarif. Zarif, the 2013 World Champion took the lead on the second upwind to lead down to the finish, as the soft breeze finally started to build.

Milan Vujasinovic, from Croatia, was fastest to the top mark in Race 5, but was soon surrounded by Kiwis, who passed him downwind. Junior led round the second top mark, but Bugarin found better pressure on the left on the final downwind to move into the lead and take the win, while Maloney moved up to third.

The last race of the day was again all about the left, with many boats overstanding the layline as the top mark was difficult to see in the huge swell. The Kiwis dominated again, but France’s Fabian Pic got the first beat right to round with a nice lead from 2018 Swedish World Champion, Max Salminen.

By the gate Junior was in the lead, but he went too far left on the final beat, while eagle eyed Maloney got the layline spot on. Maloney got there first only to touch the mark as he rounded. After turns Junior was back in the lead and both stretched out to the finish, while Estonia’s Deniss Karpak sailed a great race for third.

Junior said, “It was a pretty nice day. The breeze settled in from the south-west, and we ended up with pretty epic conditions. Still big waves with a chop on top. It was a lot of fun.”

On his and Maloney’s performance over the next two races, “I think we are going well, but still plenty to work on. But I am getting tired very quickly so I wish I could last a little bit longer.”

In the final race, “No one really realized where the top mark was and Andy was first to realize that and managed to pass me and round just ahead of me, but unfortunately, he hit it. He had to do a turn and then it was all on.'”

He laughs, “I didn’t want him to beat me, so I went a bit harder than I have for a while, and just managed to keep him behind me. It was cool to win a race, that’s for sure.”

Bugarin had the best day of anyone in the fleet with a 5,1,7 to keep him in contention for the final Olympic place on offer this week. “It was tough racing today. We had very hard conditions especially in the first race. It was quite tricky and then in the second race the wind increased.

“It was hard work all the way, but I managed to put everything together quite well and am very happy with the day.”

The key moment came on the last downwind in Race 5. “I rounded just behind Josh and was having good downwinds today, so I managed to pass him on the last run, so that was very pleasing.”

Maloney and Junior are sailing their first major regatta for 15 months, after time out for the America’s Cup and SailGP, so their performance is particularly impressive, as well as worrying for everyone else as they prepare for the Olympics in just over two months’ time. In contrast, Berecz has won back-to-back European titles.

Australia’s Jake Lilley dropped to 11th after scoring his worst result of the regatta, a 27th place in Race 6, which has been used as his drop.

The Toyko 2020 European Continental qualifier is heading for a nail-biting conclusion with four sailors inside the top 10. Spain’s Joan Cardona is fourth, but just six points ahead of Croatia’s Nenad Bugarin, while the European bronze medalist, Nils Theuninck from Switzerland, is in ninth place, a further 17 points back. However, it is a long way from being over.

Three races are possible on Wednesday and the forecast indicates a good day of sailing is on the cards. Both Maloney and Junior have heavier discards than Berecz, but with three races, the championship is still wide open. Racing is scheduled to commence at 11.00 local time.