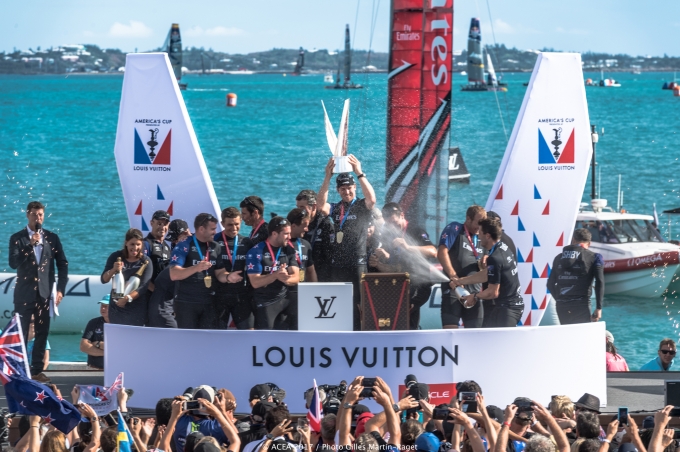 It was billed as a case of “win or go home” in Bermuda today, with the battle to decide who will challenge Oracle Team USA in the 35th America's Cup Match sitting on match point. Emirates Team New Zealand held the 4-2 advantage over Artemis Racing in the first-to-five series, with up to three races scheduled if Artemis could win the first two.

Both boats had their light air daggerboards in, as the forecast was for very light winds, right on the 6 knot minimum limit. Despite the lack of breeze, Artemis managed to lose a grinder overboard in their warm-ups.

When the pre-start got underway, neither skipper seemed keen to engage at close quarters, knowing the lack of manoeuverability could bring a costly penalty. But despite this caution, Artemis did indeed get the blue light after the were a split second too early and had to slow and let the Kiwis get two boat lengths ahead.

Nathan Outteridge, at the helm of the Swedish boat, has picked up more than twice the number of penalties as any other of the five skippers and it is a habit that has proved to be very costly.

This time it looked to have cost him the race and the chance to progress to the Cup match. Peter Burling on ETNZ was his usual calm self and took full advantge, extending to a 17 second lead by the bottom gate.

With no alternative but to split and go looking for better pressure, Artemis tactician Iain Percy called for the left-hand side of the course. Hundreds of metres behind, it all looked like too little, too late but then the Kiwis sailed into a hole and Percy found the pressure he was seeking.

With both boats off their foils, they drifted into the top gate and the impossible happened – Outteridge again picked up a penalty, this time for not keeping clear of ETNZ in the zone around the gate.

It was almost impossible to burn off the two boat length penalty as ETNZ drifted out of control on the other side of the course. Wing trimmer Glenn Ashby was actually swinging off the main sheet as his high-tech Xbox controls were of no use with no pressure on the wing.

Both boats drifted down the course as the wind dropped to below 2 knots and finally they were put out of their misery – the 25 minute time limit expired and the chase boats were able to come alongside and sheepdog their charges back to the starting area.

There was a delay of more than 100 minutes while race director Ian Murray waited for the breeze to fill in and settle. When it did, it was hovering at around 7 knots.

It was cat and mouse in the pre-start, with Outteridge hunting Burling but the young Kiwi slammed the door on a possible hook and had the speed across the line to hold Artemis out to windward before bearing away and running down the course.

New Zealand found the better pressure on the right-hand side of the run and extended. From there it was effectively over. As they showed yesterday, New Zealand has better VMG going to windward and the lead was soon out to 500 metres.

A big right-hand shift caused the marks to be moved, as both boats sped straight down the course to the bottom gate. On the black boat, wing trimmer Glenn Ashby left his cockpit, ran to the wing and made a physical adjustment that gave him more depth.

Artemis needed a huge wind shift if they were to come back into the contest but for once it stayed steady. Team New Zealand swept through the finish gate and into the America's Cup final against Oracle Team USA.

For Artemis it was again a case of what could have been. In this race they were beaten by a faster boat and a more consistent crew. But throughout the challenger series they have shown flashes of brilliance cruelled by unforced errors. They have progressed enormously since San Francisco four years ago but have a long way to go before they are a legitimate challenger to the consistent Kiwi and US teams.

In 2013, in San Francisco, Oracle skipper Jimmy Spithill led his team to one of the greatest comebacks in sport, racing back from a 1-8 deficit to win 9-8 over Emirates Team New Zealand. But Peter Burling wasn’t on that team. The only holdover on the Kiwi starting crew is wing trimmer and skipper Glenn Ashby. The 2017 Emirates Team New Zealand doesn’t appear to be scarred from that experience.

“I think the lessons we learned out of San Francisco has made us stronger going forwards,” Ashby said at the post-race press conference. “The team has been re-built from the ground up and what has been created is a stronger unit than we’ve ever seen before. The motivation going forwards is certainly there.”

“We feel like we’re in great shape to take on ORACLE TEAM USA now,” Burling said from on board just after crossing the finishing line. “Artemis Racing has been an amazing opponent. They’ve pushed us incredibly hard… they've put us in good shape for the America's Cup.”

There is a brief respite now while the Youth America's Cup and J Class events take place, before the 35th Match gets underway on June 17th. Two races are scheduled for each day.