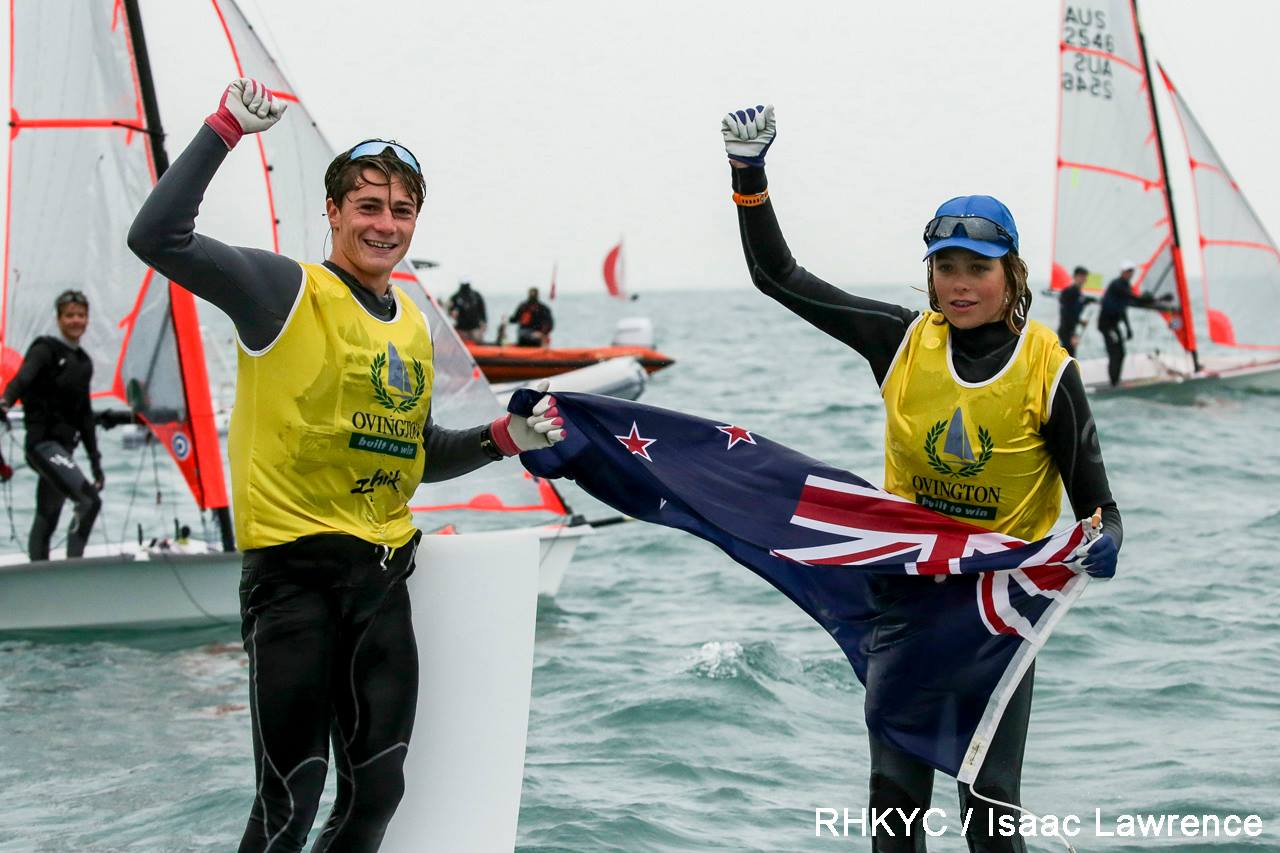 New Zealand’s Francesco KAYROUZ and Jackson KEON (NZL12) took the title of the 2018 Zhik 29er World Champions today with top four results in all races and a nine point cushion separating them from their closest competition.

New Zealand got the edge in the last two races today with an early gybe allowing them to take advantage of a big right-hand shift. KAYROUZ and KEON commented on their win on the race course “How did we do it? Consistency; making sure we sail to our best and to our full potential, sailing every leg like a new race and keeping your head out of the boat. Bow down and send it!

On winning the title, Kayrouz said: “Well it sounds kind of cheesy but it hasn’t sunk in yet, but it feels good. The event’s been good; it’s been challenging and a bit nerve-racking at times, but it’s been a good send.”

New Zealanders Crystal SUN and Olivia HOBBS (NZL2394) took the title as top female team in the Zhik 29er World Championship as well as 21st Overall. SUN and HOBBS were interviewed after their win “We feel pretty good, pretty excited, such a good feeling!  We have been very excited the last few days to be the only girls to make the cut into the gold fleet. It feels good to know that all our training and hard work has paid off. The event was pretty tricky with the wind and all that, but it was really a great, fun event. The racing was pretty hectic, we had all sorts of competition but it was really fun and really enjoyable to race against other people in these tricky conditions.”

Today racers were met with no breeze and a heavy fog as they descended on the Royal Hong Kong Yacht Club Middle Island Clubhouse. Racers were initially held onshore with Race Officer Charlie Manzoni commented “We couldn’t launch you into nowhere with no wind and no visibility.”

However, by around 1130hrs, a cold northerly had started to fill in and steadily built, compressing the fog into a more wet but transparent light drizzle. The gold fleet was sent to their race course in Stanley Bay where four races were sailed. The breeze for the beginning of the first two races race was at the top of the 29er wind limit however changing gears was critical as the breeze tapered off in the second lap of both the first two races.  The breeze moderated for the remaining two races of the day and crossing the line first in the final race of the championship was the first Hong Kong team and winners of the 2017 Hong Kong Open Calum GREGOR and Jon CRAWFORD (HKG2532) who took 6th overall with 26 points. The results from the Silver fleet remain the same from yesterday as the race committee decided to hold them onshore due to the breeze being in the upper class limit.

After racing competitors made a beeline back to shore to pack up their gear in time for the 2018 Zhik 29er World Championship prize giving which will be held tonight at the Royal Hong Kong Yacht Club’s Kellett Island location in Causeway Bay.