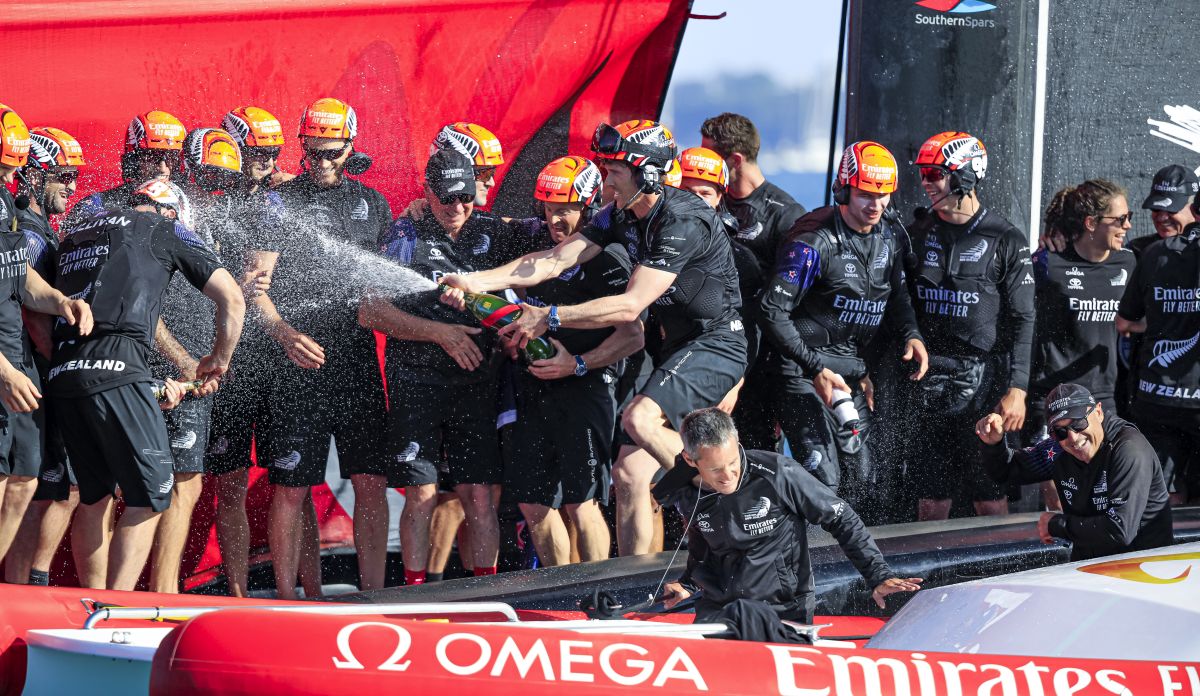 It’s always said that the faster boat wins the America’s Cup. And so it proved today when Emirates Team New Zealand powered away from Luna Rossa Prada Pirelli in perfect conditions on the Hauraki Gulf to close out their defence with a scoreline of 7-3.

The Italians fought bravely and used all their skills in the pre-start, but it was boat speed that made the difference at the end of the day.

For Australians, there may finally be a revival of interest in the Auld Mug as the next Match should now be sailed in the same 75ft foiling monohulls, giving potential challengers a lower cost entry level.

ETNZ CEO Grant Dalton has already started his negotiating gambit with the New Zealand government, suggesting that the 37th Match may be raced in another country – unless of course the government tips buckets of money into the defence. If you are a gambler, the safe money would be on another Hauraki Gulf event in three or four years time.

With the home team just one win away from the 36th America’s Cup, if the sense of occasion wasn’t producing enough tension ahead of the seventh day of racing, the weather was adding extra pressure, teasing all as the sea breeze appeared reluctant to develop.

As start time drew closer there was little sign of the breeze, forcing a postponement. But then, as the clock counted down the breeze started to build and after a 30 minute delay Race 10 was underway.

As both came back towards the line Emirates Team New Zealand had started to windward of Luna Rossa Prada Pirelli, coming in slightly late to the line and tacking off onto port straight away to take the right-hand side of the course. Luna Rossa Prada Pirelli found themselves in a right-hand shift and were unable to tack across. The Kiwis were able to lock into the right-handed breeze and gained the early advantage.

As the pair came together the Kiwis tacked in front of Luna Rossa, forcing the Italians to tack back on to starboard and allowing themselves to go back to the right-hand side of the course. A strong tactic following a solid and confident start.
As the pair came back together for the second time the Italians had made distance and ducked the Kiwis as they crossed. Luna Rossa was now able to get to the right-hand side of the course.

As the breeze fluctuated the key was to get into phase with the breeze. Around gate 1 it was Emirates Team New Zealand that led by 7 seconds taking the right-hand mark while Luna Rossa Prada Pirelli took the left-hand mark. A split was what the Italians wanted if they were to find a passing lane on the downwind leg. The Kiwi task was to close down the opportunities. Downwind, having swapped sides, the Kiwis were sailing at 41 knots to the Italians’ 39 knots but as the pair came into gate 2 the game was still close as Luna Rossa trailed by just 9 seconds.

Meanwhile, Emirates Team New Zealand headed out to the right-hand side of the course, protecting their position whenever required. But as the second beat unfolded the Kiwis started to stretch out their lead, increasing the distance to around 300m on the water.

By now they were free to choose the mark that they wanted at gate 2, taking the left-hand side and leading by 27seconds. Luna Rossa split once again, taking the right-hand mark in an effort to find a different and quicker route down leg 4. But even if they were to find more breeze, the Kiwis were sailing consistently quicker and had pulled the distance out to over 500 m. By gate 4 that had translated into a lead of 37 seconds as they rounded the left-hand mark to head out to the left-hand side of the course.

Behind them Luna Rossa took the right-hand mark and did the more difficult move to get out to the right-hand side of the course and continue to keep out of phase with their opponents. The third upwind leg offered little in the way of a comeback for the Italians. All they could hope for now was for their opponents to make a mistake.

Through the last gate, Emirates Team New Zealand took the right-hand mark rounding 49 seconds ahead as they headed off on the last leg of what would surely be the last race in the 36th America’s Cup.

A race and a win that would see them take the oldest sporting trophy in international sport. After 10 races and a score line of 7:3 the America’s Cup was New Zealand’s once again.

The celebrations began onboard Emirates Team New Zealand after they crossed the finish line, and continued on throughout the night after the prize giving.

The final word goes to Emirates Team New Zealand flight controller Blair Tuke, “What a beauty! Time to enjoy it! To win the America’s Cup on home waters – unbelievable! To know the work that has gone into this. Just huge from the whole team. It has been a massive honour to race in from of five million Kiwis, and to know we have had their support!”