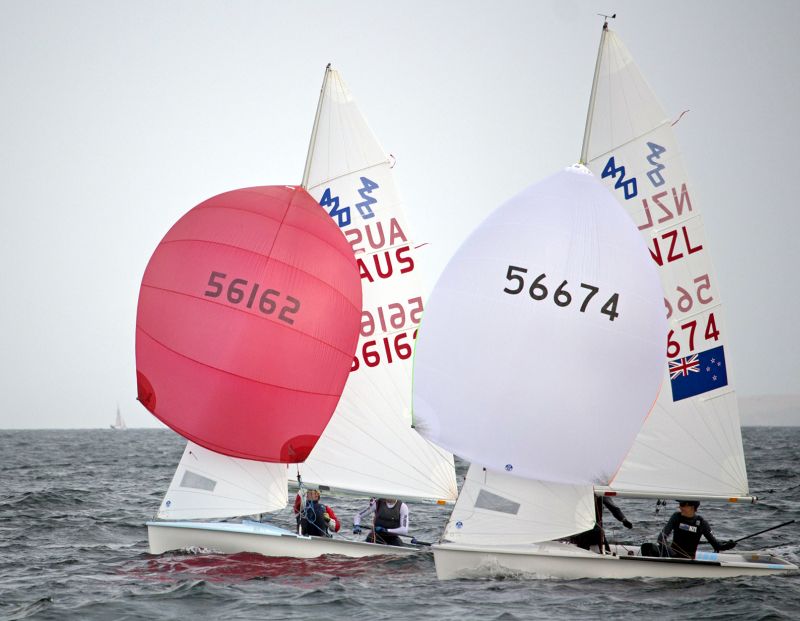 First and second places in the final race on the River Derwent yesterday decided the winners of the Australian championship for the 420 double-handed youth dinghy class, with a New Zealand crew the victors.

, a combined Woollahra Sailing Club/Royal Sydney Yacht Squadron entry, and that was the final order on the leaderboard.

The two crews had gone into the 12th and last race equal on points after the single discard race, the New Zealanders ending with a net 35 points, the Sydney sailors 36 points. Each won two races and, apart from one double-figure finish, they both sailed consistently well.

Third overall was the West Australian crew of Marcello Torre and Tom Larkings who also won two races, to finish with a net 52 points.

Racing was keen between the excellent fleet of 30 boats from NSW, WA, South Australia, Victoria, Queensland and one sole Tasmanian entry, with six different crews winning at least one race.

In addition to the top three crews, other race winners were Cole Tapper and Tyler Creevey (NSW) who placed fourth overall, with a UFD in the final race, Quinn Auricht and Angus Higgins (SA), sixth overall, and Finley Scade and Joshua Whitten (NSW) who ended up 11th.

Male crews dominated the fleet, but Sophie Jackson ad Chloe Harper from Victoria improved through the series to be first female crew in 10th place.

The majority of the 420 sailors will now contest the Australian Sailing Youth Championships which have attracted more than 160 entries sailing in 420s, 29ers, Bic sailboards, Laser Radials and 4.7s and Nacra 15 catamarans.