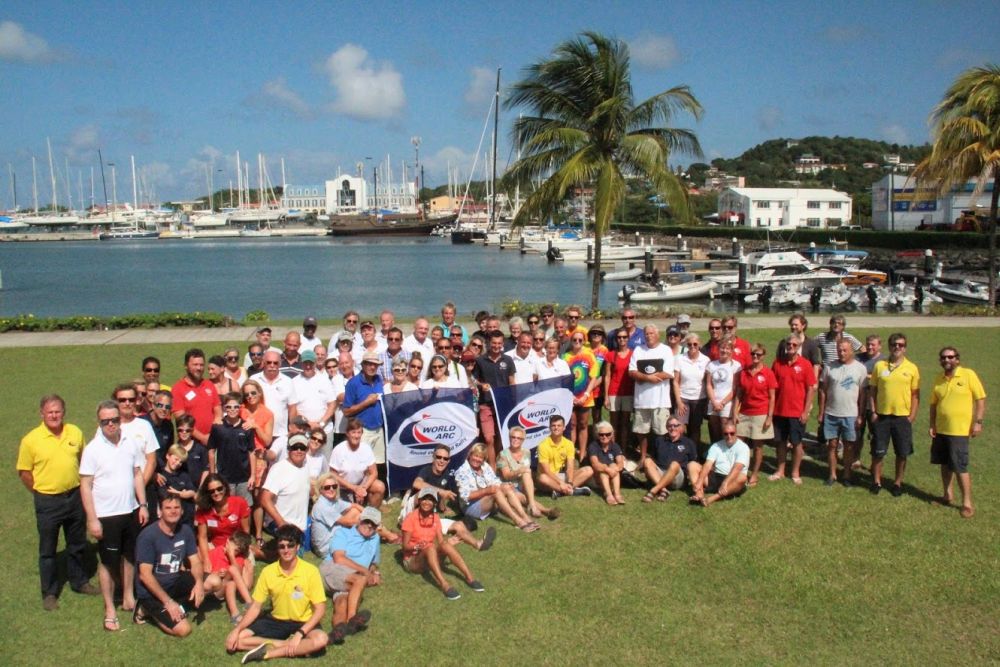 In the rally's Caribbean home port of Saint Lucia, the World ARC 2018-19 fleet began their 15-month circumnavigation with their first passage to Santa Marta Marina in Colombia, whilst in South Africa the seasoned adventurers of the World ARC 2017-18 fleet re-started after a two month break for their final ocean crossing towards Brazil via Saint Helena.

The excitable atmosphere of crews eager to set sail echoed across the different hemispheres and in both Rodney Bay and Cape Town, the crews have enjoyed an organised preparations and social programme to settle them into rally life.

Crews of World ARC 2018-19 began their round-the-world sailing adventure at 1200 noon local time from Rodney Bay, Saint Lucia following years of dreaming, thinking, planning and preparations. “Is this really happening?” said Rick Langille from American Hylas 54 Amara in disbelief on the docks before the start, “I've been dreaming for so long about this that I don't believe it is now happening!”

Lines were slipped and under intermittent heavy rain showers, thirty-three yachts crossed the start line wished 'bon voyage' by a host of local supporters. No-one's spirits seemed dampened as cheers and whoops of joy could be heard across the water as yachts crossed the line. Friendly competition in the fleet was already present and leading the way was Swiss yacht Aranui, closely followed by US flagged yachts Madrigal and Smoke and Roses. German yacht Lunatix, an X-Yachts Xp 50 skippered by Friedrich Biehnert led the fleet past the first and only mark of the course, a turning mark situated near Castries Bay. Four late starters will follow on their 815 nautical mile passage to Santa Marta in Colombia once last minute minor technical problems have been resolved.

In total, 45 boats will sail with the World ARC 2018-19 rally in the next 15 months; some sailing the full 26,000 miles, others joining for the Panama Transit, sailing to Australia before taking a year out to further explore the Pacific or re-joining from a previous edition of the rally. World ARC is a truly international event, with boats sailing under the flags of 14 different nations, and crews coming from more than 20 countries. They are a mix of families, people taking a couple of years away from work, charter boats and those who have sold businesses or taken early retirement. It is a 'once in a lifetime' opportunity for the crews to sail the world's oceans, explore some amazing islands and experience a range of different cultures. “This is the perfect time for my family and I to embark on this adventure.” said Marcus Gamenius from Norwegian yacht Tintomara. “Our children, aged 9, 15 and 17, have already made many friends and are really looking forward to learning more about the world from seeing it for themselves in a way they could never gain from a classroom.”

The preparations programme in Saint Lucia before the start has ensured crews were prepared and excited for their adventure. It has been supported by IGY Rodney Bay Marina hosting the fleet, as well as the Saint Lucia Tourism Authority, and Events Company St Lucia organising social activities including the Farewell Party attended by St Lucia's Minister of Tourism, Information and Broadcasting Hon Dominic Fedee. “The crews have had a busy but enjoyable programme in Saint Lucia,” said World Cruising Club Operations Director, Andy Bristow, “They represent different nationalities, ages, motivations, and crew dynamics and so, in between the serious preparations such as safety checks, seminars and briefings, this week has been about getting to know new cruising friends, who'll be together for the many months ahead. The start from Rodney Bay was a spectacular end to that programme and beginning to their sailing adventure.”

Next stop for the fleet will be Santa Marta Marina on the Caribbean coast of Colombia. The stopover is one of the most popular on the World ARC route, with plenty of good food, exceptional beaches and warm hospitality awaiting their arrival. The boats should make landfall from Friday 12 January.

Boats in the World ARC 2017-18 fleet also set off on Saturday to start their final ocean sailing leg from Cape Town to Salvador da Bahia via the remote island on St. Helena. Marking a year to the day since many of them began their circumnavigation, 2018 will continue to be full of adventure; by April they will sail almost 6000 miles, across the southern Atlantic, up the Brazilian coast and back to Saint Lucia in the Caribbean to complete their round-the-world voyage.

Crew members currently involved in the rally have spent the last 2 months exploring South Africa since they arrived in Richards Bay in early November. “Arriving at the Zululand Yacht Club was our first taste of South African hospitality, and our reception from the club could not have been warmer – we have found this throughout the country.” Said Dan and Em Bower from Skyelark of London. “A gathering of yachts is the excuse for a party, the beer flows freely the Braais get fired up (big bbq) and the locals offer anything from advice to help – driving us around to pick up fuel or finding a stray part. It's a very friendly community.” After a challenging crossing of the Indian Ocean and navigating the notorious Agulhas current, the time spent in South Africa has been an opportunity for the fleet to relax and to recuperate. Many spent the festive season on board with additional friends and family flying in to visit them to welcome the New Year, whilst others took the opportunity to fly home, or explore South Africa and beyond. “We did not have Cape Town on our travel destination horizon but it blew us away way by truly exceeding our expectations. It is one of those magic cities on earth… we will visit it again someday.” Said Eileen from Aurora.

After seeing in the New Year, the fleet have been eager to put to sea once again. Conditions for the start provided an easy introduction to their final ocean crossing, and the forecast promises some favourable winds for the first few days to propel the fleet to the remote island of Saint Helena. From there, the yachts will continue across the South Atlantic to Salvador de Bahia in Brazil arriving in early February to experience the spectacular carnival season. Their progress can be followed online via the Fleet Tracker

It is still possible for boats to join the World ARC fleet in Australia in late August 2018 for the Indian Ocean crossing to South Africa, and onwards to the Caribbean. This route keeps well away from areas of hostility, and allows the participants to enjoy experiences as diverse as the remote atoll of Cocos Keeling and the great animals of South Africa.

World ARC sets sail from Saint Lucia every year and so far 21 yachts are set to join the next edition of the rally departing from Rodney Bay, Saint Lucia in January 2019.