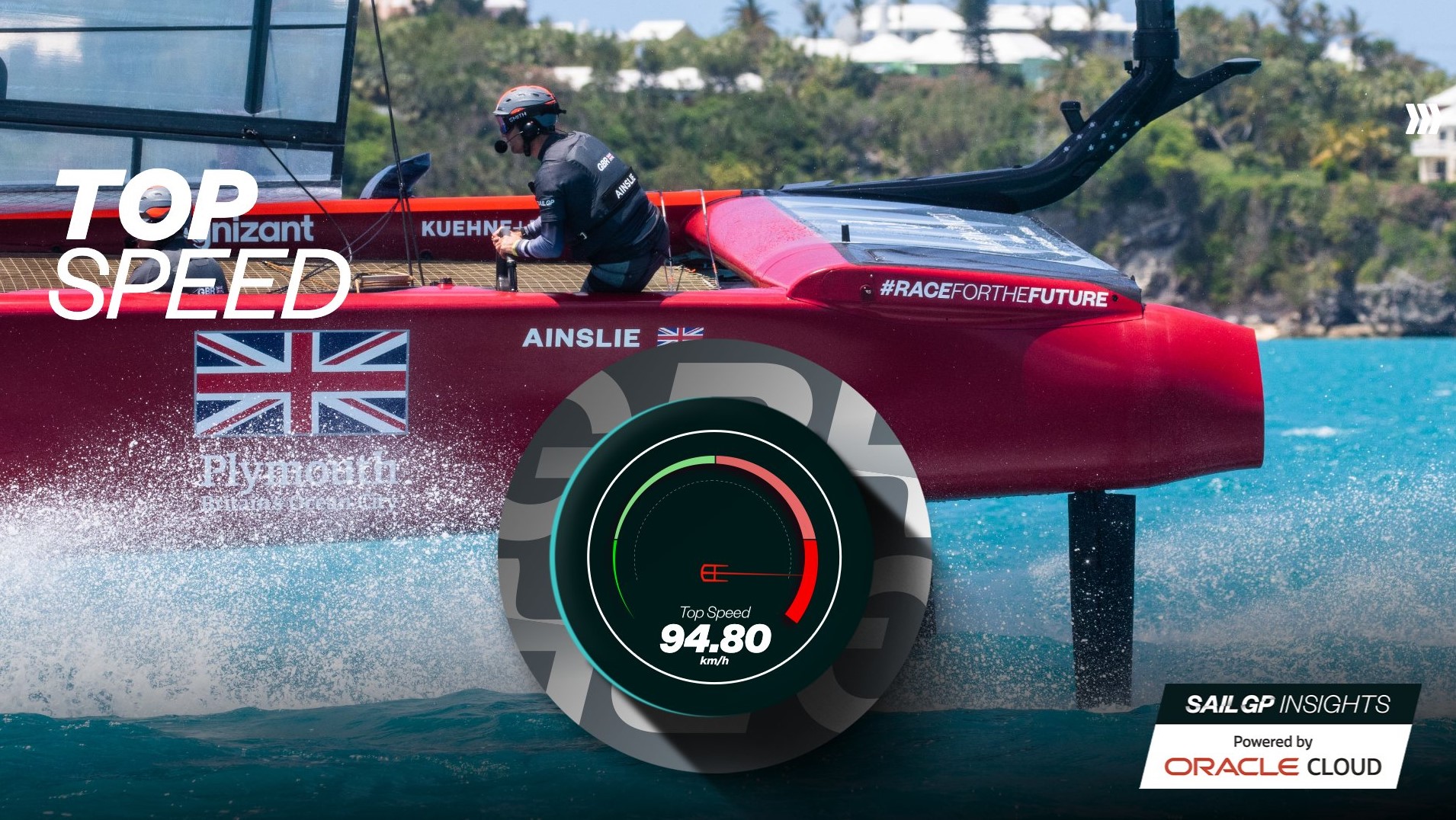 As well as beating Australia to win the Bermuda Sail Grand Prix presented by Hamilton Princess, Great Britain also dealt a further blow to the Aussies by breaking their SailGP racing speed record.

Tom Slingsby’s team had held the F50 racing speed record since the Cowes event in Season 1, when Australia crossed the finish line of the first race hitting 92.6 km/h (57.5 mph).

But the Brits – who won only one of the five fleet races in Bermuda before claiming victory in the winner-takes-all Final – clocked a remarkable 94.8 km/h (58.9 mph) on the Great Sound on the team’s way to being crowned the first event champion of Season 2, data powered by the Oracle Cloud reveals.

Great Britain set the new speed record rounding the first mark in the fourth race of the event – the only fleet race Ben Ainslie’s team won over the two days of racing before winning the Final.

This new record speed was set not only during the first event of a new season, but also with the F50s utilising some cutting-edge new technology.

Due to the strong wind conditions on the Great Sound on the second day of the Bermuda event, the new 18 meter wing was installed on the F50s and used in official racing for the very first time.

Compared to the regular 24m wing, the 18m wing has less surface area and less drag; it has a smaller profile, but you don’t need as much wind to power the F50 given the wind is stronger. Furthermore, as the 18m wing is smaller it is also lighter, which provides extra benefits when it comes to hitting top speeds.

The eight SailGP teams all used the 18m wing on the second day of racing in Bermuda given the conditions, with the foils, rudders and jibs also altered to cope with the 20+ knot wind speed.

British grinder Neil Hunter expressed his delight at he and his teammates setting a new speed record in SailGP, especially with the new wing in use.

“Race four, mark one was a huge moment of the event in Bermuda,” he began. “It was the first bear away for the fleet using these new little ‘baby’ wings in big breeze.

“Going round and hitting the F50 record racing speed of 94.8 kmh, with all the fleet rounding the mark super close, just shows us the development of these boats.

“It’s one to remember – it was phenomenal!”

The windy conditions resulted in some dramatic incidents – including a collision between Japan and the United States, and then a US capsize – but also some thrilling racing, and the British team is surely delighted to have claimed not only victory, but also a new SailGP record.