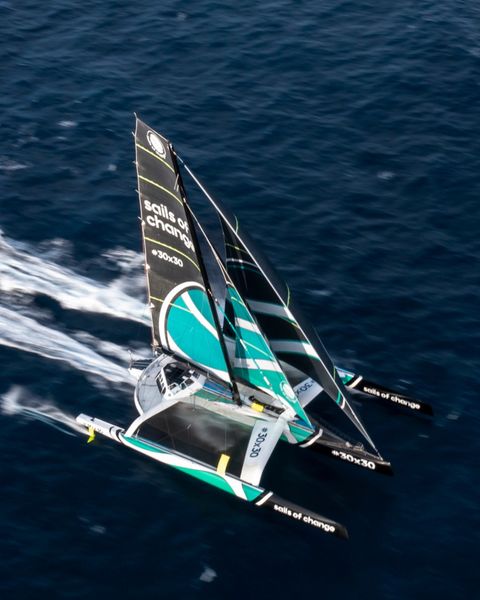 Another record chase is on the horizon - Spindrift pic

Dona Bertarelli and Yann Guichard are announcing an ambitious program for Spindrift, with the crew of the TF35 returning to the six-event circuit for a second season, while the maxi trimaran Sails of Change will be on standby several times throughout the year to try to break a series of records.

“The TF35s are demanding and technical latest-generation foiling catamarans. They call for supreme flight control and pinpoint accuracy in terms of coordination,” Guichard explains.

“In 2021, we finished the first season in 3rd place with the freshly delivered boats. We’re extremely proud to have been able to compete so quickly with a newly formed team. We’re keen to repeat this performance throughout this year’s championship and see if we can better our 2021 results.

“Moreover, we will be returning to standby at the end of the year with our maxi-trimaran Sails of Change in the hunt for a favourable weather window for the Jules Verne Trophy (crewed around the world record under sail).

“To complement our training sessions, we’ll also go on standby from mid-April to mid-May, at the end of June and then again throughout August for a string of potential record attempts.

“According to the weather, we’ll select the course we believe will get results. That way, we can choose to set sail on the Discovery Route (Cadiz in Spain – San Salvador in the Bahamas), the 24-hour record (greatest distance covered under sail in 24 hours), the Round Britain and Ireland, Cowes-Dinard and/or Plymouth-La Rochelle.

“This variety in sailing, on two very different boats with a range of objectives, really appeals to us. All the sailors are looking forward to competing. Right now, our shore crew is preparing both boats at our base in Saint Philibert, south-west Brittany, to ensure they’re ready to go in time for the first training sessions,” Guichard ended.

A highlight in the past month was the One Ocean Summit hosted in Brest from 9 to 11 February.

Dona Bertarelli had the opportunity to address the official plenary session attended by the President of France, Emmanuel Macron, heads of state and government, representatives of the UN, the European Union, non-governmental organisations and directors of a number of giants in European maritime transport.

Her aim was to carry a message from the international scientific community and call on governments to protect at least 30 percent of our planet by 2030.

Bertarelli explains: “We’re already championing this ‘30 x 30’ message on both our boats to raise wider public awareness, and we will continue our work to raise awareness among the younger generations with our Spindrift for Schools program. We very much hope that these complementary activities can contribute to protecting our planet.”

On 31 January 2022, Bertarelli and Guichard announced the end of Spindrift’s standby for the Jules Verne Trophy record attempt.

This date also heralded the end of Jean-Sébastien Chénier Proteau’s mission as Executive Director for Dona Bertarelli and Yann Guichard’s racing stable, a role he began in October 2019. Indeed, in agreement with the couple, the native of Quebec has accepted an offer to head up the brand-new Canadian team on the SailGP circuit.

“Jean-Sébastien has done an excellent job. His support was invaluable when we launched Sails of Change and he oversaw the maxi-trimaran’s lengthy refit as well as our season on the TF35 circuit. He has created a solid and professional team, and his human qualities are indisputable and appreciated by all the team,” Guichard reflects.

“I offer him our sincere thanks and wish him all the very best for this exciting project, which will enable him to defend his country’s colours.”

To succeed Chénier Proteau’s, Yann Guichard has called upon the services of Sébastien Duclos, who has been with the team for the past month and officially took over the management of the racing stable on 21 February 2022.

The former Deputy Director of Team Banque Populaire explains: “Spindrift has been around for over 10 years. Since its creation, the team has won numerous races and broken records. I’m delighted and honoured to take on the role of Executive Director for such a prestigious structure.

“Previously, I’ve had the opportunity to work within the IMOCA Class, for Race Management organisations, and for another team for more than 10 years, all of which helped me acquire considerable expertise in sailing projects.

“With Spindrift, I’m eager to continue building on what I’ve achieved so far and bringing this experience to bear in the racing stable.”