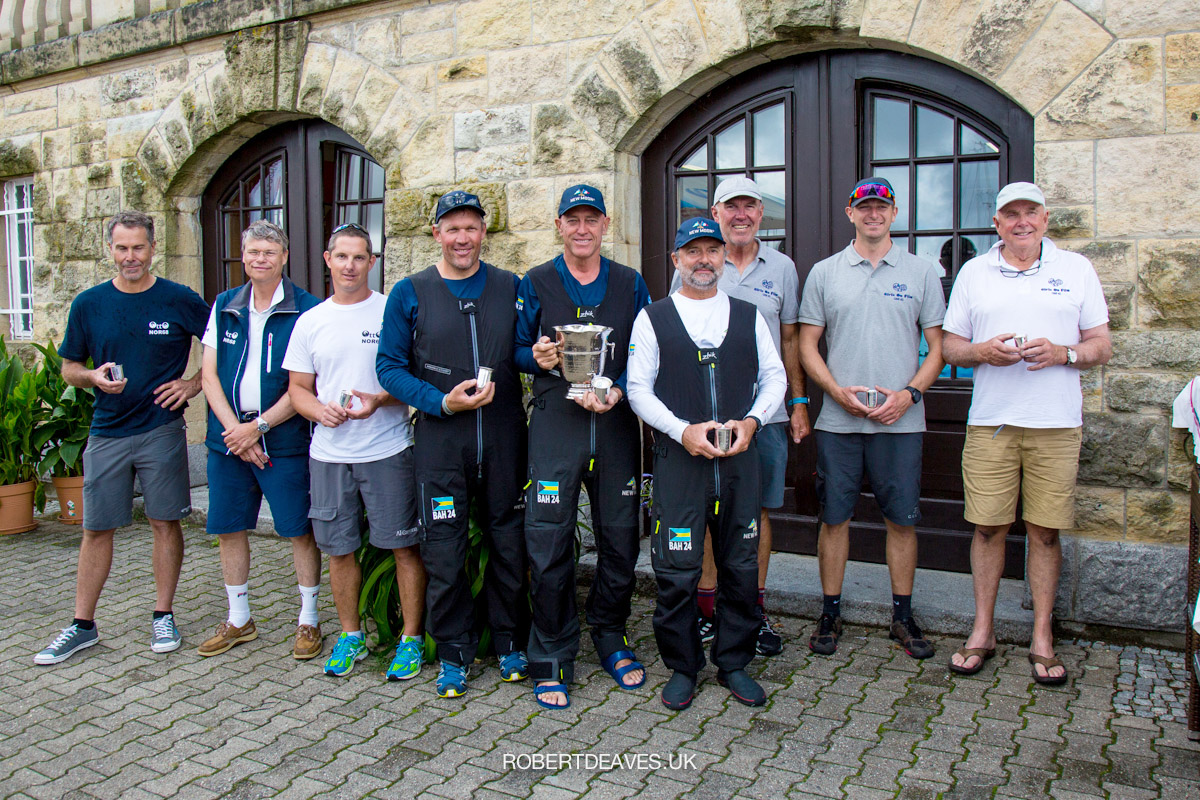 For a second day in a row the wind abandoned the Wannsee in Berlin, Germany, therefore the 2021 5.5 Metre German Open at the Verein Seglerhaus am Wannsee (VsaW) was decided by the long distance race on Friday.

Sunday began with low cloud, drizzle and the non-existence of any sailable breeze, with little optimism for any change before the 1500 cut-off.

While the rain did stop and the sun reappeared, the wind didn’t and race team reluctantly signalled the end of the regatta at 1200 so teams could start craning their boats out early. Most had already decided there would be no more racing and had headed to the crane.

New Moon II (BAH 24, Mark Holowesko, Christoph Burger, Peter Vlasov) took the German Open on the result of Friday’s long distance race, the only race sailed all weekend, after both Saturday and Sunday were lost with no wind. After weeks of good breeze in Berlin there was disappointment all round.

Holowesko said, “It was a difficult regatta weather wise, but a fantastic venue. Very friendly people and a very interesting race course. It was quite fun having that long first race. Thankfully we had a week of training on Garda before we got here, but we had a good time. It’s a nice place.

“From here we go to Cannes and then go back to Garda for the Alpen Cup, so looking forward to that.”

The fleet of 15 5.5 Metres in Berlin was certainly a mix with just five moderns, and a range of Evolutions and Classics, but one of the boats that certainly caught the eye was Sünnschien (GER 17, Uwe Baykowski, Sabine Kupfer, Michael Schulz). This boat was awarded the Concourse d’Elegance for the most beautiful boat at the event.

Sünnschien was most successful German 5.5 Metre boat in Olympic times, getting fourth in Acapulco in 1968. A Briton Chance design, and built in Ontario, Canada in 1967, she was renovated by the current owner Uwe Baykowski, from Kiel, after finding her in very poor condition in The Netherlands.

Baykowski said, “She was in very bad condition when I got her, though the hull planking was in pretty good condition. It’s cold moulded Honduras mahogany, and the keel was good.”

He says it took four winter’s work to bring her back to pristine condition.

The cockpit is conspicuously larger than many 5.5 Metres.

“I got the drawings from Briton Chance, and now the deck is as the original. When I got it, it had a different deck, so this is the original shape.”

Sünnschien has an attached rudder, as the Olympic boats had. “I would like to have a detached rudder, but it wouldn’t be original, so I’ll leave it as it is. The rigging is also original, with an aluminium Proctor mast.

“Next we go the French open at the Régates Royales in Cannes, and I hope there will be some more Classics there to race against.”

With no major championship this year due to COVID, there is a lot of interest in the three remaining international events this year. Next up is the Regates Royales and French Open, from 20-24 September, in Cannes, France followed by the Herbstpreis from 1-3 October, Thun, Switzerland and then finally the rearranged Alpen Cup from 21-23 October, in Torbole, on Lake Garda in Italy.