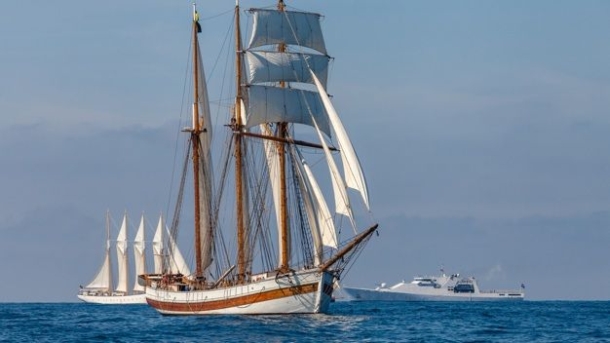 Whilst there has been no change in Classes A, C and D Tecla has now moved into 2nd position for Class B and Vega Galmeby into 3rd position.

Paul Bishop, Race Director, Sail Training International said, “The strong northerly winds are providing the crews with some tough sailing and there is some close racing at the front of the fleet. Spaniel (Latvia) is ahead on the water with around 150 miles to the finish line. She is closely followed by Gigi (UK), Tomidi (Belgium) and Antwerp Flyer (Belgium).

“Stad Amsterdam is in front of her Class A rivals but Fryderyk Chopin (Poland), Statsraad Lehmkuhl and Mir (Russia) are within just 10 miles of her.  The wind is due to gradually veer to the north-east, so those Class A ships that have opted for a more northerly course, may begin to close the gap so the scene is set for some close tacking and covering tactics over the next 24 hours.”

At the end of the first full day of racing in in The Tall Ships Races 2014 from Harlingen (Netherlands) to Fredrikstad (Norway) current positions by class are:

Please note that these are provisional results and they are likely to change.

To follow the fleet head to the Yellowbrick Tracker.