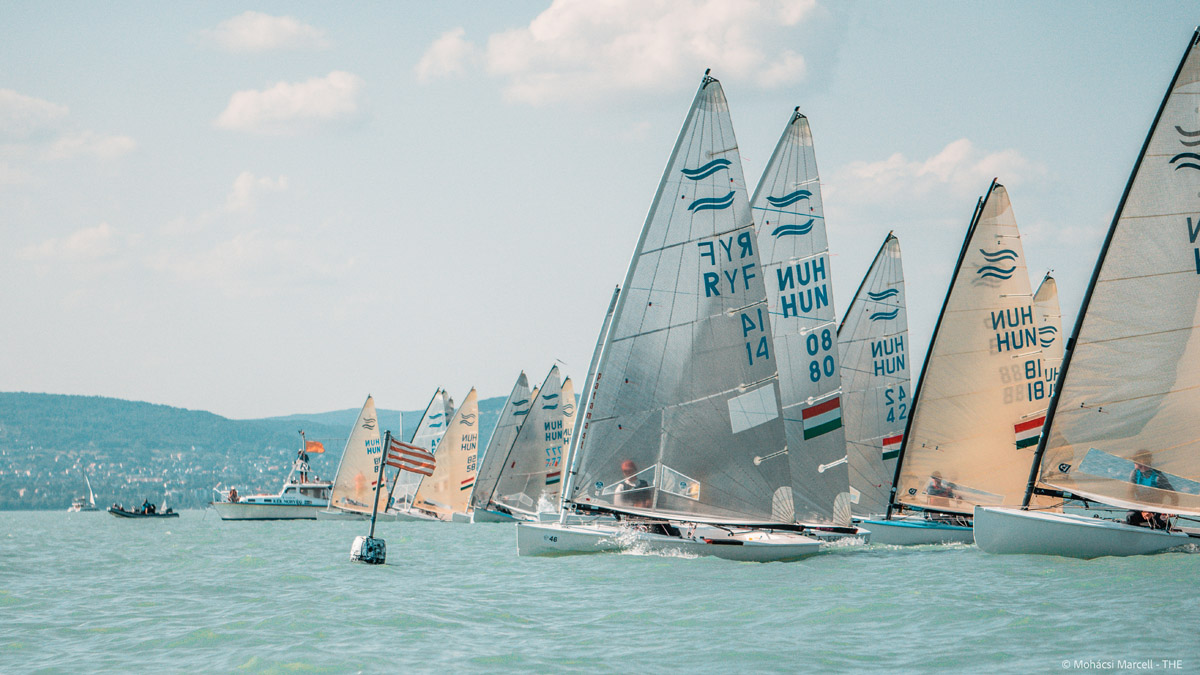 Domonkos Németh has moved into a 14 point lead after winning both races on the second last day of the U23 Finn World Championship for the Finn Silver Cup; meanwhile Levente Rácz and Bence Rácz are separated by just four points in second and third.

After a very hot and windless Tuesday, it was slightly cooler for day four with a south-westerly breeze down the lake later in the day.

Race 7 started in 10-12 knots, quite shifty and cloudy with the pressure up and down. The right looked good but Németh and Bence Rácz worked well through middle left with boats on either side of them. At the top Németh led from Mikhail Yatsun, from Russia, Andres Ivan Lloret Pérez, from Spain and Sjoerd Hofland, from The Netherlands.

Németh pulled away downwind with the free pumping with the rest following in a close group. On the second beat there was more pressure on the left and most of the fleet went that way, but Lloret Pérez tried the right and lost a lot of ground.

Németh led from Yatsun, Levente Rácz and Bence Rácz and with no free pumping on the last downwind, the positions stayed the same.

Special mention to Noémi Rátosi, the only girl in the fleet, sailing her first Finn event. She sailed very well tactically to record her best result of the event so far, a 16th.

The breeze dropped down to 8-10 knots for Race 8, but was less shifty than the previous race, with more steady pressure.

Everyone wanted to go left and all the leaders came off the line and kept going into more pressure. In the end some had trouble coming back and the ones that tacked early came out best and a few boats further right also did well.

At the top it was Németh from Levente Rácz, Ábel Szűcs and Panagiotis Iordanou, from Cyprus.

Not much changed downwind except Zoltán Veisse sailed to the right and made big gains to move up to second.

The second beat was quite tight, with the fleet not as far left as the first beat. Németh rounded first to lead down to the finish to win from Veisse, Levente Rácz and Iordanou.

Németh commented, “When I went out I was a bit wary as there was not much breeze then some wind came down at 10 knots. Actually I wanted to sail consistently and not risk anything and I did two pretty good starts, and got two firsts, so a really good for me today.”

The Finn U23 World Championship concludes on Thursday. Up to four races are possible on the final day, but the forecast is not overly optimistic.