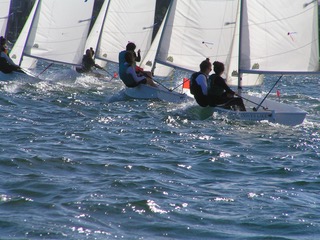 Teams racing at a previous Championship

The Australian Team Sailing Association is proud to announce their two major regattas for 2019 are to be hosted in Tasmania – jointly by the Sandy Bay Sailing Club and The Royal Yacht Club of Tasmania.

“We have recently gone through a refurbishment making our club ready for these types of regattas.

“We have previously held very successful Teams Racing regattas and are in the fortunate position of providing great viewing from the clubhouse for all spectators.”

These two significant schools Team Racing Championships, to be held in June and July this year, will bring hundreds of Australian and New Zealand sailors, their coaches, managers, families and supporters to Hobart.

From this regatta, the leading Open and Female teams qualify for selection to represent Australia against New Zealand in the subsequent Interdominion Championships in July.

Commodore Allison added: “We look forward to welcoming all competitors for both these Championship regattas and we hope that the weather gods are on our side”

Teams for both Championships will consist of up to eight sailors, and along with their managers, coaches, supporters and families, will bring several hundred people to Hobart for each regatta.

Team Sailing is a highly tactical, fast moving, high turnover series of short course races, each between two teams each of three boats. Racing as a team it is the combined result for each race that is important rather than just first past the post. Sailing in Pacer dinghies crewed by two sailors, the regatta organisers aim to complete many races each day – up to 90 races may be the target.

This rapid turnover necessitates racing close inshore to allow for quick changeovers of teams through the shared fleet boats to be used for their next races.

Racing close inshore provides an exceptional opportunity for onshore spectators and supporters to get far closer to the on-water activity than is often possible with major fleet sailing regattas.

With team changeovers happening on Nutgrove Beach, the Sandy Bay Sailing Club is a superb venue for this form of sailing. Its location and facilities are perfectly tailored to supporting great Team Racing regattas.

The Royal Yacht Club of Tasmania’s Nick Hutton, a very experienced and expert International Race Officer, has been invited to undertake the role of Race Officer for both Championships.

ATSA President, David McCracken said: “The Australian Team Sailing Association, acknowledges the enthusiasm of the Tasmanian Sailing community in supporting both events and is confident the regatta’s success will draw on the local experience, support and commitment to Team Sailing in Tasmania.”

“Tasmanian schools, their teams and their supporters are consistent in leading Team Sailing nationally and we see that support now with the commitment of Sandy Bay Sailing Club and the RYCT to partner in the delivery of these two significant regattas.

“Last year’s National Championships in Blairgowrie set a high benchmark for our regattas and we can all look forward to the opportunity to showcase the best Team Sailors in Australia and Internationally on the Derwent in 2019.”