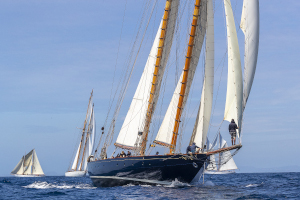 Just when it seemed that the four giant schooners were likely to spend the day tied to the dock, the sea breeze filled in perfectly allowing the penultimate race of Capri Classica to take place, but sadly, due to the light forecast, the much-anticipated 19th century-style start from anchor was abandoned.

Nonetheless the four schooners still had great racing in a competition which has effectively turned into a pair of match races with the giants – Mariette of 1915 and Naema – in one ring and The Classic Yacht Experience-owned schooners – Puritan and Orianda – in the other.

The navy blue schooner seemed about to perform a horizon job, like yesterday, until the breeze dropped, forcing her to shave Punta Campanella, as Naema managed to stay high, laying the mark perfectly.

After Mariette of 1915 tacked on to port and was approaching the mark she infringed Naema, which was closing on the mark on starboard with rights. In fact Mariette of 1915 should have accepted a time penalty, but in the event she carried out a 360° penalty turn – no small undertaking in a 138ft 180 tonne beast of a vessel with eight sails up – leaving her far behind her rival.

But as on Wednesday all was not over. On the final leg off fickle Capri, the two mega-schooners split tacks, only for the breeze to disappear.

As Naema’s helmsman Hank Halsted observed: “We thought we might have the exact reversal of the first race when Mariette led us around the course and sailed into a hole. In fact this time we spent an equivalent time stopped on each side of the course.”

Mariette of 1915 was able to close, but was awarded a 20% elapsed time penalty for her windward mark infringement. This left Naema to win the day comfortably.

Halsted, once creator of the ‘Bucket’ superyacht regattas, was disappointed that the racing hadn’t been closer, as it had been on Wednesday, but still relished the competition. “Naema is simply not as powerful a boat and our sail plan isn’t as well articulated.

Mariette has been managing those sails since 1915 while this is our fourth regatta! We have 30 people from ten countries speaking four different languages – but everyone on this boat is passionate and their common language is ‘schooner’.”

Behind them Orianda and Puritan were locked in their own personal match race and while the smaller 85ft Orianda led up the first beat, the duo were involved in their own port-starboard incident at the top mark: Puritan came in on starboard with rights but on this occasion Orianda played it safe and ducked her transom. A nimble tack ensured Puritan took the lead.

He recounted. “We had good pace and touched nine knots downwind. Then off the Sorrento coast there were difficult wind conditions, the wind shifting by 30-40°. We were a bit slow to ease the mainsail and almost did an involuntary tack which lost us two or three minutes to Orianda. Then there was a calm final leg.”

Ultimately Puritan’s position corrected out leaving her behind Orianda, but at least was a point on board after having had to retire from the previous two races due to ensnared a fishing net on day one and running out of wind south of Capri yesterday.

“It was good fun today which was important – at least all four crews had good competition,” said de Vargas Machuca. And this was despite some sore heads this morning, after last night’s party that ran into the early hours across Mariette, Orianda and Puritan.

This had followed a display in which all of the crews were able to show off their traditional schooner craftsmanship and skills such as rope work and leatherwork. This competition is currently being judged – the winner will be announced at tomorrow’s prize giving in Capri’s Marina Piccolo.

Overall Naema leads going into the final day of Capri Classica with another light day forecast.