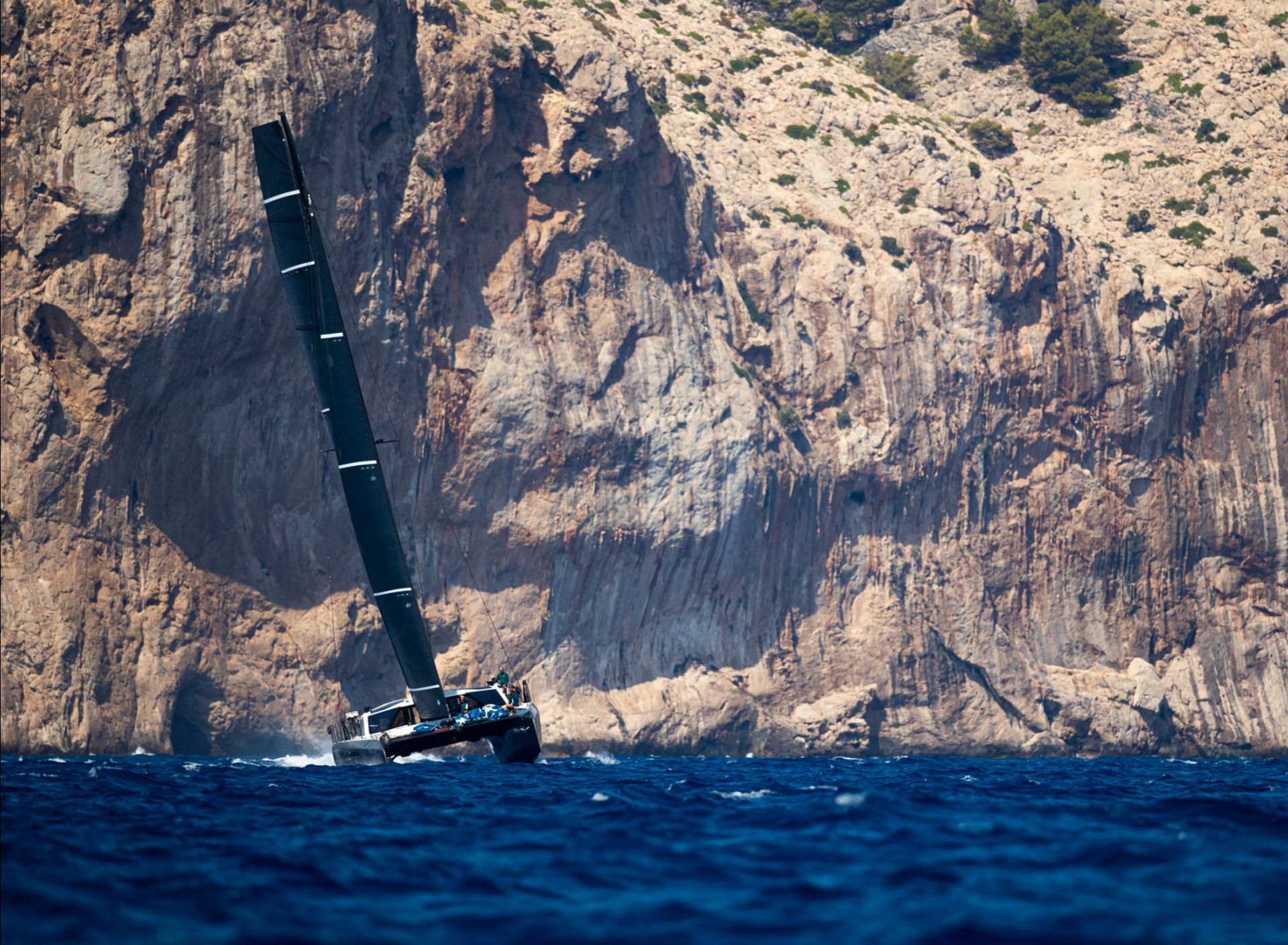 Racing set against a dramatic backdrop

The level of intensity ramped up several degrees at the 2021 Multihull Cup in Mallorca, Spain today, with a building breeze producing close encounters at several points on a long 23-mile course.

When the spray settled, the experienced crew aboard Allegra looked to have one hand on the trophy, maintaining their perfect scoreline with a second victory off the Mallorcan coast.

However, the Green Marine built flying machine had to work for the win, receiving the close attention of their Gunboat rival, Highland Fling XVII, all the way round. The level of competition across the fleet was evident from the outset, with Coco de Mer’s enthusiasm seeing her just jump the starting gun and have to restart.

As on the opening day, there was an early split on the initial upwind leg, though neither option delivered a clear-cut advantage. Allegra and Highland Fling were neck and neck at the first mark, the former just ahead, with Coco de Mer following ahead of R-Six.

The extended course again took the fleet into the Bay of Palma on a full-on drag race around Ilot de Sec, before a long leg to the west, to a laid racing mark off Cabo de la Mola on Mallorca’s rocky south-west coast.

With the breeze building from 8 to 18 knots, the downwind leg proved a true test of crew work as the performance cruising cats gybed towards the mark.

Highland Fling and Allegra were again scrapping for the lead on the water while hitting speeds of up to 20 knots. This time the VPLP designed Highland Fling emerged as the leader in the skirmish at the Mola mark, albeit by the finest of margins.

Their duel resumed on the upwind leg to the finish, with the lead changing hands a number of times. Perhaps making the most of her longer 84ft waterline, Allegra edged ahead, covering the 68ft Highland Fling on the final tacks to the finish. Allegra took line honours by just over a minute after two hours and 21 minutes of racing.

“It was a beautiful day today, with great conditions and a great battle,” Cam Appleton, tactician on Highland Fling said.

“Racing against Allegra, we know that the two boats have some different characteristics. We had some great racing against them. We know we have to do a little more on the racecourse to get out in front of them.

“We’re on a steep learning curve and we’re having a bit of fun doing it. We had a great race today and heading down to the final mark we had 20 knots of boat speed.”

Though experiencing less close quarter racing at the back of the fleet, the 67ft Morrelli & Melvin designed R-Six is revelling in the Multihull Cup. Her crew are delighted with her second place today once the ORCmh rating system had worked its magic.

Skipper and helm, Robert Janecki said, “Being the last to cross the finish line, you can get the feeling you have lost, but we felt we had sailed well today. And the crew did really well too, so we were hoping to be rewarded, and in the end second place is a very good place to be.”

Having competed in all three previous Multihull Cups – and a winner at the first event in 2016 – the owner and crew of R-Six are well aware of the regatta’s unique appeal.

“We are focused on racing the boat, and as the first one built by Hudson Hakes Marine, we’re proud to have been at all the Multihull Cups,” Janecki said back on the dock at the Port Adriano base.

“There are some fantastic people here and a fantastic organisation, it has a very cosy atmosphere. This was also the first event we actually won, so it’s very good to be here,” he said, adding that they were happy to have Polish 470 Olympic sailor, Jolanta Ogar-Hill, on board as a guest in yesterday’s race.