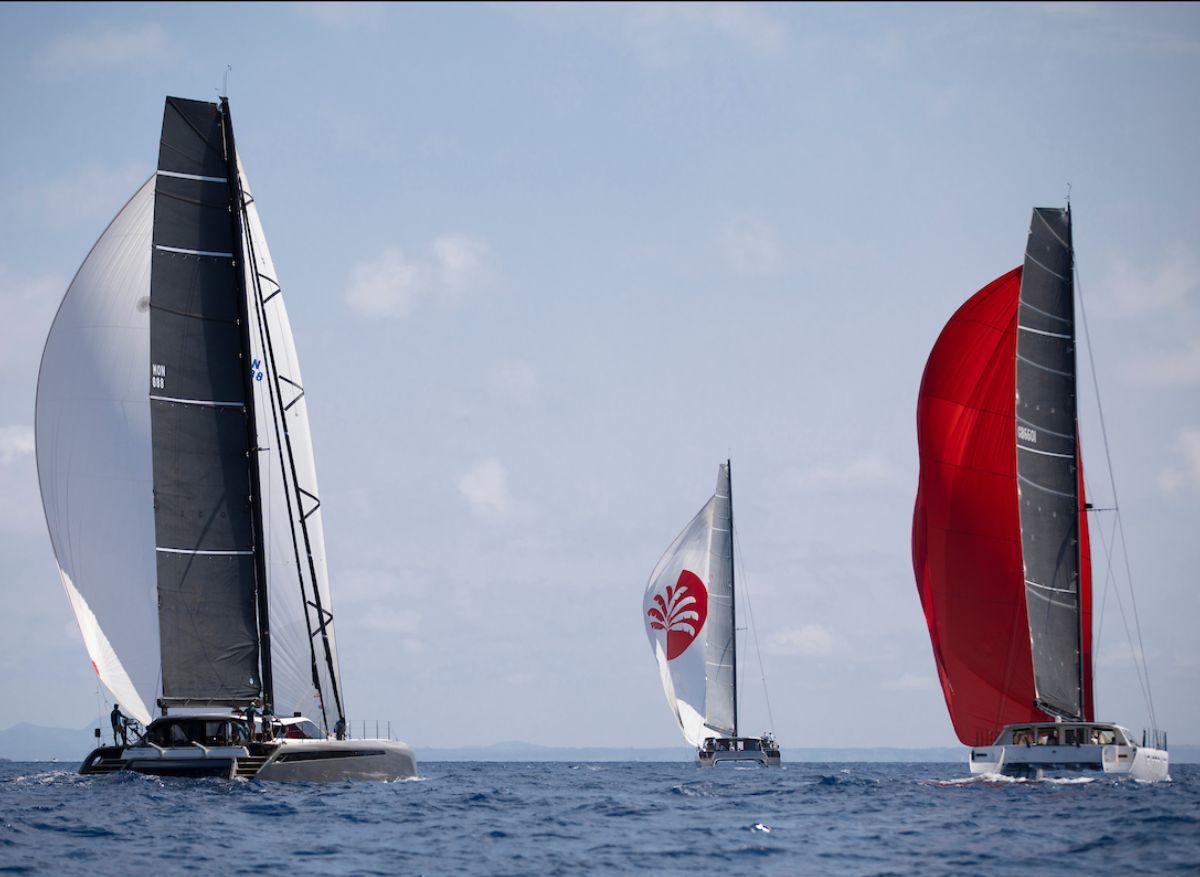 Multihull Cup off to a flying start

The 2021 Multihull Cup got off to a flying start today, with the competitive fleet of state-of-the-art performance cruising cats taking on a coastal course off Mallorca’s stunning south-west coast.

Racing in near ideal conditions with a solid sailing breeze which reached 14 knots, the first race took the four-strong fleet from the start off El Toro, to a laid windward mark.

Multihull Cup first-timer Highland Fling XVII held an early advantage ahead of R-Six, a Cup regular and former champion, with Allegra and Coco de Mer opting for the left of the course on the first beat, which proved a smart move.

At the mark Allegra led followed by Coco de Mer, with Highland Fling and R-Six in hot pursuit. The fleet then headed east past Cap de Cala Figuera and into the Bay of Palma where they rounded the Ilot de Sec and turning back to the west and a racing mark off the Islas Malgrats, before the final sprint back to the finish line.

The 84’ Nigel Irens designed Allegra was able to hold her lead on the water, finishing far enough ahead of her opposition to secure the opening race win once the sophisticated ORCmh rating system was applied.

Coco de Mer was overtaken by her fellow Gunboat built rival, Highland Fling, on the final leg, but bettered her slightly longer – 66’ plays 68’ – and optimised sibling on corrected time to secure second place, with R-Six also doing enough to see her rating put her third ahead of Highland Fling in the final standings.

“We sailed a very clean race, we didn’t sail any extra miles and we always had the right sails up at the right time and we were pretty quick on the corners,” said Allegra’s tactician Paul Larsen, “so our debrief will be pretty simple – just keep on carrying on.

“We’ve got a team now that’s pretty well practiced – we’ve just come back now from 4,000 miles of sailing including the Fastnet, so there was a pretty calm attitude on the boat,” said Larsen of the crew which secured a MOCRA class win in the 695-mile Rolex Fastnet Race.

Of the Multihull Cup competition he said: “They have good teams on all the boats. With Fling we are always aware how close it can get with them so when we had the first cross ahead at the top mark it was quite comforting.

“Coco though was the surprise performer in the first part of the race, doing very well, and I don’t think any of us expected them to be that far up in the mix.”

He added: “Coco interestingly on the way back went inside El Toro – they obviously got their boards all the way up – and I didn’t even know you could go inside there.”

It was a moment – Tim Thubron, his counterpart on Coco de Mer acknowledged – that had the crew holding their breath as they took the shortcut.

“We were on a tight layline and we had a bit of a wind shift, so I asked the question if we could go inside to avoid doing two tacks to get around it, and we looked at it carefully and we had some local knowledge on board, and we decided to go for it with the boards up.

“Overall, we sailed a good race though and didn’t make any glaring mistakes. We let Highland Fling get inside us at the final mark when we got it a bit wrong, but it was really the only mistake we made around the course. Everyone is having a great time here and looking forward to the next two days of racing.”

Post-racing the focus switched to a series of COVID-regulation compliant social events centred on the atmospheric Sansibar Wine bar and restaurant in the heart of the Phillippe Starck designed Port Adriano marina, the base of the Multihull Cup.

“After everything so many people have been through over the past 18 months it is a real pleasure to be able to welcome back so many old friends and have the opportunity to make new ones here in Port Adriano,” said Multihull Cup Event Director Andrea Grimm.

“As ever, we have seen fierce but friendly racing out on the water, followed by the opportunity for owners, captains and crews to exchange war stories back on the dock.”

Grimm also added her thanks to the Multihull Cup’s partners, notably the clothing company Marinepool, which is celebrating its 30th anniversary this year, and Rigging Projects, the composite mast and rigging specialist, which has sponsored the Clean Waves refillable water station and the reusable water bottles for all competitors at the Cup, which is a registered Sailors for the Sea Clean Regatta.