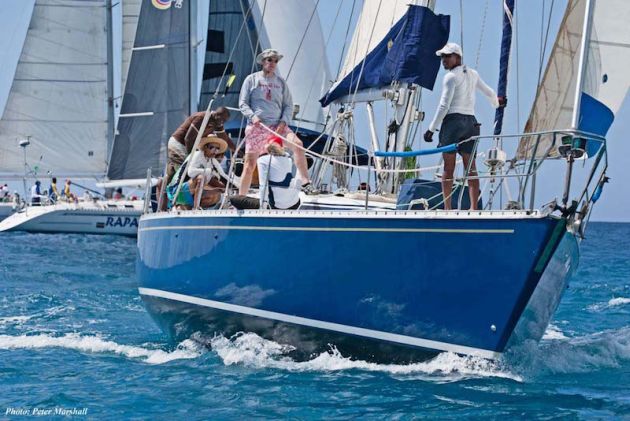 Racing at the Round Barbados Regatta. Photo Peter Marshall.

23/12/2015
Bridgetown, Barbados (22 December, 2015): As preparations to mark the 80th anniversary of the Mount Gay Round Barbados Race Series (16-24 January 2016), and to commemorate 50 years of independence for Barbados continue, islanders have welcomed the first overseas race teams into Bridgetown.
The 33m Brigantine – Tres Hombres – and her team of loyal supporters to the event were first to moor up in the Shallow Draft harbour, but so far the biggest head-turner is the MOD70 trimaran – MS Barbados (Concise 10). Ned Collier Wakefield and team arrived last week from Grenada, having just completed the RORC Transatlantic Race. The multihull is a now moored up in the Careenage in the centre of Bridgetown and is already proving to be a huge attraction.
The success of the event’s re-launch two years ago, where a new race format and more record-breaking opportunities were introduced, this Caribbean season opening regatta, organised by Barbados Cruising Club in association with Barbados Tourism Marketing Inc and Mount Gay, is starting to attract quality international entries to add to its already competitive local fleet. To support growing interest in the event and to accommodate visitors, a new 34-berth marina, with immigration clearance facilities, has just been completed in an area known as the Shallow Draft.
Other exciting entries lined up to take part in the 2016 event include fellow RORC Transatlantic Race competitors MOD70, Phaedo3 and Ms Barbados Concise 8 (Class 40), plus a host of other top class racing machines including Maximizer (Farr 72), Spirit of Juno (Farr 65), and Good Job Guy (Wally 60).
Clint Brooks and team on the TP52 Conviction representing the Barbados Offshore Sailing Syndicate (BOSS) have also signed up and are looking to defend the 60ft and Under Monohull Round Barbados record they established at the 2015 regatta.
While the out-and-out racing machines and local one-designs including the healthy fleet of J/24s, cruisers, and charter yachts, are expected to make up the bulk of the fleet for the Mount Gay Round Barbados Series, there’ll be a fine sprinkling of classics including Matt Barker’s pretty Alfred Mylne 65 The Blue Peter.
The charter option for the Mount Gay Round Barbados Race Series is a popular choice for last minute sunseekers. So far there are 14 charter company options available including OnDeck, Stormforce Coaching, Performance Yacht Charter, Regatta Charters Pro, Sailing Adventure, Team
Miramar Sailing, Rumline Sailing St Lucia plus a host of individual charter yachts spaces on offer. There is a huge choice of yachts to choose from including Scarlet Oyster (Oyster 48), Maximizer (Farr 72), BOSS Barbados/Conviction (TP52), Spirit of Adventure (VO60), The Blue Peter (Alfred Mylne 65) and Northern Child (Swan 51). Click here for full list/details of charter options available.
At the 2016 event, competitors can expect three days of coastal racing, the Mount Gay Rum Round Barbados Race (the headline event), and the chance to contest a final 300-mile Ocean Race to Antigua to tie up with the Superyacht Challenge. Plus, of course, the legendary, Bajan rum-fuelled hospitality, which this year includes a midweek party at the nearby Mount Gay Rum distillery.
On the subject of rum, one of the biggest attractions to the event other than the fantastic sailing conditions and warm hospitality, is the opportunity for race teams to win their skipper’s weight in Mount Gay Rum as a prize for the fastest time if any of the 14 Mount Gay Rum Round Barbados Race records are broken. At the 2015 event, three teams went home with a total of 78 cases of Mount Gay Rum. The outright monohull record round the island of Barbados remains in the hands of Andy Budgen and team on the British VO70 Monster Project who set a time of 4 hours 42 minutes 28 seconds in 2014.
For further information and details on how to enter click here or contact Alene, the Event Manager, at alene@barbadoscruisingclub.org.
Report written by Sue Pelling.