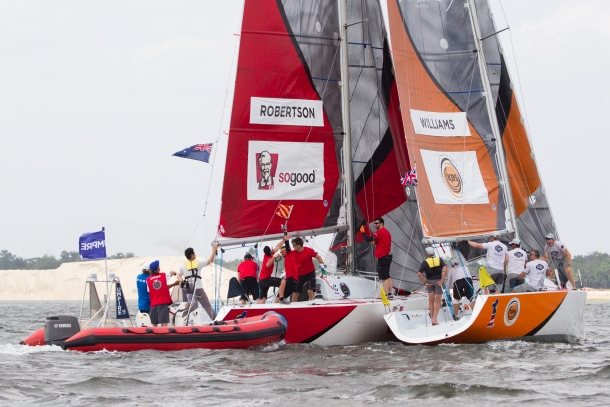 Pierre-Antoine Morvan’s Vannes Agglo Sailing Team are making the most of their Wild Card entry to the Monsoon Cup Malaysia, winning all three of their matches on day one of the concluding event of the 2014 Alpari World Match Racing Tour. Reigning World Champion Taylor Canfield and US One also took three wins from three, but Morvan’s performance is the greater surprise.

The French skipper is no longer full-time match racing, having recently taken a job as a sailmaker, but the muscle memory and tactical judgement are still there. Asked at the press conference if he expected to be winning all his matches today, Morvan replied simply: “Yes! That’s what we come here to do!” He elaborated afterwards: “We got the invite at the last moment, and I asked my crew if we wanted to come here. Everyone did, so here we are, sailing for pleasure,” said Morvan.

As to whether he can maintain the same relaxed mentality further into the competition? “If we can get into the top eight, for sure it will be harder. But we are enjoying it in this new venue. Today the wind was very good and the sailing area very good too. It was shifty, yes, but it was shifty for both boats! Beating Eric Monnin was our best win. He was ahead, but we took a good right shift at the top of the second windward leg and managed to overtake.”

Although Morvan and Canfield have perfect scores after day one, top of the leaderboard – due to having raced more matches – is Ian Williams, so often the winner of the Qualifying stage of these Tour events. “Very happy to have got five wins on the board,” said the GAC Pindar skipper in search of a record fifth world title. “Disappointed with the loss against Phil Robertson, but if we can keep those ratios we’ll do well here.”

Winner of the last Monsoon Cup, Robertson said the nature of the wind shifts made it likely for big splits to develop between boats on the race course. In his match against Canfield, the WAKA Racing skipper scored a penalty against the World Champion and came off the line in good shape. However, the US One skipper hooked into a good seam of breeze, got ahead of Robertson and sailed away from the Kiwi team, giving himself the necessary gap to unwind the penalty at the finish line. Robertson said this could have a significant effect on the 12 teams’ tactical approach to the racing. “With the race track here, you're not going to see much typical match racing. We're probably going to see people sail off into different corners, crossing their fingers and hoping it will go their way.”

Robertson may not have closed out the win against Canfield, but he did prevail in his match against Williams, something that the Kiwi is making a good habit of doing after beating the GAC Pindar skipper in the final of the previous Monsoon Cup. Event commentator Tucker Thompson has labelled Robertson as ‘The Spoiler’, believing that the WAKA Racing boys are showing the mettle to own the Monsoon Cup once again. While a lacklustre season has put the world title out of Robertson’s reach, a huge prize purse of MYR 1,475,000 (US$412,760) provides plenty of incentive, with the winner set to receive MYR 310,000 (US$86,750).

Although it’s looking unlikely that either of the local teams, skippered by Koo and Soh, will make their way into the big prize money, both skippers are revelling in the opportunity to compete against the best in the world. “For sure it will help raise the standard of match racing in Asia,” said Soh. “You learn so much from racing at an event like the Monsoon Cup.”

The Singapore skipper has also benefited from some coaching by one of the other competitors, Mathieu Richard. However there were no special favours for Richard’s protegé today. “He smashed us,” laughed Soh. Not that Richard’s day was blemish-free either. He won two of his matches, but the other one against Keith Swinton was a battle that he probably should have won, but didn’t. “Ooops! It was a comfortable lead until the spinnaker halyard came undone, and the spinnaker fell in the water. The boys rehoisted very quickly, but it made the match a lot closer, and gave Keith the chance to beat us. Well done to him.”