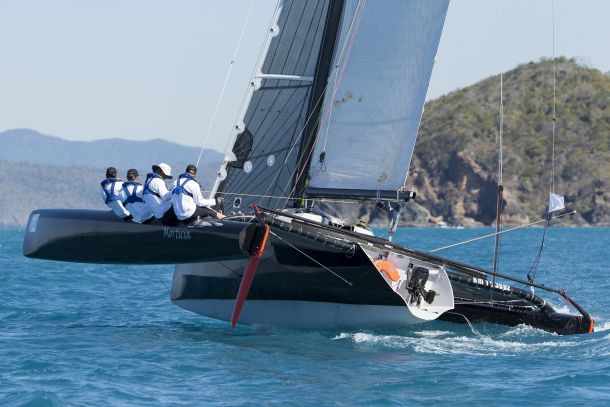 Morticia on the race track today

Multihull favourite, Shaun Carroll’s Morticia is holding onto her lead at Airlie Beach Race Week and has firmed as odds on favourite to take the title at Whitsunday Sailing Club’s annual regatta.

Sailing a Passage Race from Pioneer Bay to Grassy Island return, Voodoo beat Morticia to the post by just over two minutes once the handicaps were applied. However, following her win of yesterday, Morticia leads the series by one point, with Mojo second and Andrew Stransky’s Fantasia in third.

The fleet started in light air just after 11.00am.

“Instead of sailing the rating game, which we normally do, we’ve set Morticia up to sail overseas at St Barts and at St Maarten Heineken Week – a few regattas in the med over an 18 month to two year period,” Williams said this afternoon.

“Our rating has gone from 983 to 1012 and we’re throwing as much horsepower as we can at the boat to be competitive on the world stage,” the Sydney sailor said.

Williams has been steering the boat for two years now, but says he is still at novice at multihulls. Nor did he expect them to win here, given the modifications to the boat that have affected its handicap.

“We didn’t expect to win here, because we are trying to learn to sail the boat again, we are learning from scratch, it is such a different boat,” he said.

Carroll, Williams and the crew will likely leave for the Med after the Pittwater to Coffs Harbour Race in January.

“It will likely be our last Australian regatta. When we return, Shaun and I will be doing the next Melbourne-Osaka double-handed race – the first time they have included multihulls,” Williams said.

Back on Airlie Beach Race Week, Williams said they had a good day yesterday, but things got off on a bad footing today.

“I stuffed up the start, got there a bit late and with the tide going out, crossed the line early, so had to go around the pin and re-start. We fought back well, but the pre-start was an ‘oh dear’,” he said.

His tip on who will win here at Airlie Beach? “It will come down to Fantasia, Mojo, Morticia and Mad Max. We’ll see what happens after two more Passage Races and a day of windward/leewards,” Williams said.

“This regatta is a good test for the boat and we once we got over the start, the team settled into the nice breeze of around 11-14 knots.”

Hosted by the Whitsunday Sailing Club, racing in the ‘Tropical Festival of Sailing’ continues tomorrow from 11.00am.