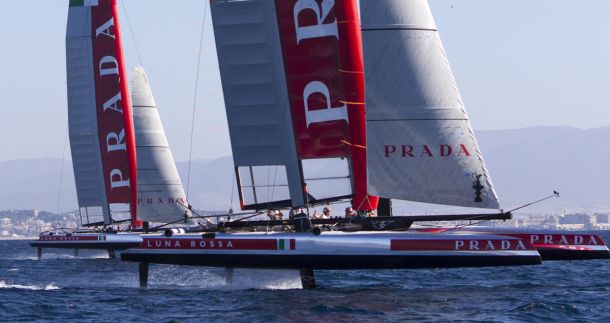 The tail is certainly wagging the dog in the America's Cup right now. It seems Team New Zealand is unable to control their Italian partners, with more information leaked by the Challenger of Record, as this report from Stuff.co.nz shows:

America's Cup leaks keep coming via the Italian media with the latest report suggesting a stronger profile for Prada at the next event as they get set to replace long-term sponsor Louis Vuitton.

Italian yachting site Vela also suggests that Emirates Team New Zealand will release the 2021 Cup protocol in Auckland on September 29, which is line with the planning already announced by the holders.

Glamour Italian fashion house Prada are the backers of Italian syndicate Luna Rossa who are the challenger of record, working in tandem with Team New Zealand to shape the new rules and class for yacht for the 36th editon of the Cup to be sailed in Auckland.

The challenger series will reportedly be renamed the Prada Cup with the winner of that going on to face the Kiwis in the match for the America's Cup.

Team New Zealand CEO, Grant Dalton has also confirmed that the protocol will demand a return to grinders instead of the cyclors his team used to win the Cup in Bermuda:

Dalton confirms cyclors out for 2021