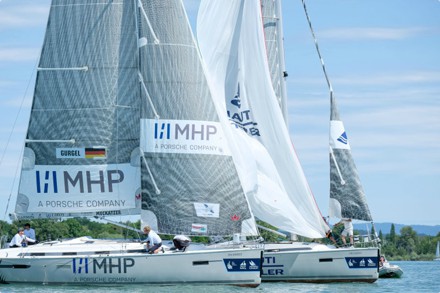 Langenargen: Match Race German is entering a decisive phase; the quarter finals for the best eight of the preliminary round were started in the afternoon when two-time Match Race Germany winner and defending champion, Eric Monnin and his Capvis Swiss Match Race Team won the first two duels against Lukasz Wosinski and his Polish HRM Racing Team.

But what seemed clear on the water, Monnin described as a tough piece of work: “It was critical for us in the early stages of both races. We went up to the first turning mark head to head. In both races, our opponents have been slightly ahead of us for a short period of time.

“My crew did a super job and trimmed the boat really well to gain the needed advantage.”

The second quarter final encounter between the qualification round’s runner-up Will Boulden from Australia (Alpha Racing Team) on the one hand, and the Slovenian Dejan Presen (Lumba Match Race Team) on the other hand, started with a surprise.

After the strong performance in the Round Robin, the crew from Down Under was the clear favourite in the duel, but the Slovenians were able to shine twice and lead this match in the mode “First to win three” by 2:0. To advance to the semi-finals, a team needs three wins in the quarter final.

The other two quarter finals provided more change, more penalties and a more balanced outcome. The encounter between the New Zealander Nick Egnot-Johnson (Knots Racing) and Emil Kjaer (Sownhill Sailing Team) ended 1:1 and will be continued on Sunday morning.

In a race that had to be cancelled before the finish due to the lack of wind, Kjaer received two penalties. It did not stop the young helmsman and his crew from constantly attacking the Kiwis.

After racing, Emil Kjaer said: “They were beating us all the time at the start and we were catching up all the time. In the last match we finally managed to overtake them.”

This was possible because the Danes picked the opposite side of the course without the Kiwis staying between them and the finishing line, not heeding the oldest rule of match racing.

The fourth quarter-final between the German skipper Max Gurgel (Team VmaxYachting) and Austria’s Max Trippolt (Team Segelmanufactur) was balanced as well. The team from Hamburg won the first start, but failed to defend the lead due to a bad jibe under attack from the Austrians, who benefitted and sailed away to victory.

In the second match the Germans won the start again and this time focused enough to turn the early advantage into a start-finish-victory.

Gurgel said: “Our second start was perfect. We knew that winning the right side would mean winning the start. This is normally is a solid base to also win the race in very light winds like today.”

This quarter final will be continued on Sunday morning at the score of 1:1.

Match Race Germany ends on Whit Monday with the Grand and Petite Final and the public press conference, followed by champagne and the prizegiving for the winners.