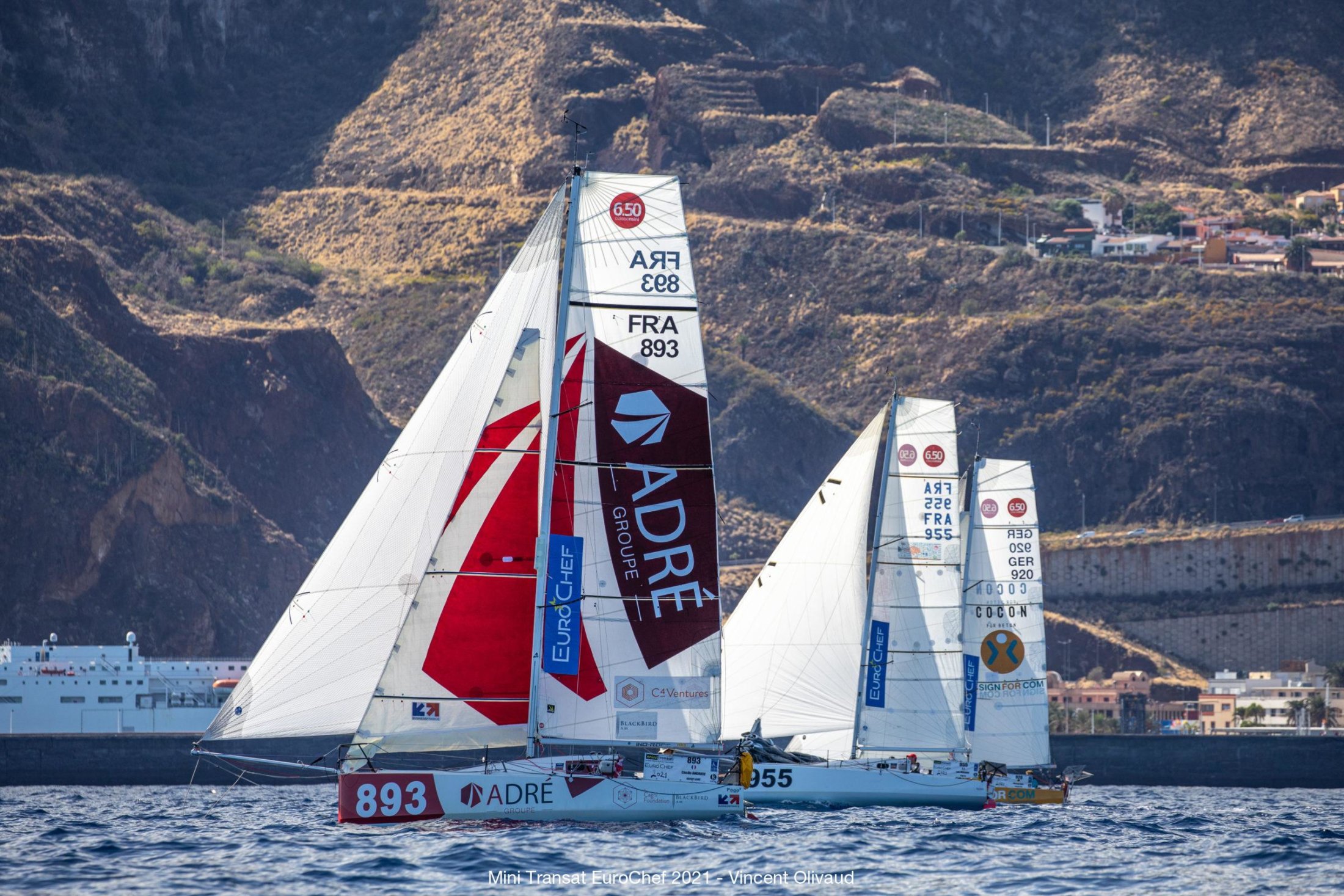 The leaderboard is still open to change for the second leg of the 2021 Mini Transat. Pic - Mini Transat / Vincent Olivaud / Alexis Courcoux

Right now, it is anyone’s game among the 84 competitors still out on the racetrack in the 23rd edition of the Mini Transat EuroChef.

Competitors are lining themselves up as best they can in anticipation of a long band of calm conditions sprawled right across the racetrack as they attempt to make for the West Indies.

Big gaps that have opened out in the fleet’s north-south and east-west divide. The gaps have continued to increase since yesterday and will likely continue to do so over the coming days.

The reason for this is a small stationary low-pressure system lying in the middle of the Atlantic with, to its south, a band of calm conditions stretching out across over 100 miles. To avoid it, the sailors will have no other choice than to go around it, which will force them to head down to at least 20° North, which is around 150 miles north of the latitude of the Cape Verde archipelago. From there, they’ll be able to start driving westwards, an option which will finally take them much closer to the West Indies.

In the meantime, they’re trying to find the best possible compromise to gain southing whilst gradually clawing back ground in the right direction, a very fine balance which is far from easy to nail. Right now, the competitors furthest south are enjoying a slight advantage in terms of speed, but all in all, across every stage of the fleet, the competitors are powering along at an average speed of between 7.5 and 11.5 knots.

More pressure to the south
Among the prototypes, François Champion (950 – Porsche Taycan) is leading the way thanks to being positioned further over to the west than his direct rivals, which gives him the edge on the leader board. He is however making three knots less speed than the little group comprising Tanguy Bouroullec (969 – Tollec MP/Pogo), Sébastien Pebelier (787 – Décosail), Fabio Muzzolini (945 – Tartine sans Beurre) and Pierre Le Roy (1019 – TeamWork), who are sailing within sight of one another 70 miles further south and posting double-figure speeds.

Gambling on a vein of breeze to the north
So, who has the edge? We should get some kind of answer in 24 to 36 hours’ time. However, we’ll have to wait a little longer to find out whether those on a southern option or those on a direct course will score most points. Elsewhere, close to the great circle route, Australian Christiaan Durrant (1015 – Little Rippa) as well as Victor Eonnet (525 – Fondation Arthritis – Amiens Naturellement) and Antoine Bos (825 – Rhino) are a little less rapid than the rest of the chasing pack, but they are continuing to make headway at an average speed of over 5 knots.

The name of the game for them is to tick off as many miles as possible now, because in four or five days they’ll invariably begin to stumble in the calm conditions. Their mission before that point will be to try to hunt down a narrow vein of breeze in which they can continue to weave their way along towards the West Indies without stalling too much and, ideally, reap the benefits of a much more direct trajectory.

For the live map, see: https://minitransat.geovoile.com/2021/tracker/