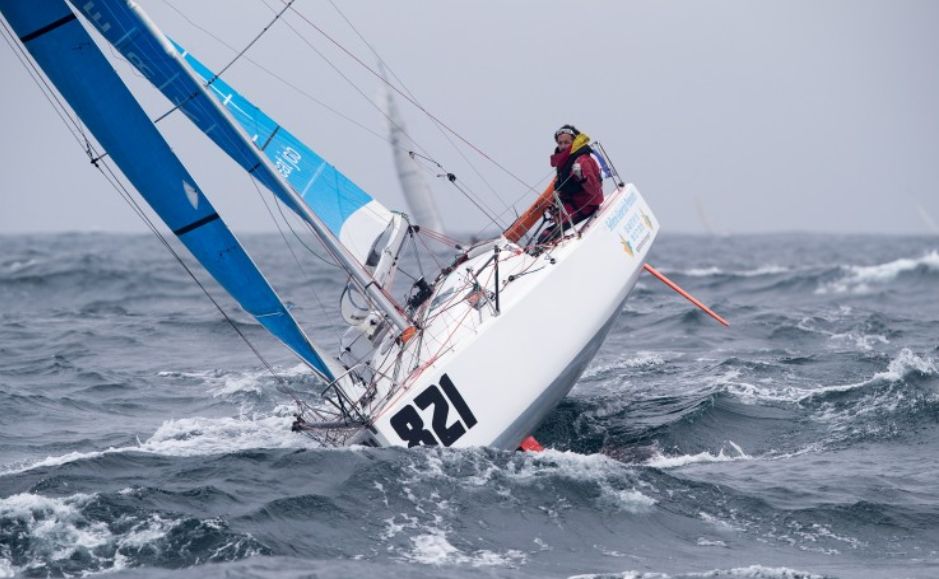 It’s in Paris, near the Place de la Bastille, that a delegation of Mini sailors agrees to meet up with the press. Objective: to talk about the race, as well as help explain the diversity of the profiles and the conviction shared by all the racers: it is its atypical character that makes the Mini-Transat la Boulangère so appealing it would seem.

Romain Bolzinger (spicee.com), Julien Bozzolo (mariole.fr), Loic Fagherazzi (Trebunnec), Marta Guemes (Artelia), Erwan Le Draoulec (Emile Henry), Ian Lipinski (griffon.fr) winner of the Mini Transat 2015 production boat category, Charlotte Méry (Femmes de Bretagne, Optigestion), Benoît Sineau (Cachaça II)and Quentin Vlamynck (Arkema 3). There were nine of them in attendance to meet the press; each carried by their own unique story and different ambitions, but all ready to vow, hand on heart, that if they are here, it’s because this race is like no other.

This is evidenced by the fact that, with just a few rare exceptions, they are all now owing something or someone just to be able to make the start line. Indeed, with an average operating budget of nearly €30,000 (not including the depreciation for the boat), they’ve had to exercise considerable ingenuity, call upon crowdfunding solutions, rally together friends and relations and tap into savings accounts.

All this they reveal without false modesty, explaining that the financial aspect wasn’t necessarily the trickiest thing to deal with. Just as difficult it would seem is convincing their nearest and dearest, sceptical sometimes, and often worried, that they simply cannot miss out on this adventure, despite it being a seemingly impossible task.

For this Mini-Transat La Boulangère, they’re obviously expecting some really thrilling rides, surfing at over 15 knots in the trade winds, sublime sunsets, starry nights and the magic of reuniting with friends and family again at the finish. However, for all these solo sailors, it’s also a way to see just what they’re capable of, set themselves fresh challenges and explore new facets of their personality whilst all alone at sea facing an inner battle. Indeed, that’s what makes the Mini-Transat, the only offshore race where the racers are not connected to the shore and where resourcefulness is everything.

Julien Bozzolo (mariole.fr), skipper of the oldest boat in the race, engineer: “My story begins by me falling head over heels in love with my boat. Once I’d bought Mariole, however much I prevaricated, I knew that it would end up with the Mini-Transat one day. And here I am.”

Romain Bolzinger (Spicee.com), skipper of a Lombard design prototype, journalist: “The idea is to juggle my race and putting together a collaborative report showcasing the essence of the Mini-Transat.”

Marta Guemes (Artelia), skipper of a Pogo 2, Spanish, engineer: “to prepare for the Mini-Transat La Boulangère, I’ve been granted leave of absence with the help of my company. Even though the race welcomes a lot of overseas sailors, the top players train in France. That’s why I’ve set up base in La Rochelle and I’m fortunate to be able to speak French well.”

Erwan Le Draoulec (Emile Henry), skipper of a Pogo 3, sailor and the youngest skipper in the race: “I’m well aware of how privileged I am. For the past two years, I’ve been training constantly and I have the support of a loyal partner and my parents. In such conditions, it’s hard not to get good results. A transatlantic crossing is something totally new for me though.”

Ian Lipinski (griffon.fr), skipper of a Raison design prototype, winner in the production boat category in 2015: “I know I’m considered to be a firm favourite in the race. It’s only logical given my results. I don’t feel any more pressure from that status. The only thing that could unsettle me is knowing that I won’t have any news from my family and my two children during the race.”

Charlotte Méry (Femmes de Bretagne, Optigestion), skipper of a Bertrand design prototype, from the Olympic network: “The look on my family’s faces when I announced I’d bought a prototype to do the Mini-Transat! Since then, I’ve really had to get myself organised: I’ve created my own company to manage the boat, but after the Mini, I’m going to have to find a profitable job…”

Benoît Sineau (Cachaça II), skipper of a Pogo 3, company manager: “I’ve been dithering over the Mini-Transat for years. I told myself that there would be something missing from my life until I did it. However, getting myself organised to delegate management of the firm for several months hasn’t been easy.”

Quentin Vlamynck (Arkema 3), skipper of a Neyhousser-design prototype, member of Team Arkema: “We’ve designed a futuristic boat in many ways. It’s down to me to make the most of it and to continue getting the machine making headway before passing over the helm to another young skipper. For my part, I fully intend to continue being part of the offshore racing scene within Lalou Roucayrol’s team, who currently keep me employed.”