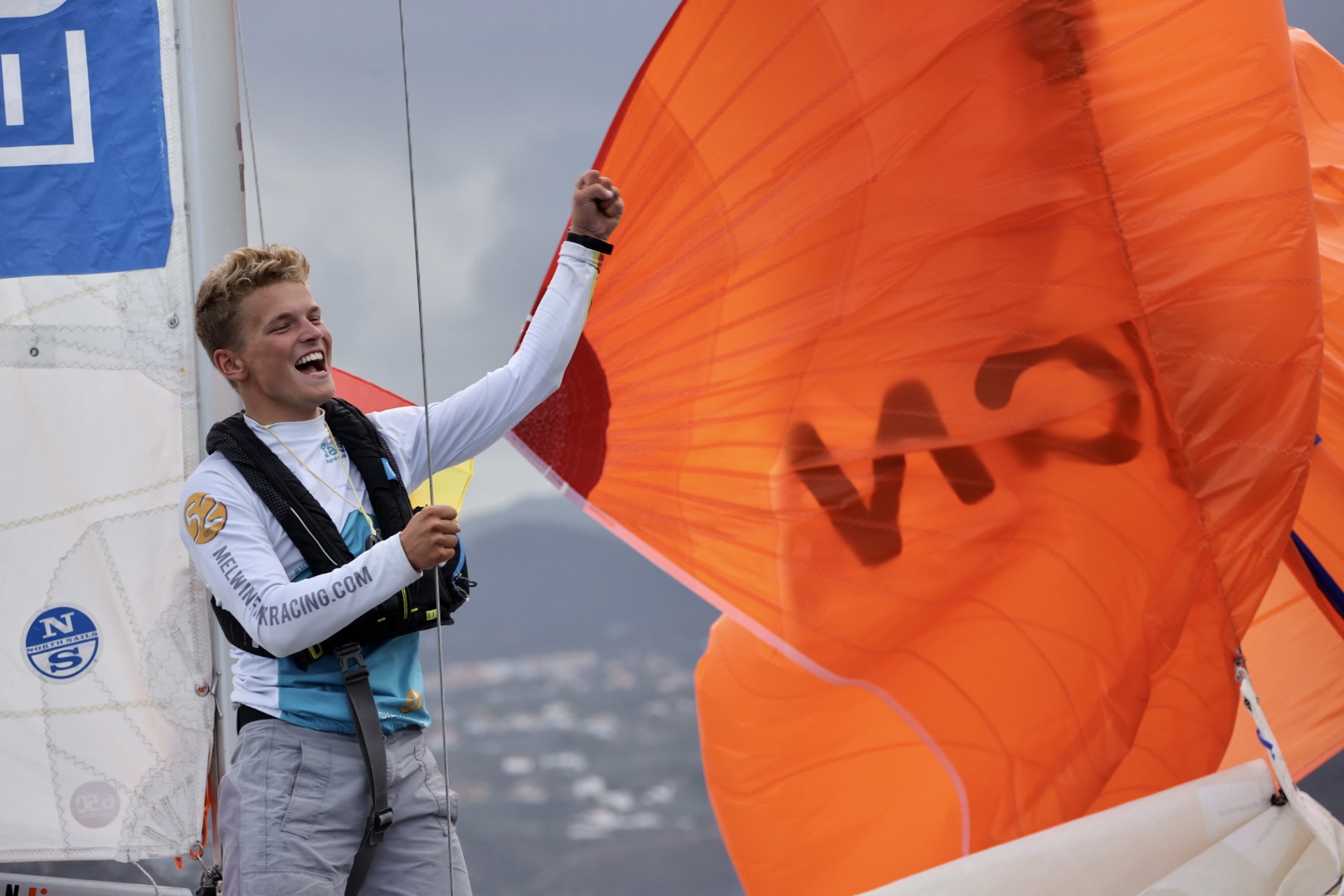 This Thursday at 15:05 UTC, Melwin Fink crossed the finish line of the first leg of the 23rd Mini Transat EuroChef, completing the 1,350-mile course from Les Sables d’Olonne to Santa Cruz de La Palma in first place among the production boats.

The skipper of the Pogo 3 flying the flag of SignForCom, moved up to the top of the fleet on October 2 at the south of Cape Finisterre. Fink was daring by continuing with his race whilst his fellow rivals collectively opted to seek shelter to avoid the passage through an active front off Galicia.

From that moment on, he managed to rack up a more than substantial lead over his rivals before sailing an outstanding trajectory to round off his race. The young German sailor, just 19-years-old, packed a real punch in this leg. Fink now has an impressive advantage over his competitors going into the next leg of the event from Santa Cruz de La Palma to Saint-François

Fink was interviewed following his win.

You are both the first German and the youngest skipper to win a leg in the Mini Transat. How are you feeling?

I don’t know how I’m feeling yet! It’s very surprising I guess. I never imagined anything like this. There was a lot of luck involved and some good decisions. Anyway, it was hard. I hesitated to go through the front. Finally, I did, and everything was fine. There was 30 knots of breeze in the front, gusting to 40 so just as indicated at the weather briefing. Finally, the first front in the Bay of Biscay was harder than the second.

Did you know or understand what was happening throughout the rest of the fleet?

After I received the weather warning, I heard chatter over the VHF, but I did not understand that some skippers talked about finding shelter for 36 hours. I thought it was far too early to think about seeking shelter at that point.  I spoke with Christian Kargl. We decided to go as far south as possible and then we could decide whether to go into harbour or not. As we were progressing, we realised that, just as it was said in the weather briefing, that the conditions south of Porto were manageable and that, as a result, there was no need to stop.

At that time, had you thought about such a scenario?

No, not at any time! It’ll be quite an advantage for the second leg, that’s for sure! It was a big decision to make but I thought about a lot. Never did I feel that I was taking serious risks. Before the second front arrived, my boat was in a perfect state, not a single damage, even after the first front in the Bay of Biscay. Thirty knots gusting forty, it’s a lot but we have tough boats. We also have various possibilities to reduce our sail area, and lots of options to secure the mast. My only worry was to see it falling because of the big waves, but everything went well.”

You made a bold move, but you also sailed very well after that, increasing your lead from 60 to over 100 miles over Austrian Christian Kargl after Madeira.

A hundred miles, really? Wow! I did not expect that gap… I sailed my own race and made the decisions that I felt like.

You seem quite intimidated?

I cannot believe what’s happening.  I was dreaming about the Top 10, but to finish in first place, 100 miles ahead of the second boat, is unbelievable! The pressure’s on now for the second leg. There should be a lot of downwind conditions so we’ll see what happens!

For the full results and to track the fleet, see: http://minitransat.geovoile.com/2021/tracker/?fbclid=IwAR22C7rYDODabWQmsUT1HPqy32UMQjVtUpghN9bFydUKbY3ifhU4rPp5-Pw