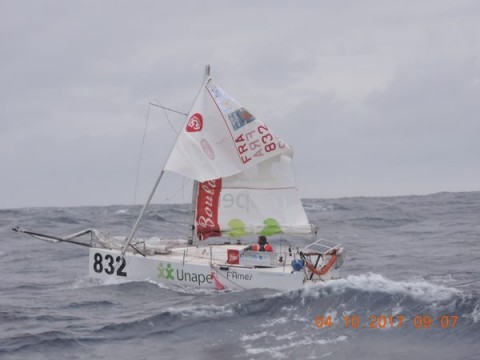 The expected north-easterly wind is now packing a punch. As a result, the Minis are once again making speeds that are more in line with their true potential as they plunge southwards. Though the majority of the fleet has opted to pass between the TSS of Cape Finisterre and the Spanish coast, a few of the skippers have chosen to take the long route, making westing as a possible investment for the future perhaps…

In offshore racing, there are times when you have to bite the bullet and suffer some losses in order to come back stronger and potentially take the win. This is clearly the objective of those sailors who have opted to make headway to the west around the top of the TSS of Cape Finisterre. Andrea Fornaro (Sideral) and doubtless Nolwen Cazé (Fée Rêvée) too, are likely to tumble down the rankings the further they distance themselves from the direct route. However, in doing so, they’re almost certain to benefit from strong downwind conditions for two days.

The NE’ly breeze currently dictating play is fuelled by a relatively small low located to the SE of Porto. With the wind rotating anticlockwise around the centre of the low pressure system, the solo sailors will have this to contend with whilst they remain to the NW of the low. However, the system is supposed to gradually move offshore. As such, the further out to sea it gets, any boats in the vicinity will logically see the winds progressively shift round to the SE or even due south. By gaining headway to the west, this fate is delayed somewhat. However, will the long detour chosen by Andrea and some of the others be rewarded by much greater speeds and if so, will it ultimately be enough to steal a march on those taking the inside track, who will inevitably be seeking to gain ground to the west themselves the moment they get clear of the TSS…?

Back to current affairs

The return of the breeze has enabled some of sailors to get back on track. In the prototype category, Ian Lipinski (Griffon.fr) is continuing to open up his lead, his pursuers resigning themselves to following in his wake for now. Some have benefited from more boisterous conditions to up their game, including Simon Koster (Eight Cube Sersa), who has managed to punch through the leading pack to make his way right up to the front again. In the production boat category, Rémi Aubrun (Alternative Sailing – Constructions du Belon) is driving the point home, Yannick Le Clech (Draoulec) and Erwan Le Draoulec (Emile Henry) now relegated to nearly five miles off the pace of the leader. Some of the heavyweights are making the most of these conditions to make up for a rather lacklustre start, as is the case for Tanguy Bouroullec (CERFRANCE – Kerhis) and the Irish skipper Thomas Dolan (Offshoresailing.fr) who has come from the very rear of the fleet and is now right back in contention again in 14th place.

The return of the breeze from the north-east has swept away the last of the clouds from above the fleet and the Minis are now belting along under blue skies along the coast of Galicia, with the Galician mountains and its forests of eucalyptus forming a wonderful backdrop, complemented by the rise in temperature. It doesn’t take much more to inspire solo sailors, who will doubtless be delighted to escape the rather moist conditions of the first two days. The only real difficulty is deciding which sail configuration to carry. Most frequently it’s a reefed main, whilst the more daring are still under spinnaker and some are opting instead for the more manageable code 5, which may well be the perfect sail when you want to make headway under autopilot and use the time to sleep and eat and recover your strength. However, in 20-25 knots of breeze, the slightest error can prove very costly. In addition to the two dismastings, several competitors admitted to a few issues. Antoine Cornic (Destination Île de Ré) has eased off the pace after broaching under spinnaker. Suffering from autopilot worries, he’s opted to calm things down and get some restorative sleep. Meantime, Andrea Pendibene (Pegaso Marine Militare) has snapped his masthead halyard, but has already found an alternative solution. Cédric Faron (Marine Nationale) has lost one of his solar panels and will have to be careful not to waste any energy. Sailing close to the coast also comes with some risk. Germain Kerlévéo (Astrolabe Expéditions- Ideesgestion.com) got his keel hooked around a poorly marked fishing pot and spent some considerable time in reverse to get free of it.

Of the 81 candidates who set sail on this adventure, these minor incidents are but the froth of all the emotions; the pleasure of finally being at sea, alone, up against no-one but yourself. Added to that, this first leg is the introduction to the main event: the Atlantic crossing. What the racers don’t tell us about are the VHF conversations from boat to boat, where they encourage each other, tease one another sometimes and chat about minor things like the contents of lunch, or how full-on a particular manœuvre was. They’re not necessarily battling to be top of the class, but they are equally indispensable in the story that is the Mini-Transat La Boulangère. That’s why they all want to get as far as they can go on this adventure. Frédéric Guérin (les-amis.fun) and Julien Mizrachi (UNAPEI) still have the right to dream, despite suffering a dismasting. Making landfall in La Coruña, they’ll have 72 hours to effect repairs and head back out to sea according to the rules. It would come as no surprise if the informal community of past Mini sailors has already found some worthy representatives to give them a helping hand. It’ll be a different kind of race from that point, but one that deserves just as much respect.