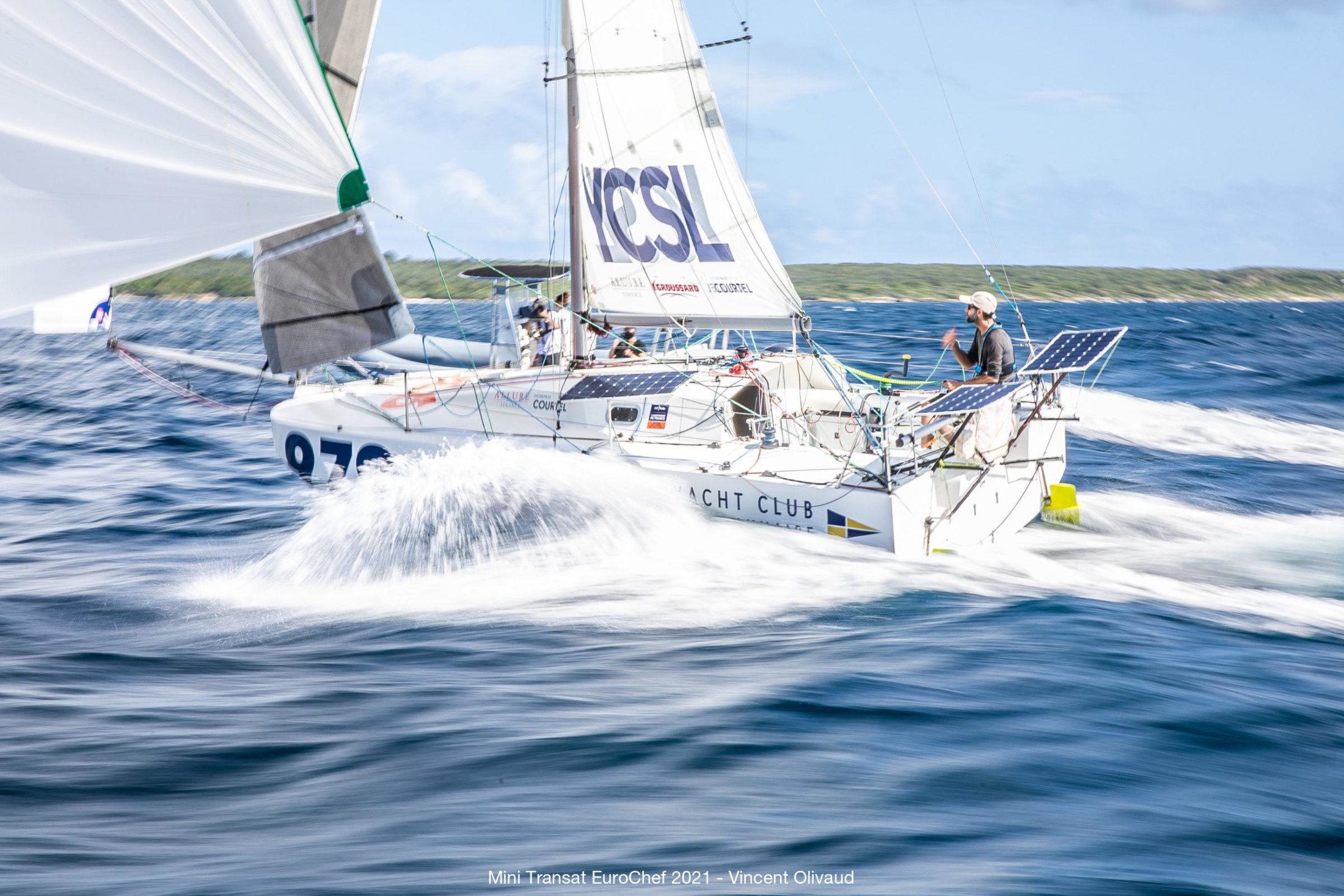 Rarely in the history of the Mini Transat has it been so tight among the production boats.

Indeed, right to the last minute, a large proportion of the fleet were embroiled in a close-contact race and (virtually) all the way to the wire, the top trio spots (prior to the jury’s decision) were up for grabs. Demonstrating real panache, Hugo Dhallenne certainly packed a powerful punch by finishing second and first in the two legs.

The second and third spots however, were very hotly contested. Ultimately, following a period of unbearable suspense, Italian Alberto Riva (993 – EdiliziAcrobatica) and German Melwin Fink (920 – SignForCom) completed the podium for the production boats in the 23rd edition of the Mini Transat EuroChef.

Demonstrating impressive control during the first leg, Hugo Dhallenne confirmed his ranking as race favourite during the second. And yet things had got off to a rather lacklustre start thanks to a westerly option, which very quickly turned chaotic. “When we realised that it was working to the south, that kind of poured cold water on our efforts. It was important to remain mentally strong. On a personal level, I admit that I really cracked, but then I decided to cross the racetrack and head south.

“The snag was that once I got there, the trade wind had literally disappeared. That was another real let-down but I dug deep. I gave, gave and gave to the last,” commented the sailor from the Ille-et-Vilaine department in northern Brittany. Despite having racked up a deficit of nearly 120 miles and consequently tumbling to 38th place in the position report on the ninth day of racing, Dhallenne began a herculean effort to claw back miles in relation to his rivals. This eventually culminated in a resounding comeback to snatch first place some 350 miles from the finish in Guadeloupe.

“I slept for 20-minute chunks between 10:00 and 14:00 hours each day, when the sun was at its hottest. During the last two days, I only slept for two 30-minutes chunks. I really spared myself no pains. I gave, gave, gave”, said the skipper of the Maxi 6.50 in the colours of the Yacht Club de Saint-Lunaire. He even said before the start that success in an event like the Mini Transat would be the result of going fast the whole time and that you had to be mentally strong; qualities he absolutely nailed.

“There’s not a lot to say about Hugo’s victory. He won and he more than deserves his place,” said Alberto Riva. “He made a blistering comeback from out of nowhere after lamenting a considerable deficit at the midway mark and above all considerably extending his route. He certainly pushed all of us to our limits.

“On a personal level, when I saw him picking off his rivals every day in the ranking, I wondered how he was doing it and I must say it was a real nightmare, especially at the end when he overtook me less than 48 hours from the finish.”

Riva was blown away by the hellish pace maintained by his rival over the theoretical 2,700 miles of the course. Naturally, he was also happy to finish in second place in the event after an 11th place in the first leg. “It’s a lovely surprise. I’m very happy with this place, but above all I’m happy to have crossed the Atlantic. It’s been an incredible experience,” added the Italian sailor, confirming his status as the strongman of the Mini 6.50 circuit, after his flawless performance in the Puru Challenge Race back in August.

Though Riva and Dhallenne were favourites for the crown in this event, the great surprise has to be Melwin Fink. The youngest sailor in the race at all of 19 years old, he made quite an impression in the event by securing the win after the 1,350-mile leg between Les Sables d’Olonne and Santa Cruz de La Palma.

A leg punctuated by a stopover in Galicia, protests and a 24-hour reduction in the race time for the vast majority of the competitors, as awarded by the international jury, which inevitably left its mark upon the hierarchy and the competitive hopes of some of the fleet.

The upshot of this for the young German was a 1 hour 52 minute lead over the second boat and a 13-hour advantage over the rest of his competition before linking onto the serious part of the Atlantic passage. That’s a little and a lot on a transatlantic scale. Inevitably, when going for the westerly option, a move mirrored by the vast majority of the circuit’s musclemen and women, he quickly understood that his lead was crumbling away.

“I made a lot of mistakes,” said Fink. “The weather was pretty complicated and I didn’t sail the perfect race on a strategic level. I headed west when I should have favoured the south. Mentally, that was a low punch. I didn’t think I’d manage to salvage a podium place. I was convinced I would finish seventh, eighth or ninth when I crossed the finish line. Obviously, I’m very happy with my place!”

It really was a close call though because in the end he finished just 16 minutes ahead of Léo Debiesse (966 – Les Alphas) in the overall ranking. A derisory figure after a total of over 26 days of racing. A real sport, the latter skipper, who’d spent nearly the whole night, watch in hand with the hope of snatching third place, before seeing Melwin appearing over the horizon a little earlier than he would have liked, came over to greet and congratulate his rival. Proof, if it were needed, that the Mini spirit is alive and kicking and that the race always has its share of surprises in store.