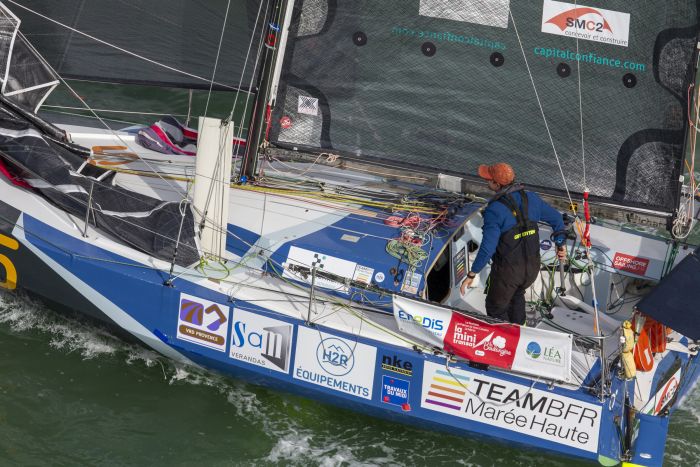 François Jambou is this morning less than 500 miles from the finish in Le Marin in Martinique. As such, the leader in the prototype category now has a glimpse of what looks set to be a victorious finish within the next two days.

A little over 100 miles astern, Ambrogio Beccaria is also very well placed to take the win in the production boat category and mirror his victory in the first leg. For now though, the two leaders will have to focus on containing any attacks from their pursuers whilst preserving their gear. Such is the tough balance required in offshore racing.

The battle for the remaining podium places is still just as intense and further back the list of damage is mounting. Two competitors, Irina Gracheva and Julien Berthélémé, are sailing under jury rig, whilst many others are having to try to make repairs at sea in order to hang on in there until they make it to the other side.

Prototypes: the fast track to victory for François Jambou?

With a lead of nearly 100 miles over Axel Tréhin (945) with less than 500 miles to go, François Jambou (965) looks poised to secure outright victory. Indeed, it’s worth noting that the separation between the two men was just six minutes (in Axel’s favour) at the end of the first leg.

Erwan Le Méné (800) looks firmly settled into 3rd place. Will he be able to make up the deficit he amassed in the first leg to move up onto the podium in the overall ranking? Erwan lamented a deficit of five hours in relation to Tanguy Bouroullec (969) on setting sail from Las Palmas de Gran Canaria and this morning Tanguy has been relegated to over 50 miles astern of Erwan.

The fleet of prototypes stretches nearly 800 miles between François Jambou and Marie Gendron (930), in 20th.

Production boats: The fleet is split into three large groups

In the production boat fleet, three large groups have formed. The first comprises leader Ambrogio Beccaria (943) and his closest pursuers. Lined up behind the untouchable Italian, Benjamin Ferré (902) and Nicolas D’Estais (905) are virtually neck and neck, closely followed by Félix de Navacelle (916), positioned slightly to the North. Lauris Noslier (893) is also attacking hard to the South.

Given the easing weather conditions announced for the coming days and his slight deficit in relation to this group, Lauris certainly has nothing to lose by giving it a shot. Interestingly, Pierre Le Roy (925), a meteorologist in civilian life, is also hedging his bets on the South. We’ll have to wait and see how the southerly option pays off.

The second group comprises those racers ranked from 7th (Guillaume Quilfen) to 15th place (Florian Quenot). Their podium hopes would seem compromised at this stage, but these nine sailors are embroiled in a fine race and are giving their all. Indeed, it’s worth giving a special mention to Amélie Grassi (944) who’s continuing to pick off her fellow competitors and is lying in 14th place this morning.

Just astern of this group, we find Kevin Bloch (697) and Violette Dorange (955) who are very much sailing their own races. Out of VHF range from their playmates, their transatlantic race will be a true rite-of-passage.

The third large group is more substantial, but also more spread out with a significant North/South separation. However, there is little between them in terms of distance to the goal. Indeed there is just 110 miles between 18th placed Benoit Formet (887) and 40th placed Mathieu Gobet (455) this Tuesday.

Even in the soft belly of the ranking, the battle is intense between sailors with a whole variety of profiles, which is all part of the charm of the Mini-Transat La Boulangère.

Irina Gracheva and Julien Berthélémé continue on their way under jury rig, while Anne Beaugé has to scale her mast

The two competitors whose boats dismasted yesterday have managed, without assistance, to set up jury rigs that should enable them to make Martinique without further incident, though they will have to be patient and sparing of their remaining food. This morning, Irina Gracheva (579) and Julien Berthélémé (742) are 1,100 miles from the finish (08:00 UTC position report).

Meantime, after breaking a spreader, Anne Beaugé (890) is planning to scale her mast to secure her rig once a support boat arrives alongside to ensure she can perform the operation in safety.