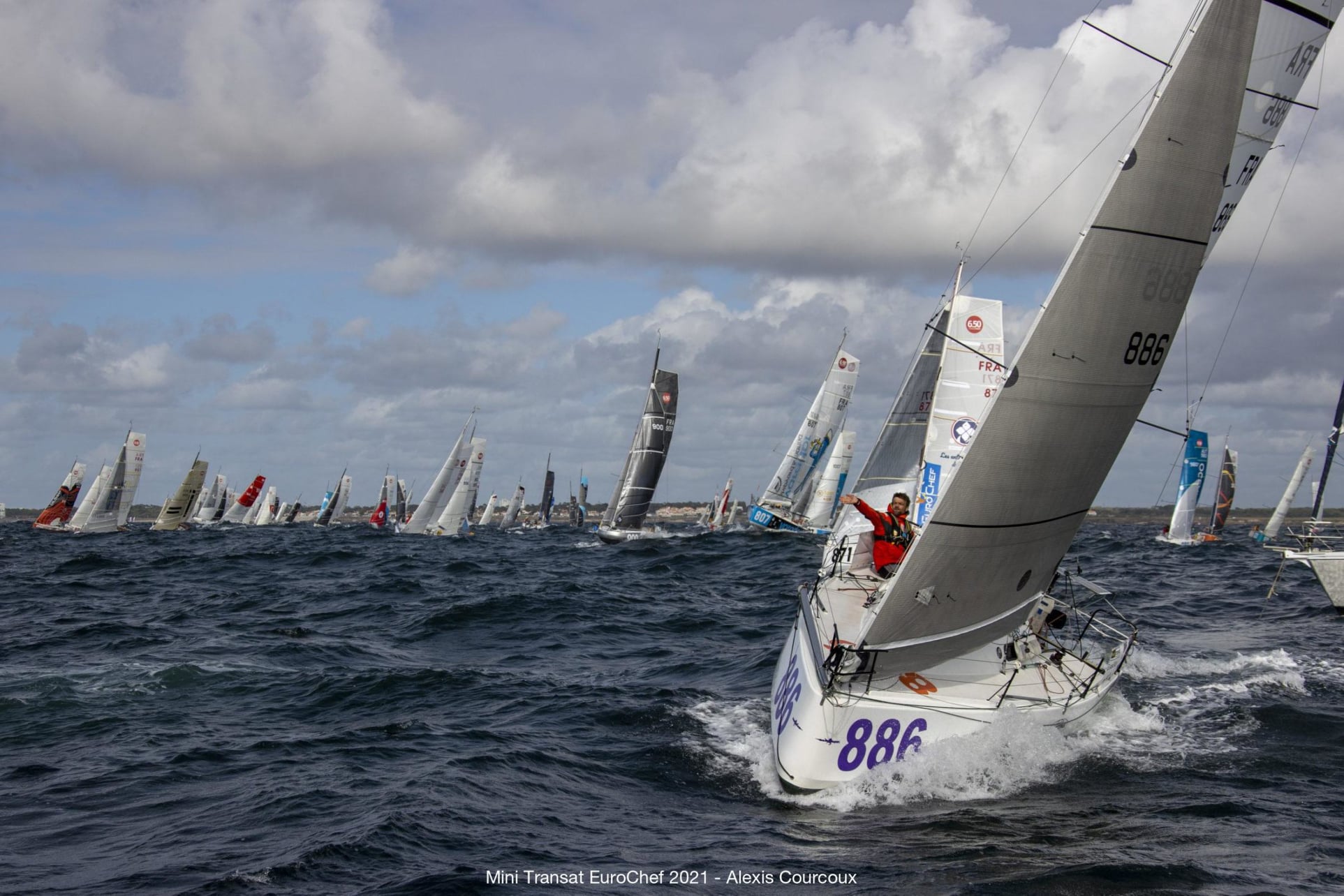 Having left Les Sables d’Olonne on Monday afternoon in 15-20 knots winds, the 90 sailors in the 23rd Mini Transat EuroChef saw the wind abate a few hours after the start as forecast.

At that point, they began weaving their way across the race zone in a bid to conserve as much speed as possible, notably avoiding a patch of light airs located in the south of the Bay of Biscay. Now everyone remains relatively bunched as they seek to line themselves up as best they can before a front rolls through in on Wednesday. This same front might well cause some sizeable gaps to open up within the fleet.

After setting sail yesterday at 15:30 hours local time on the first leg of the event (1,350 miles between Les Sables d’Olonne and Santa Cruz de La Palma), the 90 sailors competing in the 23rd Mini Transat quickly got to the heart of the matter, the sea state notably causing some stomachs to churn the moment the skippers exited the channel from Port Olona.

Certain competitors, like Tim Darni (432 – So’Kanaa jus 100% naturel) – who also had to contend with some minor electronic issues -, and Nicolas Guibal (758 – Les œuvres de Pen Bron) are suffering from persistent seasickness, but they’re digging deep and managing to hang on in there. Indeed, they know that it generally takes about two or three days to get your sea legs.

However, the toughest part is yet to come with a front set to cross tacks with them. This will see the wind gusting to 30-35 knots with upwind conditions and cross seas. As such, the situation won’t be very pleasant or comfortable for the sailors and, with that in mind, some of them have already opted to head off on a tangent to avoid the worst of the weather by setting a course to the south.

The first to tack early on Tuesday afternoon, Franck Lauvray (346 – Alice) quickly found his option mirrored by Pierre Meilhat (485 – Le Goût de la Vie), François Champion (Porsche Taycan) and Hugo Picard (1014 – SVB Team). By Tuesday evening, it’s more than likely that the vast majority of the fleet will have followed suit, though they’ll have to be careful not to drop down too far to the south or they will find that their progress is slowed dramatically.

However  those who opt instead to head into the teeth of the front will most likely be the first to hook onto the NW’ly wind shift. The odds are that the leaders won’t think twice about it, maintaining a straight line heading. There are clearly big gains to be had by holding course, but they’ll obviously have to preserve their gear as best they can if they are to ensure they aren’t handicapped by any breakages during the next stage of the leg.

Irina Gracheva (800 – Path), France’s reigning offshore champion, is posting an impeccable performance at the head of the prototype fleet. That said, the Russian sailor is only just ahead of Tanguy Bouroullec (969 – Tollec MP/Pogo), who might soon be able to reap the benefits of his positioning further to the north of his rival.

It certainly won’t be plain sailing though as he’ll also have to watch out for Victor Turpin (850 – Pays d’Iroise), Pierre Le Roy (1019 – TeamWork), Sébastien Pebelier (787 – Decosail) and Fabio Muzzolini (945 – Tartine sans Beurre), who are all in hot pursuit, less than five miles astern of the leader and all very at ease in bracing conditions.

Among the production boats, the battle is also raging. Gaël Ledoux (886 – Haltoflame – Ilots.site) currently has the edge, but behind him the fleet is chasing hard. Georges Kick (529 – Black Mamba), the most senior sailor in this year’s event, in 65th position, is bringing up the rear with a deficit of just 14 miles. However, it may be a very different scenario in 24 hours’ time with the potential for some significant gaps to open up between the front and back of the Mini fleet.