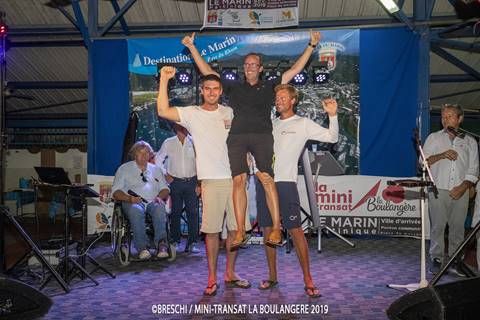 The arrival of the final competitor, Georges Kick, on Saturday night through into Sunday, marked the official closure of the finish line for this second leg of the Mini-Transat La Boulangère 2019 between Las Palmas de Gran Canaria in the Canaries and Le Marin in Martinique.

Of the 87 participants that set sail from La Rochelle, including eight women, 78 skippers completed this 22nd edition. On land, the prize-giving ceremony for the second leg took place yesterday evening in Le Marin, in the presence of the organisation, the skippers and their families, as well as the race partners, rounding off the festivities in the finish village in Le Marin.

A great vintage for the 2019 edition

Upon making landfall in Martinique yesterday, Sunday 24 November at 05 h 43 min 25 seconds UTC, Georges Kick, the last competitor in the Mini-Transat La Boulangère 2019, officially closed the finish line for this second leg. Celebrated with great pomp by all the skippers on the pontoon in Le Marin, the arrival of the oldest competitor (64 years of age) in this edition marks the end of a particularly prolific transatlantic race.

With 78 skippers having made the West Indies out of the 87 participants who set sail on 5 October 2019 from the Bassin des Chalutiers in La Rochelle, France, this 22nd edition will remain etched on the minds of all those involved as being an excellent vintage.

Only nine participants were unable to complete the adventure. Four skippers were forced to retire from the first leg between La Rochelle and Las Palmas de Gran Canaria (Jonathan Chodkiewiez, Jean-Baptiste Ternon, Yann Blondel and Czech Pavel Roubal ) and three in the second leg between Las Palmas de Gran Canaria and Le Marin (Russian Irina Gracheva, Frenchman Thomas Gaschignard and Italian Matteo Serricano). Hendrik Witzmann from the United Arab Emirates did not take the start of the second leg due to injury and Briton Joe Lacey was declared as not officially racing for having received outside assistance, but did manage to complete the course.

Jean Saucet, Technical Director of the Collectif Rochelais Mini-Transat gives us his assessment of this 22nd edition: “The Mini-Transat La Boulangère was punctuated by excellent weather. We were treated to a first leg that was just the way we like them, very varied with downwind and upwind conditions as well as calms.

“The second leg lived up to expectations with a lot of downwind sailing apart from at the end, but that spiced up the race a bit. Even though it’s always a bit annoying to sail 60 miles in 24 hours for three consecutive days, in sporting terms it was fantastic.

“The star players stepped up to the plate and didn’t break much. There’s a big difference in level between the first and last, that’s part of the event’s charm.

“There were three sailors who didn’t set sail due to injury and the other retirements were a result of technical issues. Two boats were abandoned in this second leg. It’s always distressing but in both incidents, each of the boats no longer had any form of steerage, which is the worst possible damage you can suffer.”

Never before in the history of the Mini-Transat has this happened. With no fewer than 37 finishers in the space of 24 hours, the night of Wednesday through into Thursday really made life difficult for the organisation, who had to put in place additional on-the-water support to deal with the great slew of finishers. Indeed, local volunteers really came out in force to lend the organisers a helping hand.

“It was all down to the weather because there was a vast windless zone at the finish. Boats came back from behind and everyone was glued to the spot in the same windless zone, so when the wind did kick back in very slowly, they all flooded across the finish line at the same time. As there was a period of 25 minutes for the tow from the finish line to port, it was necessary to put in place some additional on-the-water support. We were greatly assisted by the locals and by the unshakeable desire of the entire organisation team to accelerate the movement and get everyone into port as quickly as possible,” explains Jean Saucet, Technical Director of the Collectif Rochelais Mini-Transat.

Make way for the festivities

With all the skippers having arrived safely in port, the traditional prize-giving ceremony for this second leg was able to take place. From 18:00 hours local time on Sunday evening, a traditional Martinique folk group comprising musicians and dancers opened festivities. For nearly an hour, the sailors and the public who had flocked to the finish village were treated to a mesmerising spectacle to the rhythm of their drums and were then able to witness the prize-giving ceremony, which brought this 2nd leg of the Mini-Transat La Boulangère to a close.

The key figures from the Mini-Transat La Boulangère 2019

87 skippers at the start in La Rochelle including 8 women

83 skippers made the finish in Las Palmas de Gran Canaria

82 skippers at the start in Las Palmas de Gran Canaria

78 skippers at the finish in Le Marin

20 days, 20 hours, 31 minutes and 57 seconds: the accumulated time over both legs for François Jambou, winner of the Mini-Transat La Boulangère in the Prototype category.

12 days, 8 hours, 55 minutes, 3 seconds: the difference in time between the 1st prototype skipper and the last, David Krémer (time accumulated over both legs)

21 days, 21 hours, 50 minutes and 50 seconds: the accumulated race time over both legs for Ambrogio Beccaria, winner of the Mini-Transat La Boulangère in the Production category

12 days, 21 hours, 30 minutes, 5 seconds: the time difference between the 1st skipper in the Production category and the last, Louis-Xavier Lamiraud (accumulated time over both legs)

291.47 miles covered in 24hrs: record for the greatest distance covered in the Production boat category, on 5 November by Florian Quenot

18 yrs, the age of the youngest participant: Violette Dorange

64 yrs, the age of the eldest participant of this edition: Georges Kick

Reminder of the podium places for the second leg