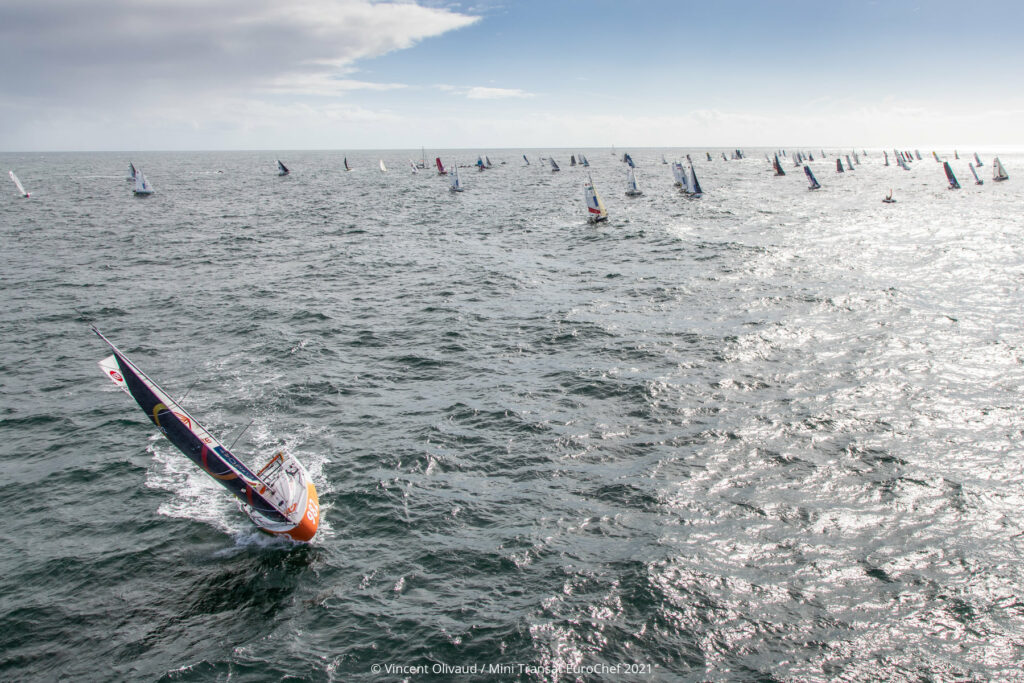 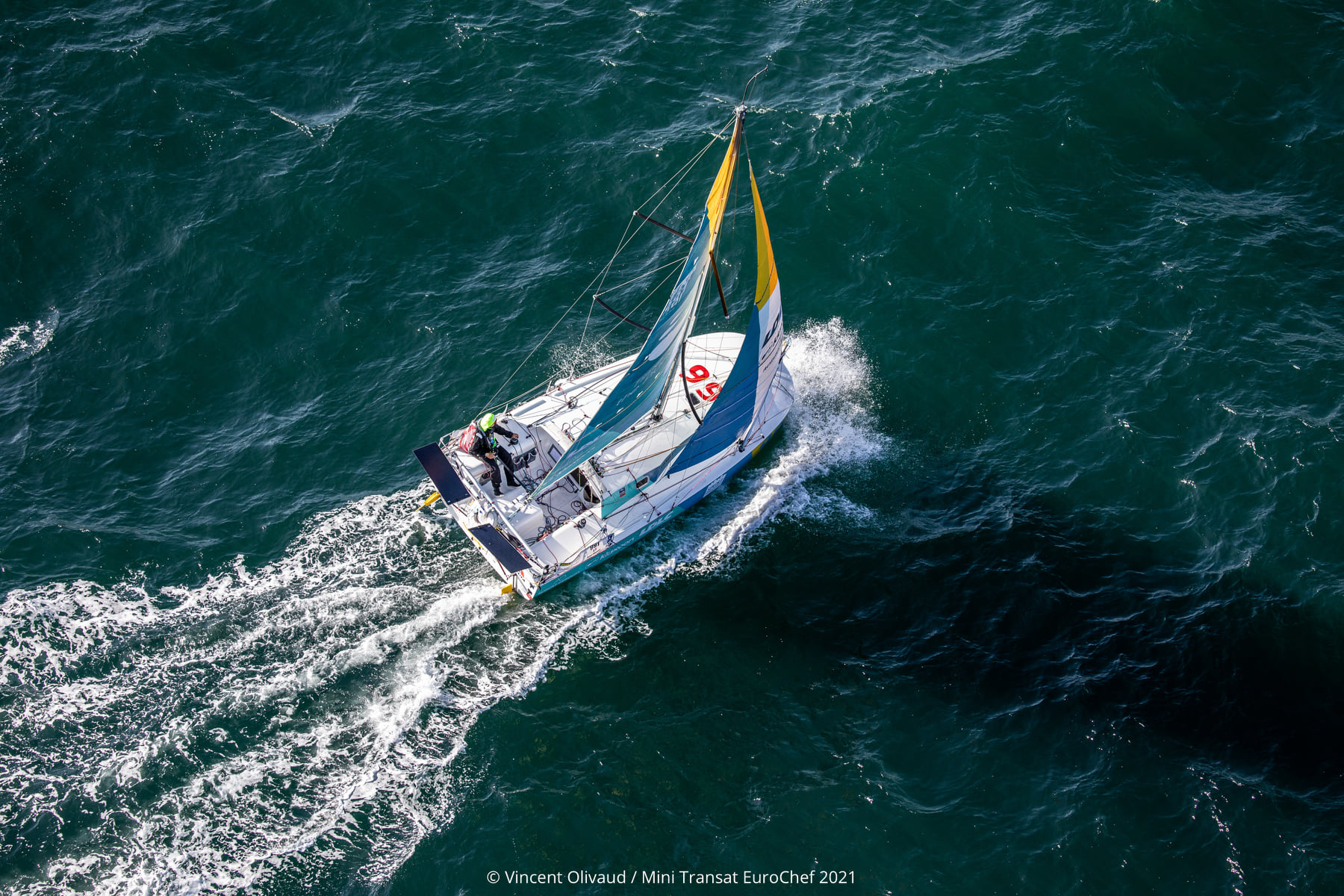 The first leg of the Mini Transat EuroChef started on Monday afternoon in France.

Propelled along by a NW’ly breeze between 16-20 knots, the 90 competitors set sail from Les Sables d’Olonne bound for Santa Cruz de La Palma, with 1,350 nautical miles to negotiate and many obstacles to overcome.

The sailors will need to quickly find their sea legs when leaving the Bay of Biscay. They’ll have to get in phase with the elements to avoid loosing ground before the passage around Cape Finisterre.

Pierre Le Roy (1019 – TeamWork), one of the firm favourites of this 23rd edition in the prototype category, said, “The negotiation of the Bay of Biscay promises to be quite complicated in terms of strategy. We’re going to have to nail the timing of our manoeuvres and be quick at it. We’re clearly going to have little time to rest until we round the north-west tip of Galicia, but it’s going to be an interesting ride. The match is going to be intriguing and above all wide open.

“That’s particularly true after the latitude of Vigo, where two different scenarios are possible today. The first might enable us to link onto a run down to the Canaries at quite a lick. The second could be a little more laborious, with a great deal of uncertainty colouring play. As a result, we’ll have to be on the pace from the get-go and not dawdle on our way to Cape Finisterre.”

The stresses of the big day were certainly palpable this morning on the Vendée Globe pontoon.

“We all made an appointment for the start some two years now. This is it, crunch time!” said Basile Bourgnon (975 – Edenred). “We’re getting to the heart of the matter now and it’s quite something. I don’t really know what that is. The crowds, the noise, the encouragement… It’s a rush of emotions. In concrete terms, it’s the start of an epic and wonderful human adventure.

We’ve all put a massive amount of time into preparing for the race, but the only thing we haven’t been able to do is to deal with the emotion of the start. One thing for sure is that we’re all excited to get going!”

This sentiment was shared by Léo Debiesse (966 – Les Alphas). “There’s excitement in the air and a little bit of apprehension too, but on a personal level I feel confident all in all. The boat is ready and the navigation has been studied. I know where I’m going. I have a very clear plan in my head. Right now, we’re going to need to find our sea legs and get into race mode as quickly as possible.”

In fact, the first 72 hours of the race are set to be fairly crucial with an easing of the breeze this evening, where sailors need to stay in front of the high pressure ridge to avoid becoming becalmed. A front is forecasted for Tuesday night, and then a wind shift to hunt down to thread their way along as smoothly as possible between Cape Finisterre and the eponymous TSS (Traffic Separation System).

Finding the right balance between preservation and speed at the appropriate times will, as ever, be one of the keys to success in this Mini Transat EuroChef. “Setting the pace at the right time is the clear instruction I’ve given myself this year. That was what was lacking for me two years ago”, says Fabio Muzzolini (945 – Tartine sans Beurre), who came sixth in 2019.

“If small gaps open up before the Cape Finisterre TSS, it’s highly likely that they’ll widen dramatically in the Portuguese trade wind. We’re going to have to be up there in the leading pack,” said the Franco-Italian sailor, who has already nailed his start, rounding the windward mark in second place behind Irina Gracheva (800 – Path) in the prototype category.

“The Mini Transat is a race against time. Beyond the ranking, which will have a part to play, the key is to arrive in the Canaries with little or no time deficit. We know that winning the first leg is never enough to win the event, however we also know that taking your time can make things complicated further down the line”, said Léo Débiesse, who is currently in hot pursuit of the trio made up of Brieuc Lebec (914 – Velotrade) – Lennart Burke (943 – Vorpommern) – Julie Simon (963 – Dynamips), who all had a great start to the race.