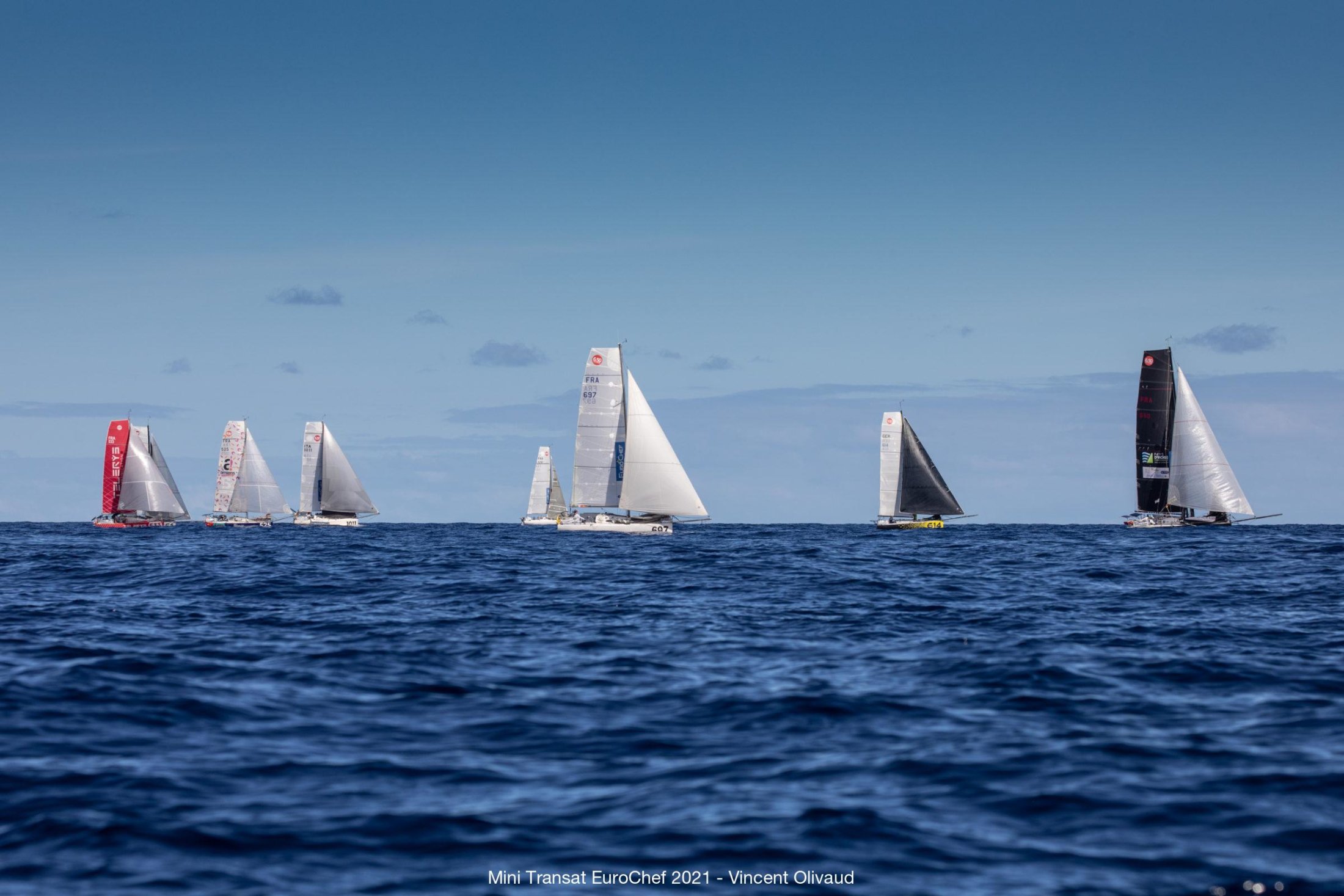 After setting sail mid-afternoon yesterday local time from Santa Cruz de La Palma, bound for Saint-François, those competing in the 23rd Mini Transat EuroChef have endured some tricky opening miles and each has had to deal with the wind shadows created by the Canary Islands, as well as numerous light patches.

Obviously, some have fared better than others at this particular game. This is evidenced by the fact that, this Saturday, after just 24 hours of racing, the fleet is already sprawled across more than 35 miles. However, the good news is that all the solo sailors have managed to extricate themselves from the Spanish archipelago and have hooked into a north-easterly breeze of around 15 knots.

The bad news is that the Spanish sailor, Pilar Pasanau (240 – Gemese – Peter Punk), the victim of autopilot issues and Tanguy Aulanier (896 – La Chaîne de l’Espoir), whose bow was seriously damaged during a collision shortly after the start, have officially had to retire from the event.

As expected, the introduction to this second leg of the race has been somewhat tricky for the 85 competitors still out on the racetrack. Amidst the wind shadows generated by the islands (especially that related to Tenerife, which culminates at 3,715 metres), as well as the weak, erratic airs and the countless light patches, the solo sailors have had to be focused and opportunistic.

At the same time, they have had to remain on top of trimming their steeds in order to weave their way along the channel between Gomera and El Hierro as swiftly as possible with the aim of gaining southing.

Though all of them have extracted themselves without ever really stalling, in the end, some have come out a lot better than others.

Among the prototypes, Fabio Muzzolini (945 – Tartine sans Beurre) has had a particularly favourable passage by sailing a blinder, thanks to a slightly more offshore route around El Hierro than his direct rivals.

This Saturday, he boasts a lead of 0.6 miles over Tanguy Bouroullec (969 – Tollec MP/Pogo), the current leader in the overall ranking, and over 2 miles ahead of the triplet formed by Irina Gracheva (800 – Path) – Sébastien Pebelier (787 – Decosail) – François Champion (950 – Porsche Taycan).

Among the production boats, Léo Debiesse, always very at ease in the light airs and transition phases, is living up to his reputation. This afternoon, the skipper of Les Alphas is powering along out front with a lead of 2.8 miles over Julie Simon (963 – Dynamips), 3.5 miles ahead of Chloé Le Bars (1007 – Association MJ pour l’Enfance) and 5 miles in front of the chasing pack.

As mentioned before, this chasing pack is stretched across more than 35 miles in length and the same laterally, with certain competitors, like Valentin Foucher (990 – Mini Chorus – CARE BTP) or Spaniard Miguel Rondon (1006 – Kristina II) opting for a different route to the east in a bid to try to make up ground lost under the influence of more wind shadows than their rivals last night.

A fruitful option? Nothing could be less certain. The reason for this is that salvation seems to be located on the other side as the wind is curving round in that area. In fact, plunging southwards certainly seems to be a guarantee of finding more pressure, but the act of repositioning yourself to the west will guarantee a shorter route.

As such, in the coming hours (from this evening onwards if all goes to plan), the Mini sailors will begin to link together a series of gybes so they can zigzag their way down the Atlantic. Appearing to be fairly simple on paper, out on the water, competitors will need to be able to exploit the numerous variations in the wind as best they can by finding the right compromise between making fast headway and not extending the distance to travel too much.

Meantime, Pilar Pasanau and Tanguy Aulanier have unfortunately very different concerns. The former, faced with autopilot issues as well as backache, decided to throw in the towel yesterday evening. The Spaniard, for whom this is her fourth participation in the event, is obviously extremely disappointed to have to cut her race short.

The same is true for the skipper of La Chaîne de l’Espoir whose Ofcet 6.50 collided with Camille Bertel’s boat (900 – Cap Ingelec) during yesterday’s start phase. His bow is seriously damaged, and though he initially attempted to effect repairs, the engineer has since been forced to face facts and has now also retired from the race.