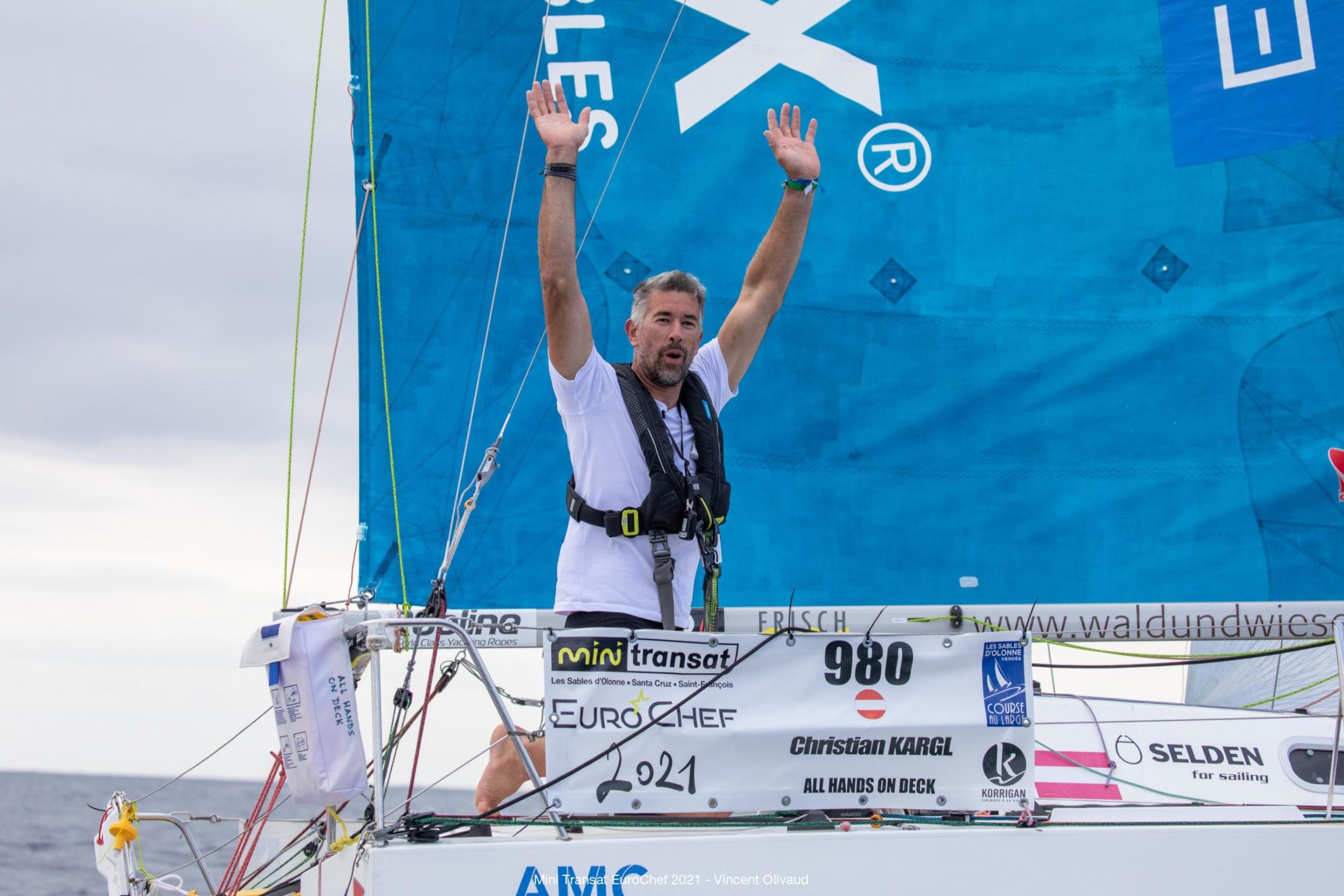 Though the top three prototypes finished within one hour and 10 minutes of one another at the end of the 1,350 nautical mile first leg in the 23rd Mini Transat EuroChef, between Les Sables d’Olonne and Santa Cruz de La Palma, there is a much bigger gap between the top three production boats.

Melwin Fink (920 – SignForCom) crossed the finish line first with a lead of 19hr12 over Christian Kargl (980 – All Hands on Deck) and 25hr52 in relation to Hugo Dhallenne (979 – YC Saint Lunaire), respectively second and third in this first act with its most unlikely scenario.

This is a scenario in which the leader continued racing, whilst the remainder of the podium made a pit-stop in Portugal and all his rivals made the collective decision to put into port to avoid a front rolling in offshore of Cape Finisterre.

It is still anyone’s game prior to round two of course, but for the German skipper it was clearly a case of snapping up the opportunity whilst the going was good.

“I was dreaming of a top ten before I set sail, and here I am, on the first boat to make La Palma, with a significant lead over the second boat. I can’t believe what’s happened to me. It’s crazy,” commented Melwin Fink on his arrival in the Canaries.

Aged just 19, he became the youngest skipper and the second skipper of German descent (after Isabelle Joschke in 2007) in the race’s history to win a leg (prior to the jury’s decision).

Was it a heist or a stroke of brilliance? Opinion is divided. In any case, the skipper of SignForCom clearly made the break on the fourth day of racing, shortly after Cape Finisterre. He rounded in 17th position, some 16.3 miles astern of the then leader, Gaël Ledoux (886 – Haltoflame – Ilots.site).

“After I received the severe weather warning, I heard the discussions over VHF, but I hadn’t grasped the fact that certain sailors were considering seeking shelter 36 hours before the front was due to roll through. I thought it was too early to think about putting your race on hold at that point.

“I spoke with Christian Kargl. Together we decided to go as far south as possible and then, at the appropriate moment, could decide whether to go into a harbour or not. As we progressed along the racetrack, we realised that, as detailed in the weather report, the conditions to the south of the latitude of Porto were manageable. As a result, there was no reason to stop”, stated Melwin.

This account was later corroborated by Kargl. “After Cape Finisterre and the issuing of the Severe Weather Warning, everyone was quite nervous and there were a number of discussions over VHF about the bad conditions rolling in.

“I tried to find a spot in a marina, but I wasn’t able to get any confirmation on that, so I waited a while and then got chatting to Melwin, who told me the weather would be more manageable to the south of Porto.

“Each of us decided to continue on our way and then review the situation according to the next weather report. At that point, we received confirmation that the further down the Atlantic we got, the less wind we’d have, so we said, ‘Let’s go,’.

Deprived of an SSB from the second day out, after it took on water, the Austrian made no secret of his surprise at finishing second in the first round. The reason for this was that having made a 15-hour pit-stop in the Portuguese port of Viana do Castelo to sort out his electronic black-out issues, and then waited for the front to roll through, the solo sailor imagined he would cross tacks with his playmates again on heading back out to sea.

“It’s great to finish second, especially with such a lead over the third boat and the rest of the fleet,” enthused Kargl who, having finished 31st in the 2005 edition of the Mini Transat, is this time targeting a top ten place. His performance means that his dream is very much alive. However, the second leg is still a hefty chunk at 2,700 miles and the die is far from cast.

Hugo Dhallenne is all too aware of that fact, which is why he sailed pedal to the metal on the section of racetrack between Baiona and Santa Cruz de La Palma.

“After the brief stop in Spain, which virtually the whole fleet decided to make to allow the cold front to roll through offshore of Cape Finisterre, we had to get going again. Then we really had to get a shift on to get down here as quickly as we could to limit our deficit, in relation to the top two, as much as possible with a view to the next leg.

“I really went for it. I didn’t get a lot of sleep and I didn’t manage the machine very well either,” said the skipper of the Maxi 6.50, who spared neither his effort nor his steed to get back on the scoreboard. He has unquestionably made quite an impression, really banging the point home with regards to his status as the circuit’s strongman.

Sailing with his foot to the floor, perfectly in step with the numerous fluctuations in the breeze, he posted a considerably higher average speed than that of his rivals. Dhallenne made up around 30 miles a day on the two leaders and stole a march on his pursuers to boot.

Any regrets about putting his race on hold temporarily?

“I believe we were right to put into port, let the front roll through and then set sail again. That way, we didn’t have to call in a helicopter, there were no problems and that’s the most important thing”, he assured.

The skipper made the most of his stopover to resolve some issues with his boat’s structure, the mast wand and the autopilot control. The damage occurred during the passage of the first front, in the Bay of Biscay.

“Would I have continued without that? It’s fair to say that in the second front, with the bottom of my boat delaminating, it would doubtless have been a bit tense,” Dhallenne admitted.

One thing for sure, whatever happens next, we haven’t heard the last of him!